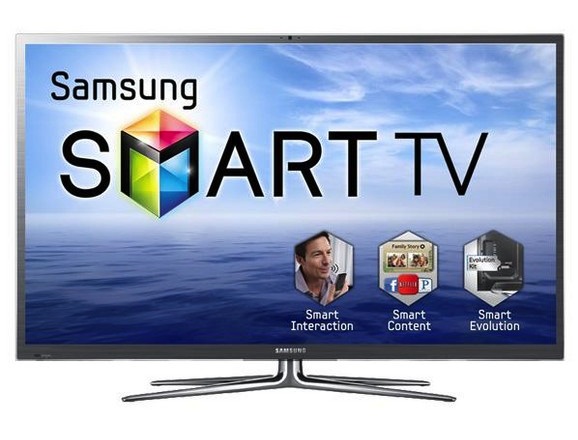 Apart from a stunning picture and sheer screen size, the PS60E8000 also has smart interactions to control the panel with your voice and gestures.

And being a smart TV – the device also has the connectivity to access a wide range of content, catch-up TV services and apps.

The Samsung PS60E8000 60-inch plasma has a sleek look and a thin frame – not as thin as those found on smaller LED models – but thin enough to allow viewers to focus on nothing but the spectacular picture.

The large 152cm full high definition display sits on a four-pronged stand which allows the screen to be easily turned to face in the desired direction.

It doesn’t offer the same svelte lines and thin design as the LED displays but it’s certainly nowhere near as bulky as previous plasma models and, for its size, is still fairly slim.

In the top frame is a camera and microphone to allow for things like face recognition, gesture and voice control.

As we’ve seen with Samsung’s impressive range of smart TVs, the PS60E8000 has smart interaction – gesture and voice control – as well as face recognition to allow individuals to register their preferences.

Now viewers can control the TV by talking to it to change channels, adjust the volume, access the Smart Hub and for other commands.

The camera also comes into play for Face Recognition so the Samsung 60-inch plasma can recognise individual users when they sit down in front of the screen.

The TV can then adjust to their preferences and also allow access to their accounts when making Skype calls and accessing Facebook.

With gesture control, users simply wave their hand in front of the camera before seeing a pointer appear on the screen with channel and volume controls.

Moving your hand shifts the pointer accordingly and making a fist is like clicking the mouse button to execute the command.

The performance and reliability of the smart interaction and smart hub will not be the focus of this review but was covered comprehensively in our review of the Samsung Series 8 LED TV.

The panel also has built-in wi-fi so not only can it access a world of content it can also share the content already within your network using Samsung’s AllShare DLNA (digital living network alliance) technology.

It’s also possible to stream live TV from the 60-inch plasma using Samsung’s Smart View app and a compatible device like the Galaxy S II or the Galaxy Tab 10.1-inch and 7-inch models.

More Samsung devices like the Galaxy S III and the Galaxy Note will also be compatible in the near future.

Having all the smart features and connectivity is great but the thing that will get your attention with the Samsung 60-inch PS60E8000 plasma is the picture quality.

One thing the Samsung plasma offers over other formats is a more natural picture with colours rendered with just the right amount of warmth and brightness.

While some LED pictures are sharp and clear they can sometimes appear artificial because of occasional overpowering brightness.

The Samsung plasma ticks the box for natural skin tones and the main red, green and blue hues.

Contrast was also second to none and black levels, another plasma strength, did not disappoint. Even the detail in dark scenes was easily distinguishable.

We have been testing the Samsung 60-inch plasma watching the London Olympics and saw impressive sharpness and clarity.

And the Samsung plasma also easily handled the fast paced sports action with ease – one of the plasma format’s strongest features – so there was no picture judder or motion blur.

We were also able to take advantage of the 3D capabilities of the Samsung PS60E8000 to watch the Olympics 3D packages.

The lightweight active glasses were hardly noticeable when you’re wearing them and the 3D picture was stunning and smooth.

The picture quality in 2D was clearly evident here in 3D as well.

The Samsung 60-inch PS60E8000 offers excellent value for inch and is cheaper than smaller LED TVs on the market.

But being plasma there is a little more power consumption so, with an Energy Star rating of 4.5 stars, it will cost more to run than an LED TV.

It has all the picture quality, smart TV and networking features of these other LED models but offers them on a grander scale.

With a head-turning picture quality the Samsung 60-inch PS60E8000 is an excellent option of you have the room in your home for a larger television.