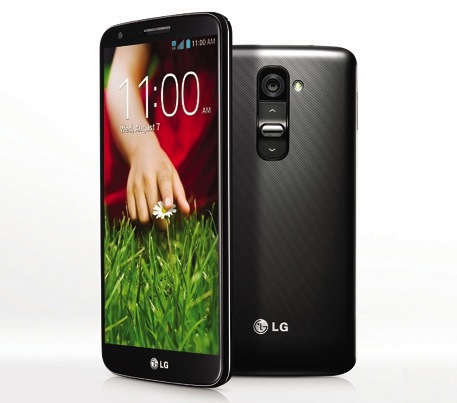 Hands on with the new LG G2 smartphone

LG has unveiled a new flagship smartphone called the G2 with a premium design and features inspired by how users have interacted with their devices in the past.

Tech Guide had a hands-on look at the device which has a 5.2-inch screen, quad core 2.3Ghz processor and a sleek new design.

The device is due to launch in Australia in late October.

The most obvious innovation by LG is relocating the power and volume keys on the rear panel of the device to make it easier to access features, navigate content and capture images.

LG noticed users index fingers naturally rested in the centre of the back panel and decided to put the only buttons found on the G2 on the back.

The G2, with its curved sides, felt good in our hand and the rear button and up and down controls are easy to access whether you are left or right handed.

Volume keys and other buttons on the sides of a smartphone work against one-handed operation because it’s sometimes hard to hold the device and interact with the side buttons at the same time without your other hand coming into play.

And because the buttons are on the back of the G2 there are no other physical buttons on the front or sides of the device.

This not only gives it a cleaner look but also offers more room for the 5.2-inch display to go from edge to edge.

The bezel around the screen is just 2.65mm on either side so you can enjoy a larger screen on a device that can still fit comfortably in one hand.

And because of this, despite having a 5.2-inch screen, the G2 is actually narrower or the same width as some other devices with smaller screens.

Other new features include optical image stabilisation for the 13-megapixel camera plus the ability to capture impressive images in low light conditions.

LG has also worked on the audio quality of the device which will be the first smartphone to offer 24bit/192khz hi-fi playback.

We listened to Hotel California by The Eagles and could easily notice the improved audio quality through a pair of good quality headphones.

The LG G2 is running Android 4.2.2 but also has a new user interface that will change the way we traditionally interact with our devices.

This includes Knock On – which lets you double tap the screen to unlock – and Answer Me where you simply lift the device to your ear to answer an incoming call.

Plug and Pop is a feature that recognises when a pair of headphones have been connected and places a whole row of relevant apps you can use in this mode on the home screen including the music and video player.

Guest Mode gives restricted access to your device if you ever need to hand it off to your child or any other person and keeps your settings and documents safely locked away.

On the battery side, every available bit of space inside the device has been utilised to fit in a larger battery and offer longer usage time between charges.

The LG G2 can also work as a universal remote to control all of the devices in your home.

The LG G2 will have 16GB of storage on board and there is no microSD card slot to expand the memory.

Other countries will be offered a 32GB version but LG has opted for the lower 16GB capacity to keep the cost of the device down for customers.

The G2 will be available exclusively through Optus when it is released in Australia in late October on a range of plans and will also be available to buy outright for $699.