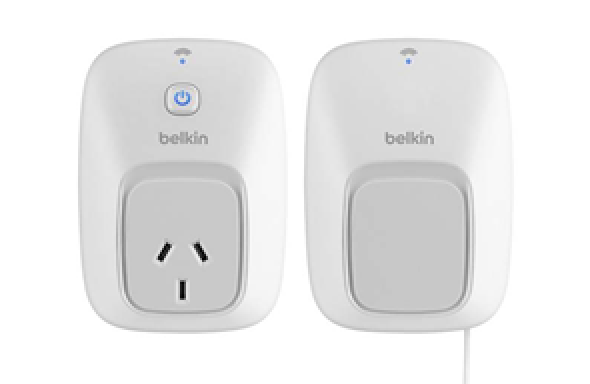 Belkin has introduced a new home automation product called WeMo which allows you to turn home appliances and electronics on or off wirelessly from anywhere.

WeMo is a large wall plug adaptor with a built-in wi-fi connection that allows users to turn the device plugged into it on or off.

For example, a person can plug in their lamp to the WeMo Home Automation Switch and then switch it on or off using the accompanying free WeMo iPhone app.

It’s also possible to add a WeMo Motion Sensor and then set up actions when a person walks past that sensor.

One rule could be that when the sensor detects motion it will activate the WeMo switch and the connected product, in this case the lamp, will turn on.

And the WeMo can be controlled with the iPhone app anywhere where you have an internet connection either in a wireless network or via a cellular connection.

There are lots of appliances and electronic devices which can be controlled with WeMo like lamps, air conditioners, TVs, fans, kitchen appliances, automatic garage doors – the list is endless.

Users can add more and more switches and assign them to control various devices around the home.

For Tech Guide’s testing we set up the WeMo switch to turn our TV on and off.

To set this up we had to connect the WeMo plug into a powerpoint and connect wirelessly to the WeMo device using the app.

The next step was to connect the home’s network to the WeMo app. Once this was completed I could assign the WeMo Switch a name to make it easy to identify.

Now I could hit the on button to turn on the TV using the app and turn it off again.

Switches are clearly marked as on within the app so there’s no question about what’s running in the house.

Ever left the house and wondered if you left the iron on?

Well if it’s plugged into the WeMo Home Automation Switch, the WeMo app can not only let you know if it’s on or off but also allow you turn it off no matter where you are.

The actual WeMo plug itself, while being quite handy, is also pretty large and it will hog any power point it’s plugged into. If it’s a dual plate you won’t be able to plug anything next to it.

Syncing the WeMo Motion Sensor was just as easy as to connect the Switch but took a few tweaks to set the rules.

For example, for our testing we set the rule that the WeMo Switch – which the TV is connected to – would turn on when the sensor detected us walking into the room.

We had to stipulate the rule for the sensor should apply all day and every day even though we had choices to set up specific days and times when it would work.

A user could, for example, set up that rule between 5pm and 6pm when they got home from work.

In this Christmas season we also successfully set up the lights on the Christmas tree to turn on when we walked past the sensor between 7.30pm and 8pm when it was starting to get dark.

The WeMo app worked well but was flaky at times, taking a long time to switch pages and it was also sometimes non responsive.

We were also told there was a firmware update available via the app and despite agreeing to go ahead with it, we were continually reminded about the same update several times.

But in the grand scheme of things these were only minor issues that didn’t detract from the concept of the product.

WeMo works and works well and makes it easy to control your home’s devices from the palm of your hand.