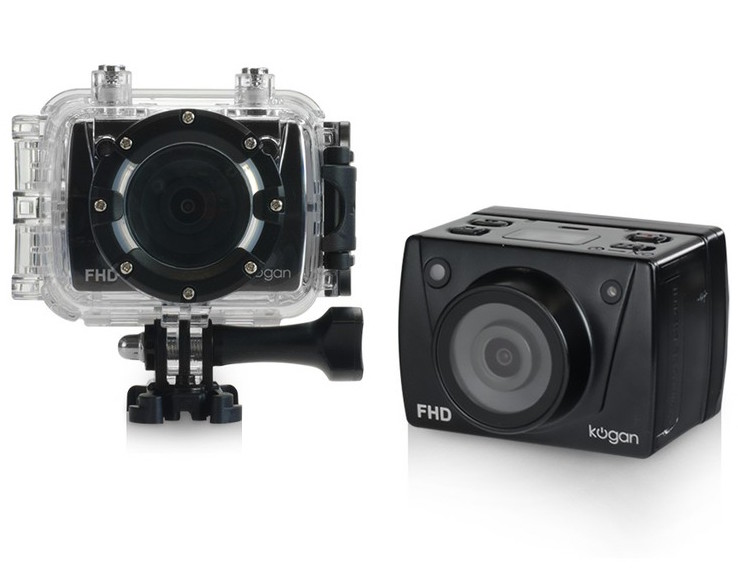 The Action Camera 3+ is the latest example of Kogan taking an already popular product and creating a cheaper and better value version for its many customers.

This time out the company decided to release the Kogan version of the GoPro – the camera you can mount virtually anywhere to capture all of the action.

Action Camera 3+ allows users to record up to 1080i high definition video at 60fps (frames per second) and capture 8-megapixel pictures.

And it comes with a screen that clips onto the back of the unit along with a waterproof housing that can go to a depth of 100m.

Weighing just 110g, the Kogan Action Cam 3+ can be connected to anything to capture your experience.

The product is slightly larger and chunkier than a GoPro but still compact enough to go anywhere.

The Silver edition of the Kogan Action Cam 3+ is priced at $149 and only comes with the waterproof housing but the Black Edition – priced at $159 – also has a windscreen mount, handlebar mount and helmet strap.

The latest GoPro Hero4 models are priced at $549 (Silver) and $679 (Black) and come with added features like wi-fi connectivity, dedicated apps and higher video resolution and still capture.

GoPro also has a new affordable entry-level model for $129 that is also built into a waterproof housing.

The Kogan Action cameras have been made with the familiar mounting system that means it will be compatible with most GoPro mounts.

We tried attaching the Kogan camera to a GoPro mount and – after a little effort – we were able to connect it.

It didn’t connect as smoothly or effortlessly as the GoPro system but we eventually got the mounts to fit together.

The Kogan Action camera also has a tripod mount if you want to position the device without the housing.

Once sealed inside the housing, the device was easy to operate with dedicated buttons to stop and start recording and to snap pictures.

There is an onboard microSD card slot that accommodates cards of up to 64GB capacity.

There’s also an onboard microphone that didn’t produce the best audio but users also have a choice of connecting an external microphone.

The other controls like the on/off switch and the buttons to review your pictures and videos are only accessible when the housing is removed.

The device has built-in advanced image stabilisation but there were still some shakes but nothing that made the videos too hard to watch.

But there was still enough shake in our videos for YouTube to offer to help us to get rid of them.

Also on-board is a G-Sensor so it can be set to start recording when it detects motion and stop again when it doesn’t.

A quick and easy way to make sure the camera is pointed in the right direction is with the built-in laser pointer that sends its beam wherever you aim the device.

We shot a video with the Kogan Action Cam 3+ Silver Edition along with some still images and found the results to be decent for the price.

Footage captured with the device was clear and sharp with decent colour reproduction and quality.

It wasn’t the same broadcast quality as the video the GoPro can produce but it was still quite respectable.

The Kogan Action Cam 3+ offers plenty of bang for your buck and produces decent results for the price you pay.

No, it’s not in the same league as the GoPro but it’s also several hundred dollars cheaper than those Hero products.

If you’re looking to capture your adventures on the go or give your kids a fun new way of recording their fun in and out of the water – the Kogan Action Cam 3+ can do the job without breaking the bank.