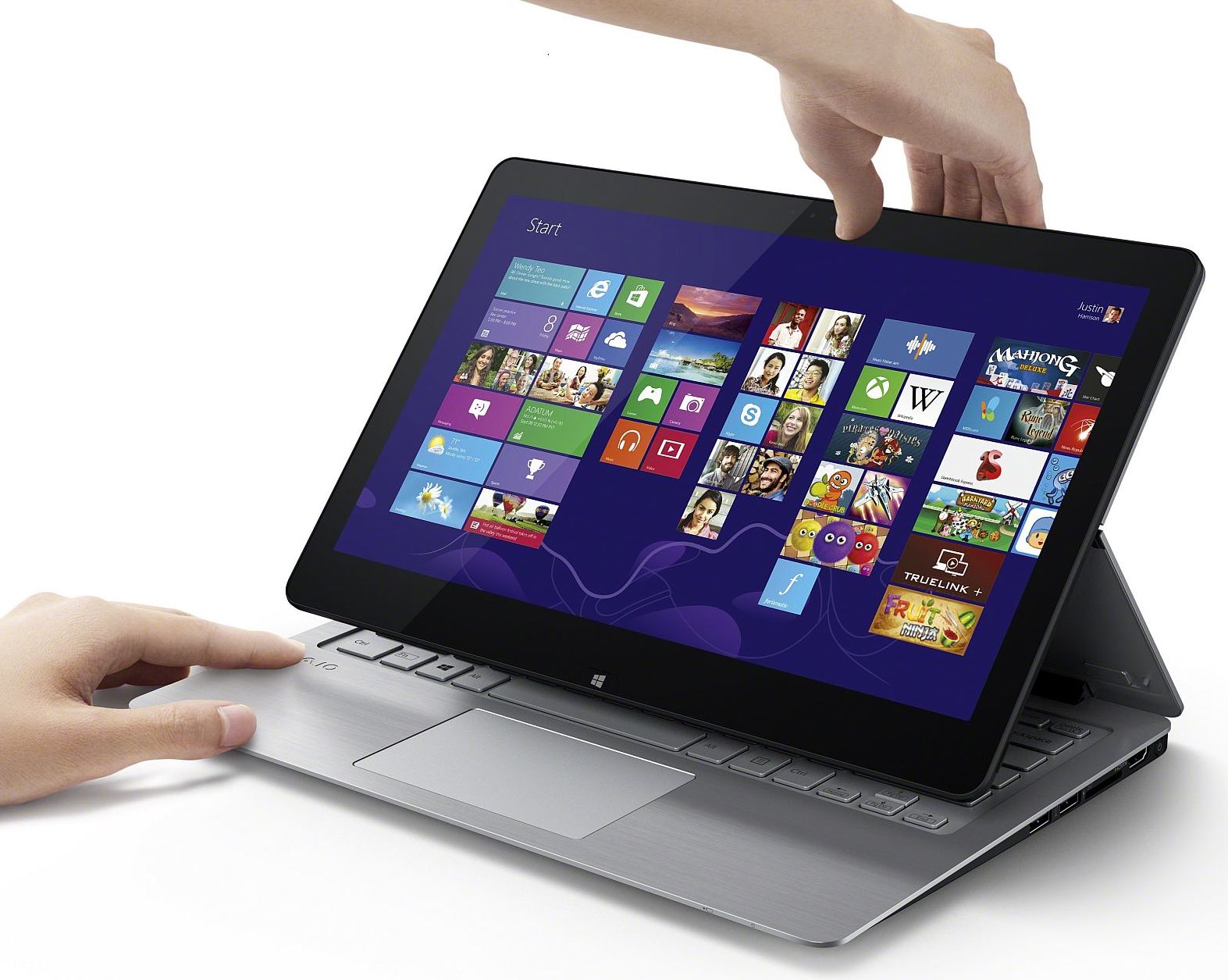 Sony’s Vaio Fit is a convertible device that’s a laptop, a tablet and a viewing stand in one that can change shape in seconds like a Transformer.

The product’s versatility and flexibility is all thanks to a revolutionary hinge design.

But at first glance, the Vaio Fit 13 (it’s also available with a 15-inch screen) looks like a regular laptop.

In fact, it could pass for an ultrabook because it’s still pretty thin – 14.3mm – and also fairly light at 1.31kg.

And for those in the market for a new laptop or a tablet, Sony’s 13.3-inch Vaio Fit can be the product you buy if you can’t decide because it’s actually both.

The 13-inch Sony Vaio running Windows 8 we were sent for our review is well built with high quality materials.

It has a silver lid with a black line across the centre. This is where the hi-tech hinge is located.

Open up the device and you see the full high definition 13.3-inch display but no sigh of that hinge.

Instead, in this laptop mode, you will see the silver brushed metal surface surrounding the full six row backlit qwerty keyboard.

The keys are spaced apart nicely with a large track pad and wrist rest for comfortable typing.

The display is also sharp and bright and as pleasing to the user whether it’s displaying a web page, a presentation, pictures, movies and apps.

But it’s the screen’s acrobatics that impressed us most.

That central hinge gives the display the ability to swing 180 degrees and give the user the choice of mode that’s most suitable to the task at hand.

In laptop mode you have access to the keyboard to allow users to create and edit those complex documents.

Bit if you just wanted to kick back and relax with the device in your lap like a tablet, a shift of the screen does the trick.

Then it’s simply a matter of folding the screen back down on top of the keyboard and you’re now in tablet mode.

And the screen automatically adjusts so the user can have the desktop sitting the right way.

The accelerometer on board also makes it easy to shift from landscape to portrait mode before the screen adjusts to suit the user’s view.

In this tablet mode, the device now has a wedge shape with the thinner edge closest to the user giving it a nice shape to hold.

Users can also operate the device through the touchscreen (the screen also has touch controls in laptop mode).

This means of the ports are still easily accessible no matter what mode the Sony Vaio Fit is in.

Along the left side is the headphone/microphone jack plus the power port while the right side has the on button, an SD memory card slot, a HDMI out port and two USB 3.0 ports.

Sony’s Vaio Fit can also be positioned into a viewing mode as well which is simply just a matter of flipping screen over and keeping it folded up like you would in laptop mode but the screen is now facing the opposite direction.

Now if you turn that towards yourself all you see is the screen so if there’s a presentation you want to give, a slide show or movie you want to watch – you can do it without having to have the keyboard in view.

On the performance side the Sony Vaio Fit is also impressive. Onboard is an Intel i5 4200U processor running at 1.60Ghz with a turbo boost up to 2.60Ghz.

There is also 4GB RAM and a 128GB SSD (solid state drive) under the hood so it’s got enough grunt to power through some intensive work and solid gaming.

We did notice some issues with the Sony Vaio Fit review unit we were sent which, we believe, was an early production model.

The screen would sometimes flicker like it was in the middle of changing modes for a few seconds.

But the second we adjusted the screen to return it into laptop mode again, the problem disappeared.

The Sony Vaio Fit is a refreshing new addition to the range of laptops currently on the market.

The fact that it can hold its own as a laptop and a Windows 8 tablet makes it a versatile device to own.

Scentee lets you sniff out notifications on your smartphone