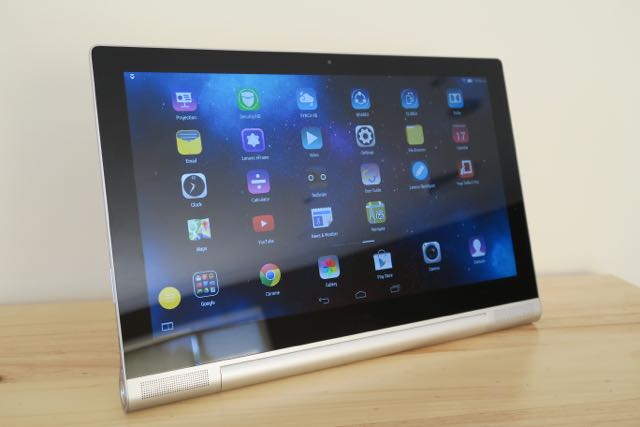 When it comes to tablets most of them look the same and that makes it harder for customers to distinguish between the many models and brands on offer.

But Lenovo has taken the design outside the square with its new Yoga Tablet 2 Pro.

Not only does it have a foldaway kickstand, the device also has a built-in projector to take your content beyond the device’s screen.

The Lenovo tablet has a solid build quality and has a beautiful big 13.3-inch Quad HD display with a resolution of 2560 x 1440 so it’s larger than any other tablet you’ll find. 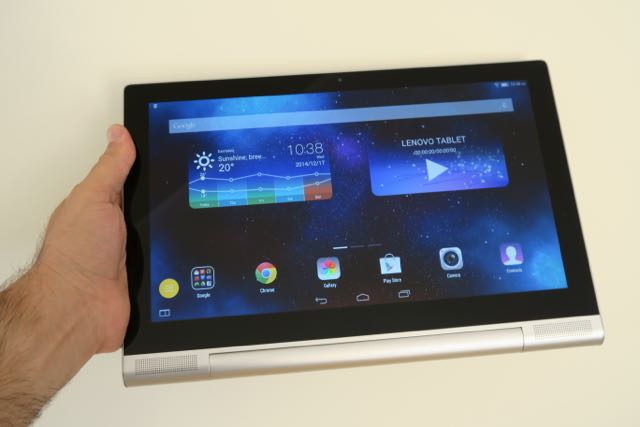 Having a display of this size opens up the options for the right user who needs to use the screen real estate for work or play.

The Yoga Tablet 2 Pro is running Android and is powered by the Intel Atom processor which gives it the credentials to take over many of the tasks you’d usually perform on a laptop. 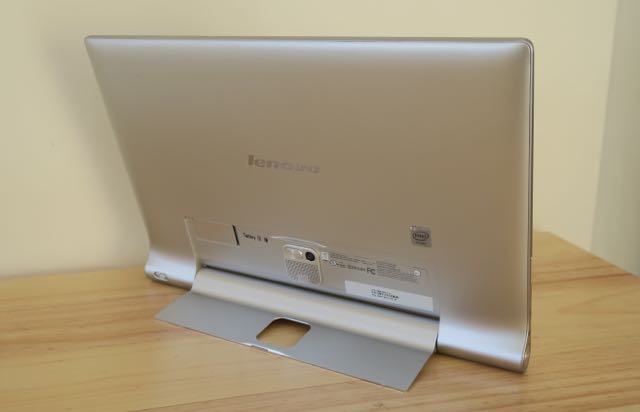 But it’s not just the sheer size of the device that will grab your attention.

The intelligent design of the device has also incorporated a kickstand that can be used to position the tablet in a number of ways.

With the click of a button on the rear side of the product, the kickstand opens and can be positioned in a variety of ways to suit your task. 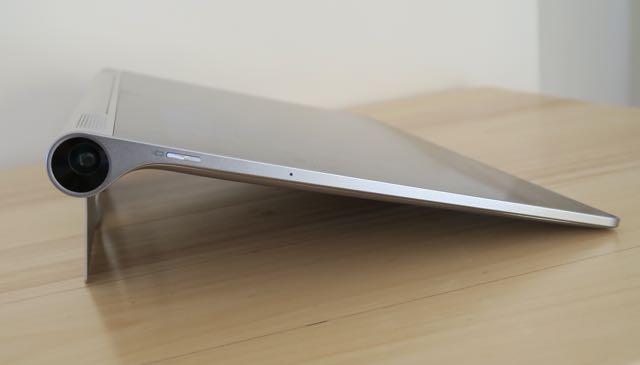 It can be positioned for viewing, for typing and can also be hung from a hook.

Along the bottom edge of the screen is a cylindrical handle that contains the battery as well as a projector that can take what’s on the screen and project it onto a wall or the ceiling.

A dedicated button on the right edge of the Lenovo Tablet 2 Pro activates the built-in pico-projector while a small slider switch at the end of the barrel adjusts the focus of the projected image. 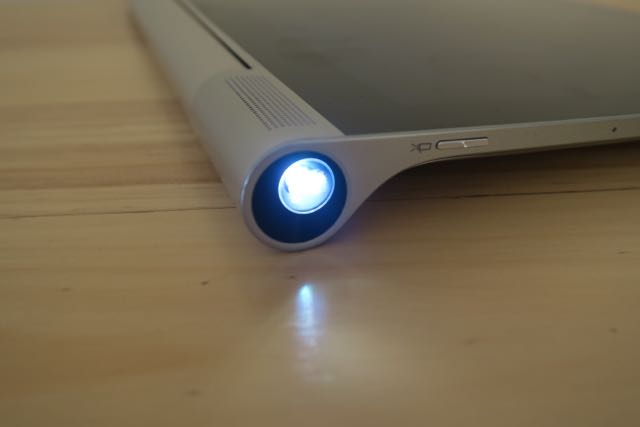 This is useful in a number of ways. You can project your movie or presentation to enjoy on a larger scale or make it easier for multiple people to view.

The size of the projected image can be adjusted by changing the distance from the tablet and the wall.

Take it further back and the image grows. We managed to project a 50-inch image that was both big enough and clear enough to enjoy comfortably. It’s not in the same league as a dedicated projector but still offers decent quality. 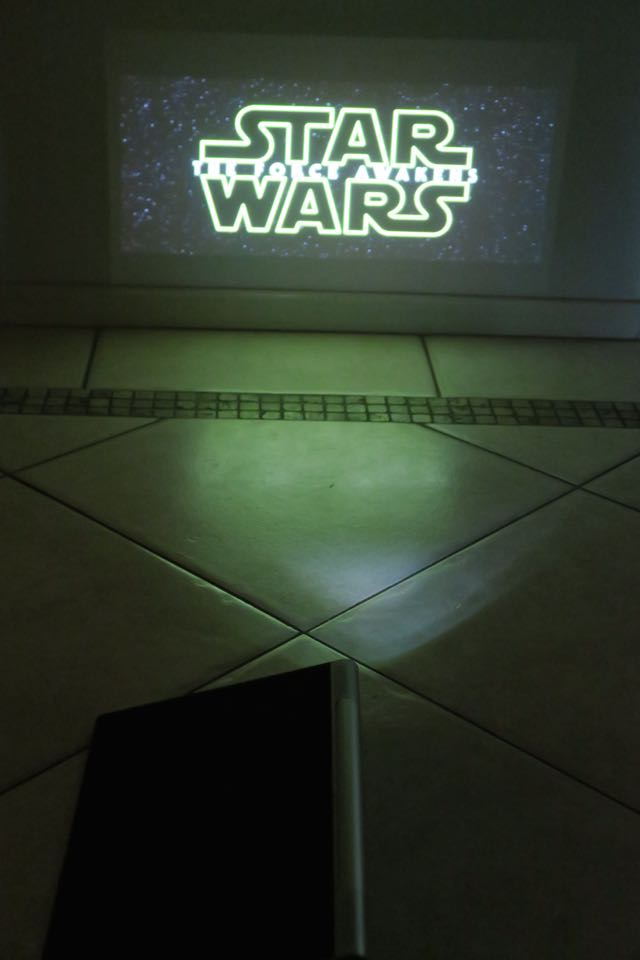 There’s also a split-screen mode where you can project one section of the screen and have another app running on the screen at the same time.

You can also project a live sketchpad so it’s like having your own white board for your presentation or lesson.

And the kickstand also came into play to position the tablet horizontally and project a straight image.

One downside is the actual size of the device so it’s not as easily portable as some other tablets. It’s 33.3cm long and weighs almost 1kg. 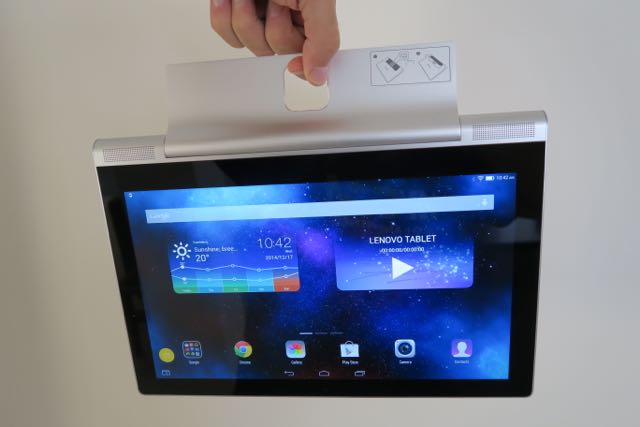 But it’s still smaller than most laptops and customers who opt for a device like this are happy to have a larger screen at the expense of that easier portability.

On the audio side there are front facing JBL speakers and a rear subwoofer with Dolby onboard to provide an excellent sound whether you’re listening to music or watching a movie.

This is another features that sets the Lenovo tablet apart from every other tablet on the market. 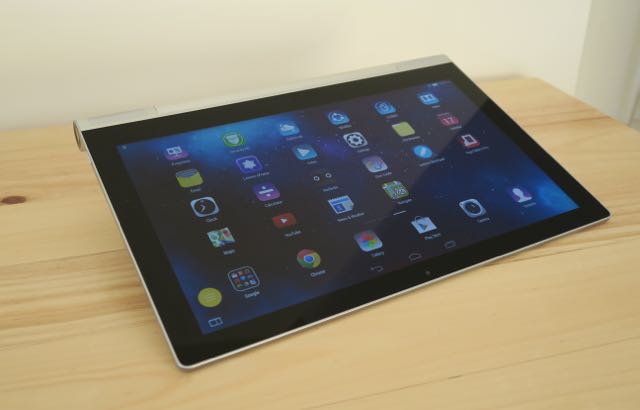 Battery life is also another strength of the device with the rechargeable powerpack located in the same barrel that houses the projector.

The advantage of this is that Lenovo can fit in a larger 9600mAh battery that can run for up to an incredible 15 hours.

For our review the battery lasted for days before we need to recharge it.

The Lenovo Tablet 2 Pro is a well-designed tablet with an amazing larger screen and a kickstand so there’s no need to buy additional accessories or cases. And the addition of the projector makes the device even more versatile.

It is easily one of the most useful and feature-packed Android tablets you can buy.

Tech Guide Episode 127 for the latest tech news and reviews