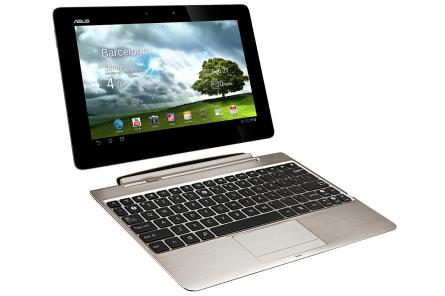 The Asus Transformer Pad Infinity is designed for those who can’t decide between a tablet and a laptop – it’s actually both.

Analysts are already predicting tablet sales will overtake laptops which is why Asus has seen 2012 as the year of transformation.

And the result is the Asus Transformer Pad Infinity TF700T.

Tech Guide has had a hands-on review session with the product.

At first glance the device looks like a netbook complete with a full keyboard and trackpad.

The 10.1-inch screen is sharp and bright and there’s a Tegra 3 1.6Ghz quad core processor under the hood, 64GB internal memory along with the latest Android 4.0 operating system.

But that’s where the laptop similarities end.

A small latch on the hinge releases the screen and now you’ve got a tablet in your hands – the world’s first full high definition Android product.

The actual resolution is 1920 x 1200 – the highest resolution screen ever seen on an Android device.

In tablet mode the Transformer Tab is just 8.5mm thick and quite light. The high definition screen made the apps, images and websites look amazing.

High quality games are also available for the device because it has the magical combination of a high definition screen, a quad core processor and improved graphics performance.

In fact during our demo we connected the Asus Transformer Pad tablet to a full high definition TV to play Sonic the Hedgehog that had all the speed and graphics of a console game.

It’s also no slouch on the audio front with SonicMaster audio technology making your music and movies sound great.

On the tablet there is a 3.5-inch headphone jack, a micro HDMI port and a microSD card reader.

And there are more on the keyboard dock including a USB port and an SD card reader.

Battery life on the tablet is listed as 9.5 hours with the tablet – which is impressive enough.

But when you attach the keyboard dock, which also has its own battery, usage is extended to up to 14 hours.

Speaking of the keyboard dock, it offers an easy way to create and edit documents with the aid of the full qwerty keyboard.

The keys were large enough and spaced far enough apart for easy typing.

And when the keyboard dock is attached to the tablet you see something you don’t normally see on a tablet – a pointer which can be navigated using the built-in trackpad.

The tablet’s touchscreen was also still active while it was docked as well so it’s possible to just touch the screen to activate an app if you didn’t want to use the trackpad.

Also included is App Back-Up so apps can be backed up along with all of their associated information and files like game levels and trophies.

The device is wi-fi only and does not have 3G connectivity. Users will have to set up their smartphones as a wi-fi hotspot fo the device to connect to the internet using 3G or 4G networks.

The Asus Transformer Pad Infinity TF700T is available now and is priced at $999.