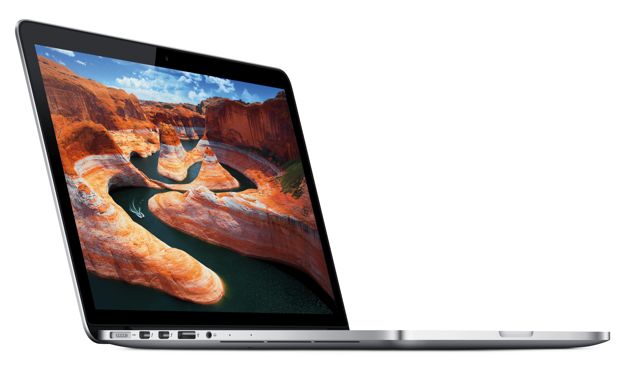 Apple chose wisely when it decided to upgrade its 13-inch MacBook Pro – it does happen to be the most popular laptop the company sells.

And as Apple has a habit of doing, it has made an already good product even better by making it faster, thinner, lighter and by adding a knockout Retina Display.

The new 13-inch MacBook Pro with Retina Display is also running the latest Mountain Lion operating system and follows on from the popular 15-inch model which was introduced mid year.

The device is just 1.9cm thick and achieves its slender looks by doing away with the CD/DVD optical drive and by replacing the regular hard drive with flash memory.

To achieve a thinner look, Apple had to be creative with the design to deliver higher performance within a smaller form factor.

There is no more optical drive so there was a fair amount of space saved right there and the flash memory 90 per cent is smaller than a regular hard drive.

Every millimetre of space under the anodised aluminium hood has been utilised while packing a faster processor, higher quality speakers and a battery that last up to seven hours.

The result is a MacBook Pro that’s 20 per cent thinner and half a kilo lighter than the previous model. It’s actually the lightest MacBook Pro Apple has ever produced.

The general look of the device is almost identical in terms of the generous trackpad and the backlit keyboard.

There are air vents built into the sides of the base as well as near the hinge of the screen.

The laptop’s cooling vents are also utilised by the internal speakers to provide a surprisingly good audio output.

Around the 13-inch MacBook Pro’s screen is a black frame that is indistinguishable from the display when it is turned off.

But when you do turn the screen on, you’ll be looking at the standout feature of the product – the remarkable Retina Display.

At a resolution of 2560 x 1600, the device has twice the resolution of a full high definition television with a combined pixel count of more than four million.

On the connectivity side there are now two Lightning ports, two USB 3.0 ports, dual mics, a headphone jack, HDMI and an SD card slot.

Despite the svelte looks, the MacBook Pro still offers a powerhouse performance thanks the latest 2.5Ghz Intel dual core i5 processors which are configurable to i7 and up to 3.6Ghz.

From the time we hit the on key it took just 12 seconds to boot up and be ready to get to work.

The first thing a user is presented with is the eye-catching Retina Display which makes everything look ultra sharp including text, images, videos, apps and web pages.

The added sharpness of the screen and the power of the onboard processor will appeal all kinds of users with all kinds of tasks.

And the Intel HD Graphics 4000 processor will help images and videos run smoother than ever. It even allows for one or two displays to be connected to see your work on a larger screen.

A photographer for example will not only be able to see their images with so much added detail but they will also be able to load the images into the system quicker thanks to the combined strength of the faster processor and the Lightning ports which import and export hundreds of images in seconds.

We were able to load more 100 images from an SD card in about 20 seconds and also edit them within seconds.

The 13-inch MacBook Pro will also power through larger RAW photo files in seconds as well.

Same thing goes for video editing. Not only can the 13-inch MacBook Pro’s Retina Display render the video clearly and accurately, the Lightning connector can also get large high definition video files on and off the device in seconds.

Designers will appreciate the extra pixels of the Retina Display so they can see their work more accurately as well as rendering images and applying filters at high speed.

And the 13-inch MacBook Pro with Retina Display is not just all about work. The sharp screen is also a great way to see and play your favourite games.

And not having an optical drive means you either get your files on and off the device wirelessly or via the speedy Lightning or USB 3.0 ports.

In terms of battery life the challenge was to provide a long life battery while having such a small chassis to fit it in.

But Apple passes this test with flying colours and we were able to get slightly more than the promised seven hours of battery performance with medium to heavy use and always connected to wi-fi.

There is no doubt the 13-inch MacBook Pro with Retina Display is one of the most attractive and powerful laptops on the market today.

It has the looks, performance and the brains to provide a very rewarding experience to the user.

But these breakthrough features come at a price with the entry level model not providing too much change out of $2,000 at $1,899 with 2.5Ghz dual core Intel processor, 8GB RAM and 128GB flash storage.

Users can only have 8GB RAM onboard and if you want to increase the flash memory from 128 to 256GB that will set users back an added $300.

You’re also limited to dual core processors with the 13-inch model so if you’re looking for quad core performance you’d have to look at the 15-inch model.

But that said, the 13-inch MacBook Pro with Retina Display is one handy unit that promises to be just as popular, if not more popular, than the previous model.

Mobile phone complaints to Ombudsman increase by nine per cent