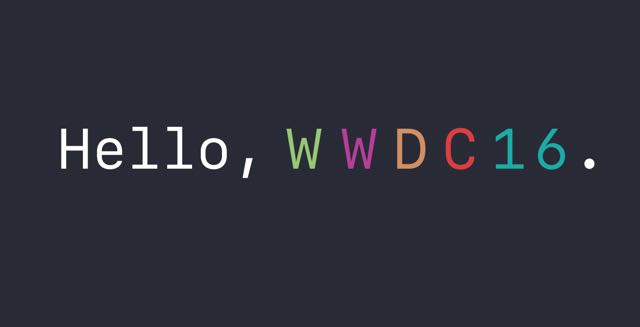 Apple 2016 Worldwide Developers Conference kicks off next week in San Francisco with a keynote from company CEO Tim Cook. But what new software and hardware can we expect to see?

Traditionally WWDC has been focused almost exclusively on software, namely latest iOS for the iPhone and iPad and the OS X operating system for the Mac.

But we have seen a sprinkling of hardware announcements in the past including the iPod Touch (2008), the iPhone 4 (2010) and MacBook Pro with Retina Display (2012).

Yes, we’re up to double figure with iOS. The iPhone and iPad software was named iOS for the first time back in 2010 by Steve Jobs after previously being called iPhone OS.

Design-wise, the iOS hasn’t had a dramatic makeover since iOS 7 but iOS 10 could change all that.

There will reportedly be a dark mode to allow users to have a black background instead of white along with massive changes to the Apple Music app.

Rumours indicate the iPhone 7 will have a dual-lens camera, and the new iOS 10 is set to have several photo enhancements like easier editing, touch-ups, brightness adjustments and a feature that will allow user to draw and write on their images.

Siri is also expected to be heavily involved with the iOS changes this year with high expectations that it will be accessible to developers to integrate Siri voice control into third party apps.

Other whispers indicate Siri could also become part of an iCloud Voicemail service so it can answer your missed calls for you and transcribe the responses into messages.

The El Capitan update to Mac OS X last year was only a light one so this year we’re expecting a more comprehensive update.

We believe it will involve Siri finally coming to the Mac so you can talk to it just like you would with your iPhone or iPad.

Another rumoured feature is the ability to unlock your Mac with your iPhone instead of having to key in a password each time it starts up.

It works in a similar way to the way the Apple Watch is unlocked with the paired iPhone is unlocked.

The Apple Music changes we’re expecting in iOS 10 will almost certainly carry over to the new OS X 10.12.

And what will the new OS X will be called? In the past we’ve had Mavericks, Yosemite and El Capitan.

They are normally named after Californian landmarks. What that will be is anyone’s guess.

But we’ve also heard reports that Apple may even abandon this naming convention and change the name simply to macOS to match iOS, watchOS and tvOS.

We are also likely to hear about updated versions of tvOS and watchOS as well.

The biggest rumour around the hardware that may be unveiled at WWDC 2016 is an updated MacBook Pro with a new USB-C shaped Thunderbolt 3 connection.

We’ve also heard suggestions of a new MacBook Air model and a revamped iMac as well.

Tech Guide will be on the ground in San Francisco for Apple’s Worldwide Developer’s Conference so stay tuned to our site for comprehensive reports on all of the announcements.

This new Catalyst Case can make your Apple Watch waterproof

How to make your own craft beer with the WilliamsWarn BrewMaster