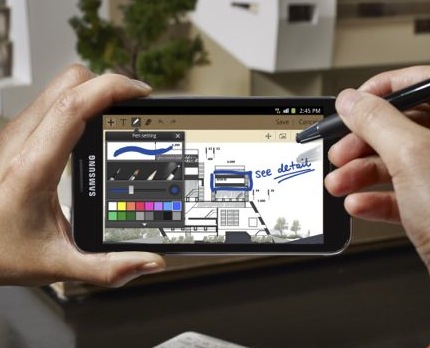 Is it a smartphone or is it a tablet? The Samsung Galaxy Note with its large 5.3-inch screen is actually both and is available this week from Optus and Vodafone.

Telstra customers will have to wait until April to get their hands on the product.

The Galaxy Note represents a new class of device for Samsung and gets the Note portion of its name because users can use the included S-Pen to write directly on the screen.

The device, which is just 9.65mm thick and weighs 178g, is like an overgrown version of Samsung’s Galaxy S II with the same Android operating system and all of the features we’ve seen on the hugely successful smartphone.

It has a 5.3 Super AMOLED display which offers a larger area to browse the web, view pictures and videos, read your emails and enjoy your apps.

The Galaxy Note adds a range of specially-designed apps and features which take advantage of the ability to write on the screen with the S-Pen.

These include drawing apps like ZenBrush and OmniSketch which can turn the Galaxy Note into a sketch pad or a note pad.

S-Memo is an included app on the Galaxy Note which can include pictures, voice recording and handwritten notes on the same document and shared.

It’s also possible to write on things like photographs and maps and share these with your contacts.

Samsung’s Galaxy Note also has built-in handwriting recognition software so users can choose to write on the screen rather than type in text entry areas.

The device has a dual core 1.4Ghz processor and an 8 megapixel rear camera and 2 megapixel front camera.

There is 16GB of internal memory plus a microSD card slot to expand that storage by up to 32GB.

The Samsung Galaxy Note is available through Optus and Vodafone this week.

Optus is offering the device on $0 on a $79 plan while Vodafone deals start at $5 a month on the $59 monthly plan.

Telstra will announce its plans closer to its April release date.