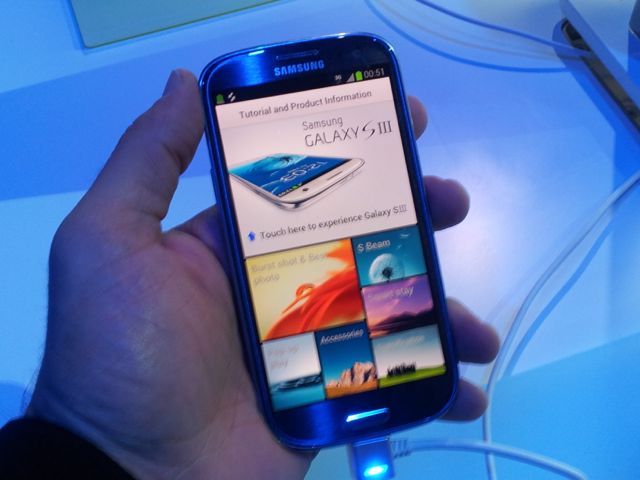 Samsung’s new flagship smartphone – the Galaxy S III – is available to customers now after a dazzling launch event at the Capital Theatre in Sydney.

Samsung sprang a huge surprise at the launch and announced the device would be available today through Vodafone, Optus, Virgin and Telstra on plans starting at $49 a month.

Samsung’s Galaxy S III has a host of new and innovative features including a 4.8-inch Super AMOLED display, an 8 megapixel camera, a 1.4Ghz quad core processor and a long-life 2,100 mAh battery.

Surprisingly, the Australian version of the device will not be 4G compatible with Samsung announcing plans to release a 4G version for Telstra customers in the near future.

Tech Guide had a hands-on session with the device and was surprised by how thin the device is – just 8.8mm and how light it was – 133g.

The device feels good in your hands and has a bright screen which displays crisp pictures, movies and websites on the screen.

And in the short time we were able to use it, the speed of the 1.4Ghz quad core processor was obvious with apps and menus opening and closing quickly and scrolling screen to screen was effortless.

The device is running Android 4.0 and is only 16 per cent larger than the Galaxy S II despite having a screen that is half an inch larger.

The Galaxy S III is also almost the same width as the Galaxy S II thanks to the thin bezel around the display.

Other features of the Galaxy S III include Smart Stay which keeps the screen from dimming by using the front camera to see if the user is actually looking at the screen.

The device also has full voice control with user able to search and issue commands just by talking to it.

There’s also Direct Call which recognises your motions to make a call. If you’re in the middle of a text and decide to call the person – all you have to do it bring the device to your ear.

The 8 megapixel camera has burst shot to captures 20 frames at once, best photo to automatically to choose the best image and buddy share which can share the image based on facial recognition and send it to your friends via MMS.

The camera has zero shutter lag and takes just 990ms to get into camera mode.

Another cool feature which showcases the speed and strength of the 1.4Ghz processor is the Pop Up Play feature.

With Pop Up Play users can play a video and then perform a second task at the same time while the video is still playing in a smaller window which can be moved anywhere on the screen.

Quickflix also announced its movie streaming app will also be included as a built-in app on the Samsung Galaxy S III.

The Samsung Galaxy S III is available in 16GB and 32GB capacities and available today from Telstra, Optus, Vodafone and Virgin.

Tech Guide will post a full review of the Samsung Galaxy S III this weekend.