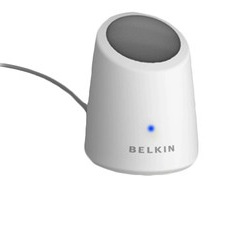 Belkin has undergone a transformation with a brand new logo and branding unveiled at the Consumer Electronics Show in Las Vegas.

The company also revealed a new direction with the launch of a new home automation product which changes how we interact with our products.

WeMo, is a new wireless system which allows users to control their products with their smartphone from within their home or over the internet.

Initially Belkin’s WeMo system will consist of a Home Control Switch and a Motion Sensor and all you need is a wireless home network and a free smartphone app.

The WeMo Home Control Switch connects to your home’s wi-fi connection and plugs into any power point and then any product can be turned on and off from anywhere using a dedicated app on your iPhone.

Users can also set times for the plugged in devices to be turned off and on.

It’s also possible take photographs of the products attached to the WeMo Hoke Control Switch and assign them to iPhone app’s control panel to make them easier to identify.

This can also work with the WeMo Motion Sensor so it can be included in the rules set for the device.

Maybe you like certain appliances like lamps, a coffee maker, a heater on or off at certain times of the day or night – the WeMo system makes it a breeze with the iPhone.

It could even be attached to a doorbell or even a doorlock.

With the addition of a WeMo Motion Sensor could be set up in the hall way leading to the garage so when someone passes by heading to their car it will automatically open the garage door.

Speaking of garage doors, Belkin demonstrated one use of the WeMo system being attached to a garage door opener.

In it stand at CES there was a live video feed of the garage door which happened to be all the way in Redondo Beach in California.

There was a even a clock in shot so we could see it was a live video stream. The person on the Belkin stand, all the way at CES in Las Vegas in Nevada, showed us on the iPhone app that the status of the garage door was open.

He tapped the device in the app and the status changed to “closing” and on the screen a second later we saw the garage door gliding shut.

Belkin’s WeMo system brings the sophistication and the possibilities to the consumer in a way that can be easily installed and expanded as your needs grow and change.

“WeMo is designed to make the technical part of life easier, so you have more time to enjoy the spontaneous and organic moments in life that we all cherish. It’s home automation for the rest of us.”

Later in the year Belkin will introduce a WeMo Baby Monitor which will be able to hear and detect the different types of a babies cries based on pitch, volume and duration.

And when it does it can send alerts to your phone.

Parents may find that playing music or activating the musical mobile above their cot may soothe the child to go back to sleep so can program these actions through WeMo.