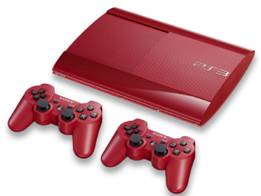 Sony Computer Entertainment Australia has introduced two new colours to the PlayStation 3 – Azurite Blue and Garnet Red – to add a bit of colour to your gaming.

The new colourful consoles will be available on February 21 and will have the smaller and slimmer form PS3 factor which was unveiled in September last year.

Each system will include two controllers and will be available from select retailers for a limited time.

The release date of the Azurite Blue and Garnet Red PlayStation 3 consoles comes a day after a scheduled Sony event set down for February 20 which many are anticipating to be the unveiling of the PlayStation 4 system.

The PlayStation 3 high definition gaming platform has been around since 2006 and sold more than 70 million units worldwide.

The PS3, apart from being a gaming console, is also an entertainment hub with the ability to play 2D and 3D Blu-ray Disc movies as well as access movies, music and games through Sony’s portals.

Retro Tivoli Audio Model One AM/FM now has Bluetooth onboard