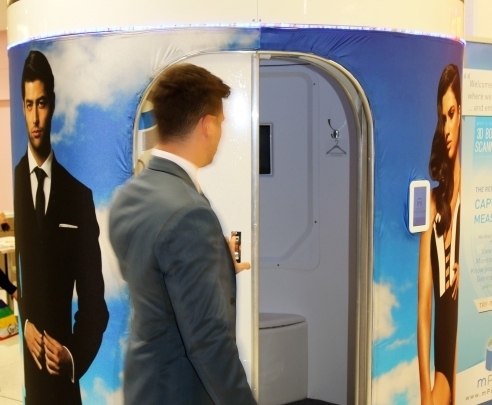 New 3D body scanner can measure you for clothing in seconds

Getting measured up for a suit can now take a matter of seconds thanks to new 3D body scanning technology developed by Australian company mPort.

The 3D body scanning booths are set to be rolled out in shopping centres around Australia to make it easier to take accurate body measurements for clothing.

Online tailor InStitchu is one of the first tailors to take advantage of the technology and fuse the system with their online purchasing system.

The mPort 3D scanner looks like a cylindrical booth and once the customer steps inside it captures their measurements instantly and stores the data in an InStitchu profile.

The customer can then go to the InStitchu website and design their suit right down to the colour of the buttons and the stitching before a team of Saville Row-trained tailors create the suit to your measurements.

Once completed the suit is delivered to the customer with the whole process taking just a week or two.

“Our goal has always been to make quality tailored suits accessible to all men. To achieve this, we’ve relied upon technology and a smart business model. We’re genuinely excited to have partnered with mPort to deliver this exciting retail innovation to the Australian menswear market.

“Only a few years ago, the suit shopping experience was vastly different. Options in Australia were incredibly limited,” says InStitchu co-founder Robin McGowan.

“Some men could afford to fork out the thousands needed to have a suit tailored, but most men relied upon department stores and old-fashioned menswear retailers, generally consigning themselves to ill-fitting, off-the-rack suits.

“Making the necessary adjustments to these suits was time-consuming and expensive, so they simply put up with badly fitting suits.

“When InStitchu launched, we were able to open the market up for these guys, enabling them to create their own, quality suits at a fraction of the cost that they had been paying.

“Although the online measuring tools have been well received, there’s still a lot of men out there hesitant about measuring up on their own.

“The 3D body scanning technology from mPort is just what they needed to gain the confidence to purchase tailored suits online.”

The Australian device that can relieve lower back pain