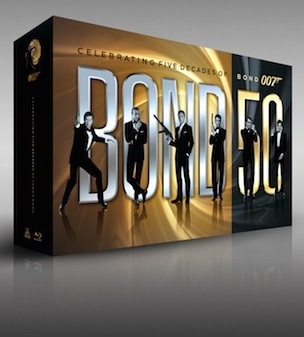 To celebrate the 50th Anniversary of James Bond, 20th Century Fox Home Entertainment will release a Blu-ray collectable box set of all 22 films.

James Bond, which all began with Dr No starring Sean Connery in 1962, is the longest running film franchise of all time.

The Bond 50 collectable boxset was announced on the Panasonic stand at the Consumer Electronics Show and is available for worldwide pre-order from today.

The news of the collection was revealed during a director’s panel discussion at the Las Vegas Convention Centre and included acclaimed Bond directors John Glen (A View To a KIll, For Your Eyes Only, Octopussy, Living Daylights, Licence to Kill), Martin Campbell (GoldenEye, Casino Royale) and Michael Apted (The World Is Not Enough).

Also on hand at the Panasonic CES stand for the announcement were special guest Bond girls Olga Kurylenko (Quantum of Solace) and Caterina Murino (Casino Royale).

The Bond 50 collection also marks the first time nine of the films will be available in full high definition on Blu-ray.

All 22 films will be contained in a sleek package which includes a picture of all six actors who’ve portrayed the iconic James Bond character.

Apart from all 22 films in full high definition, there will also be 130 hours of extra features to satisfy even the biggest Bond fan.

The latest installment in the Bond franchise – Skyfall – will be released in the second half of 2012.