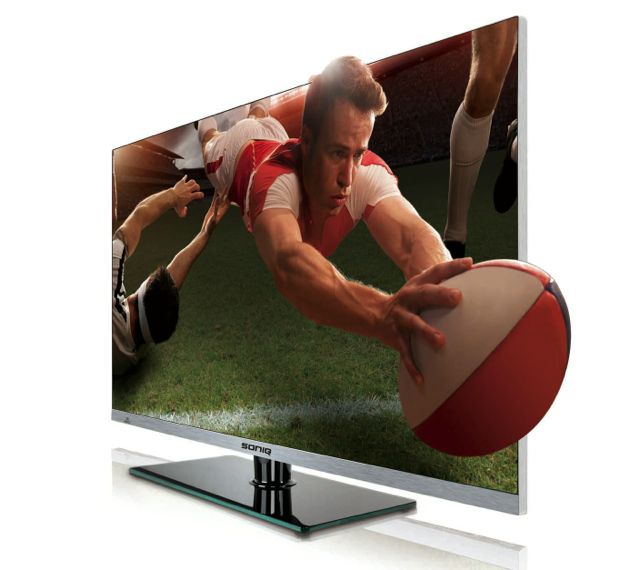 There are a lot of budget TVs in the market that are far cheaper than screens from well-known brands including Soniq’s E55S14A 55-inch borderless TV.

Soniq products are available exclusively in Australia through JB Hi-Fi stores and include audio devices and televisions.

The Soniq 55-inch borderless TV has an IPS (in-plane switching) LED screen with a full high definition resolution of 1920 x 1080.

Design-wise the TV looks pretty sleek with no bezel to speak of so all the viewer sees is the screen.

The biggest part of the frame is along the bottom edge of the screen – and we suspect this is so Soniq could fit its name on the product.

It has a glass table-top stand and can also be mounted on the wall.

Behind the panel is an ARM Dual Core CPU (central processing unit) along with a quad core processor for speedier performance.

You might think that sounds like the specs on a smartphone or tablet and you wouldn’t be wrong because the Soniq TV also uses Android to run apps.

On the smart side the TV can not only run apps it can also be used to browse websites and access online content.

There’s also a USB port to connect your own storage devices to record TV programmes and view your own material.

The smart TV interface was a little cluttered and could have been a little more intuitive and responsive.

What rescued the experience was the Soniq TV’s remote control.

On one side of the controller are your regular buttons and controls while on the other side is a full keyboard and a trackpad button that lets you guide the arrow around on the screen like a mouse.

In fact, it looks exactly like the trackpad key that was used on BlackBerry devices in their heyday.

What it meant was we were able to browse and navigate the browser and smart menu just as easily as we could on our computers and other devices.

What about picture quality? If you’re expecting the Soniq’s picture to look as good as a TV that costs twice as much you’ll be disappointed.

It might not have the polish of the TV that’s twice the price but it still had respectable brightness and contrast.

Colours were a little muted but a few tweaks of the settings and the picture had a warmer look.

Contrast was acceptable with decent black levels but it was light on detail in dark scenes.

Fast moving scenes and watching sports didn’t really showcase the TV’s screen despite being listed with a 100Hz refresh rate.

While watching Wimbledon the tennis ball became a long green smudge on the screen as it travelled back and forth over the net.

Viewers can also watch 3D movies – there are four pairs of glasses included.

Audio quality from the Soniq TV’s speakers was good not great. It was ample to enjoy TV everyday but was a little lacking when watching movies.

The Soniq 55-inch E55S14A borderless TV offers good value for those looking for a larger TV at a budget price.

At just $1,099 viewers get a lot of screen for their money and, while it may lack some of the high-end features that makes a TV expensive, it still offers a pleasant viewing experience and above average connectivity and control.