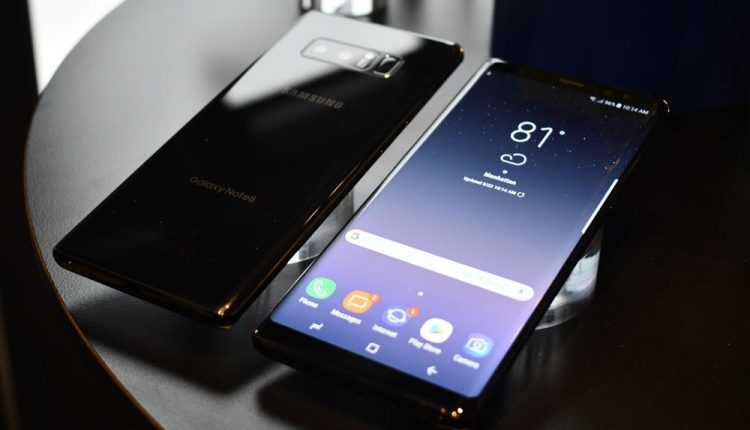 The Samsung Galaxy Note8 had a lot riding on it this year particularly since its predecessor – the Note7 – literally went up in flames a year ago. But the good news for the many fans of the Note brand is the Note8 has truly delivered.

The smartphone has a “go big or go home” feel to it with its large generous screen and long list of useful features.

It was important to Samsung that the Galaxy Note8 soldier on in the wake of the Note7 disaster.

At the device’s launch recently in New York, we heard from diehard users who were shattered that they had to give up their new Note7.

It highlighted the fact that there are many fans of the device who reluctantly returned the product.

It was classy to hear Samsung apologise to these users. The company felt like they let them down.

This was all the motivation Samsung needed to make the Note 8 its most powerful product ever. And it has succeeded with flying colours. 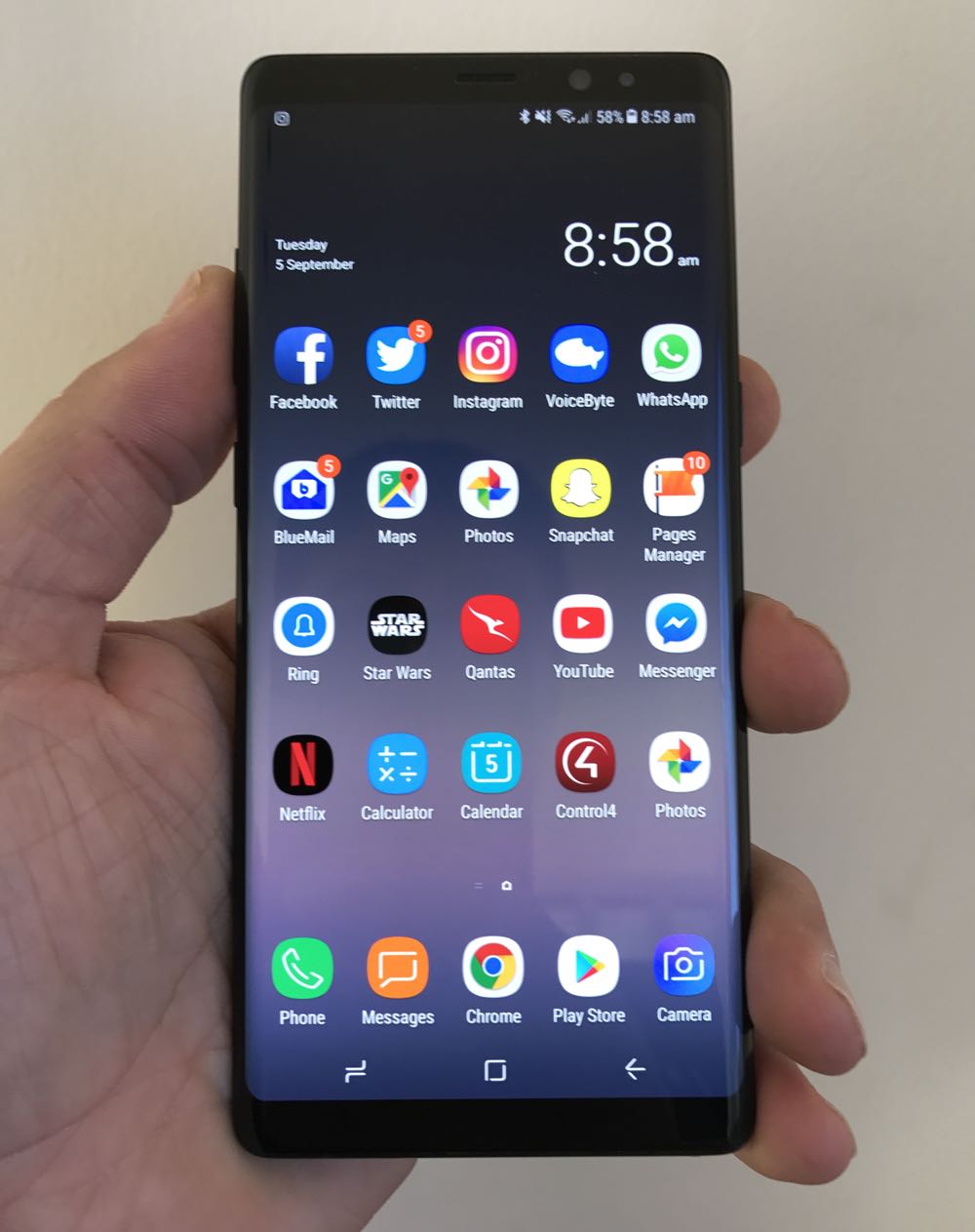 The look of the Samsung Galaxy Note8 draws most of its inspiration from its stablemate, the Galaxy S8.

You can see distinct similarities in the design including the Infinity Display in the same gently curved edges and corners so it can mould itself into your hand. 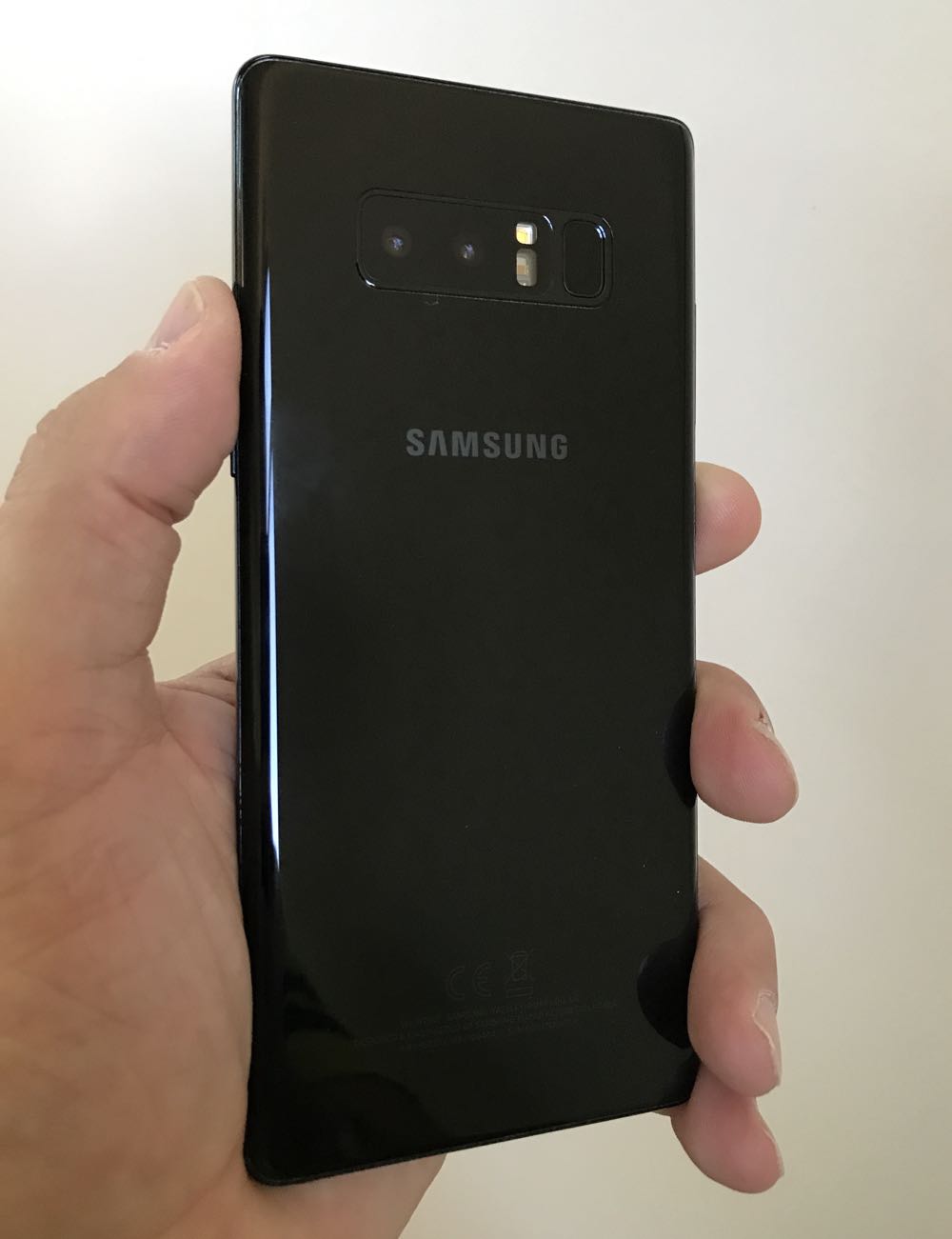 But the Note8 is a large device. It has a generous 6.3-inch Quad HD+ Super AMOLED display and is a lot of phone to handle.

If you prefer a smaller screen, then the Note8 might not be right for you.

But for those who want to live by Samsung’s marketing tagline – do bigger things – then the Note8 would be an ideal companion.

It is slightly taller and wider than the Galaxy S8+ and has the same 18:9 aspect ratio to allow the screen to take over nearly the entire front of the device. 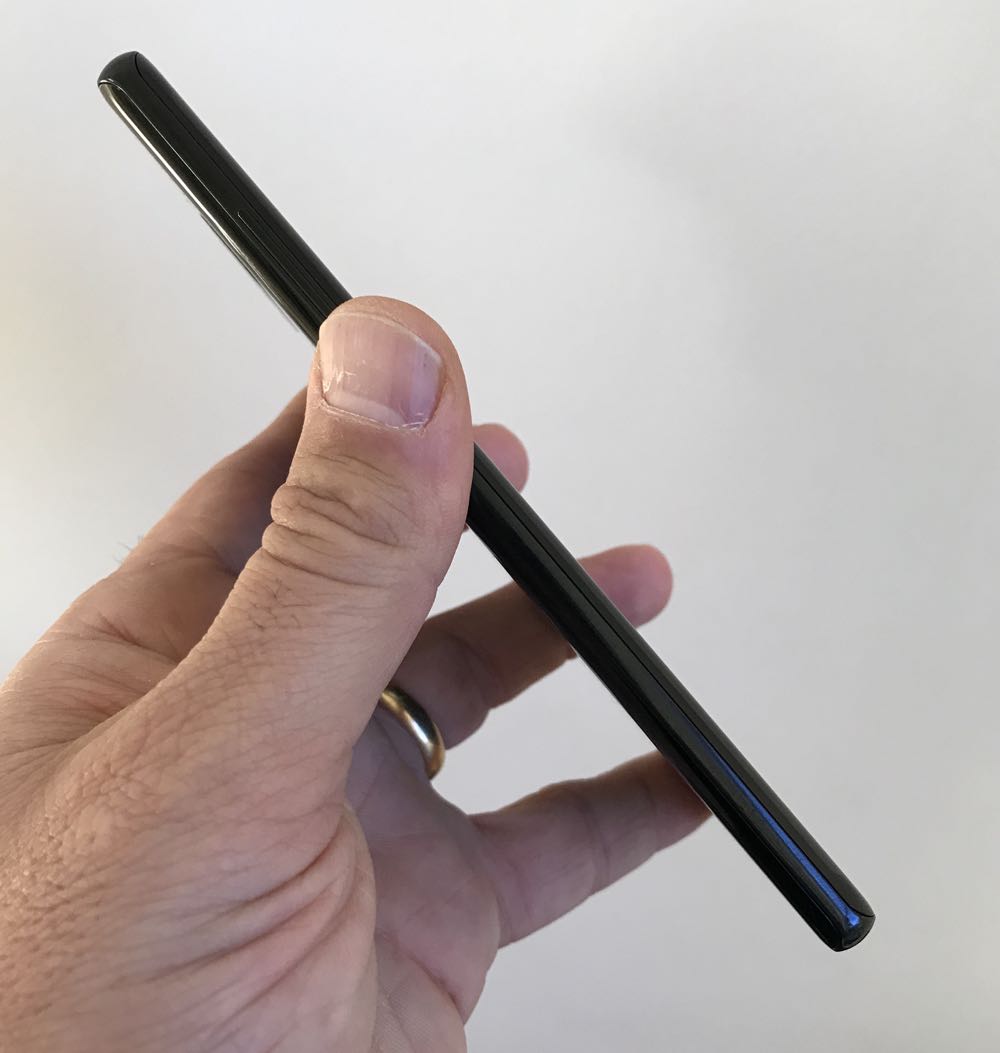 Apart from being larger, it also has squarer corners to distinguish it from just being an oversized Galaxy S8.

That larger screen also gives you more room to move with the S Pen which fits securely into the bottom edge of the device when you’re not using it.

The Note8 also has an IP68 water and dust resistance rating.

The Samsung Galaxy Note8 has a beautiful big Infinity Display that can support Mobile HDR content and provide an edgeless viewing experience with a resolution of 2960 x 1440.

A screen of this size not only gives the user enough space to write, work on documents and use their apps – it’s also large enough to enjoy video content in high quality anywhere.

The screen can also be put to use for multitasking thanks to the ability to run two apps side-by-side and even launch them together with the new App Pair feature. 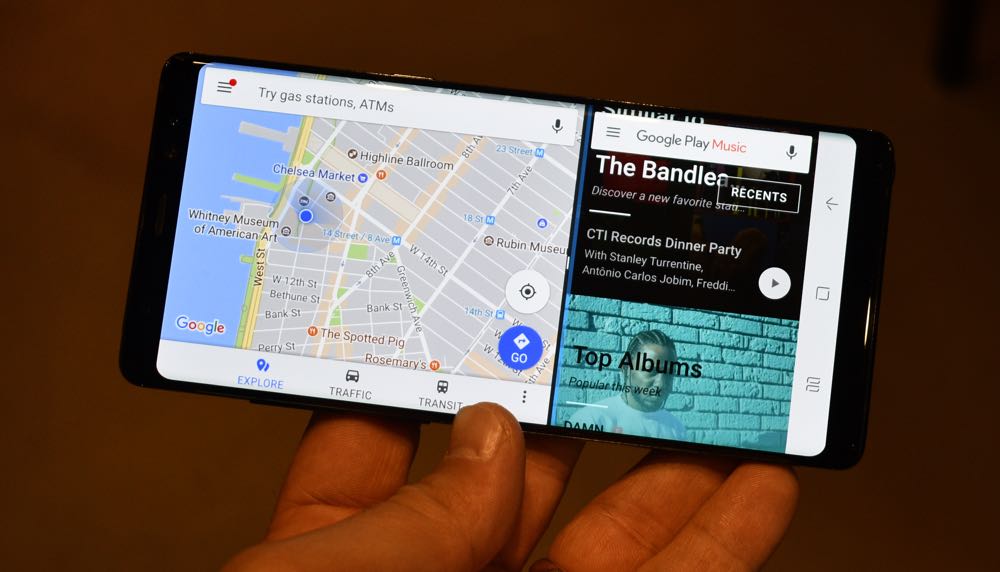 For example, you could launch Google Maps and your music streaming app simultaneously when you get behind the wheel of your car. It saves time and effort and is a standout feature.

And for those worried that the screen will be too much to handle and are scared they may break it, Samsung has introduced the Screen Assure program which will give customers one free screen repair in the first 12 months if the device is purchased before October 31, 2017.

The only complaint we had with the screen was how easy it was to accidentally activate or move an app when we gripped the phone and made contact with the edges of the Infinity Display. 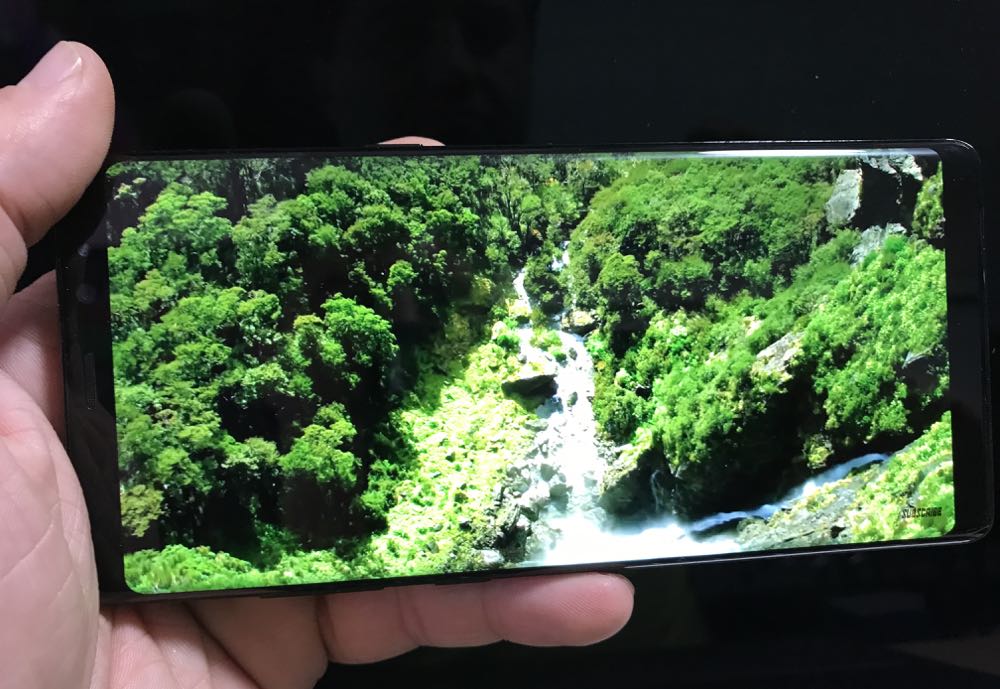 It takes some time to get used to gripping the Note8 without causing an on-screen reaction.

But this isn’t a deal breaker by any means – there is simply a right way and a wrong way of holding the phone and it didn’t take long to learn the right way.

Part of the Note8’s DNA is the S Pen. It’s what makes the Note the Note.

This latest S Pen has a pen tip diameter of 0.7mm which can detect 4,096 levels of pressure. It’s a precision instrument for anyone who wants to write, draw or paint.

Writing or drawing on the screen is more fluent than ever before and responsive enough to think you’re holding a real pen writing on a real piece of paper. 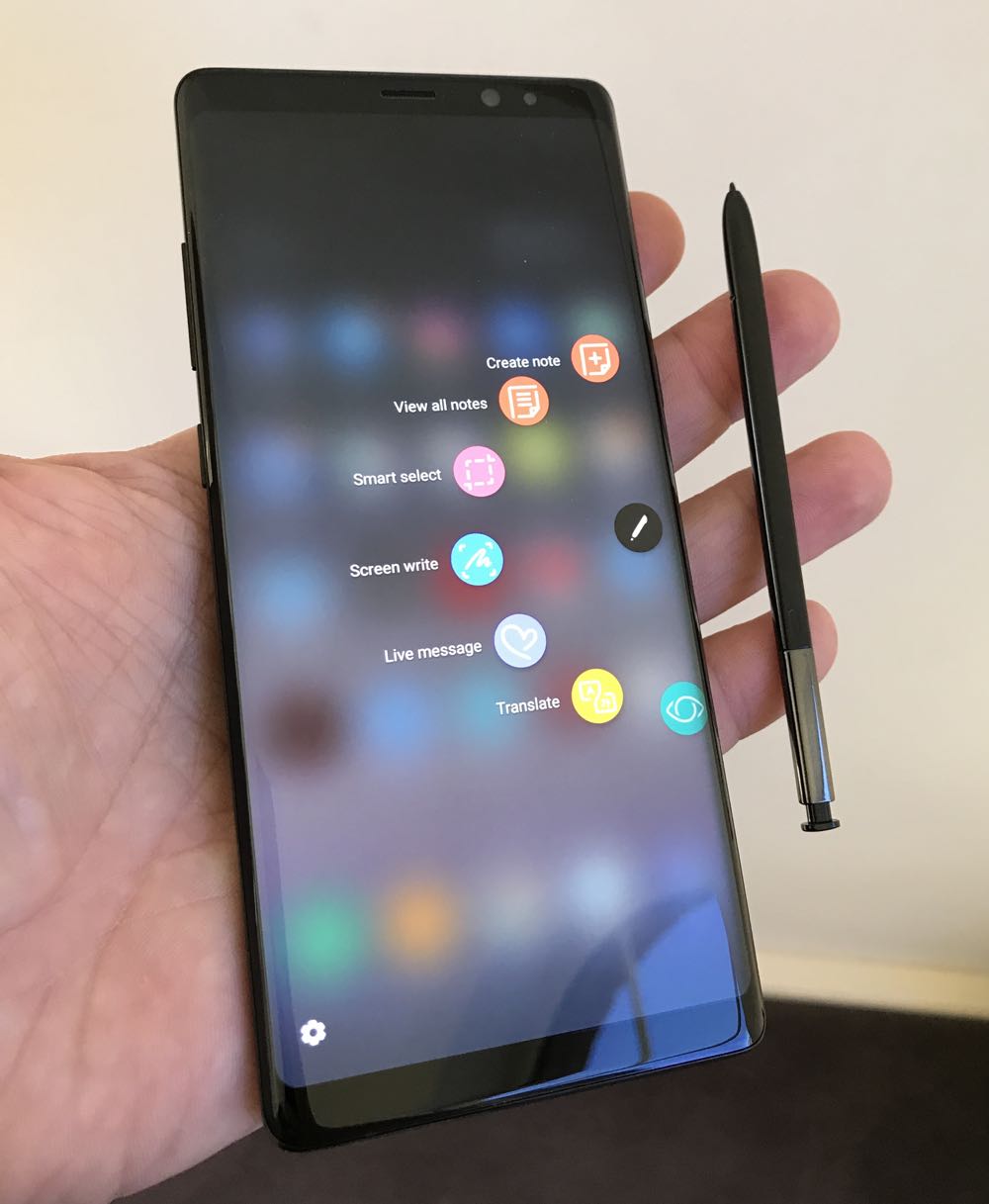 The Lock Screen memo feature is one of our favourites because it allows users to start writing on the screen while the device is locked so you can jot down that to-do list, shopping list or any other idea that you need to write down.

You can also pin that memo to the home screen so you can be constantly reminded about it. 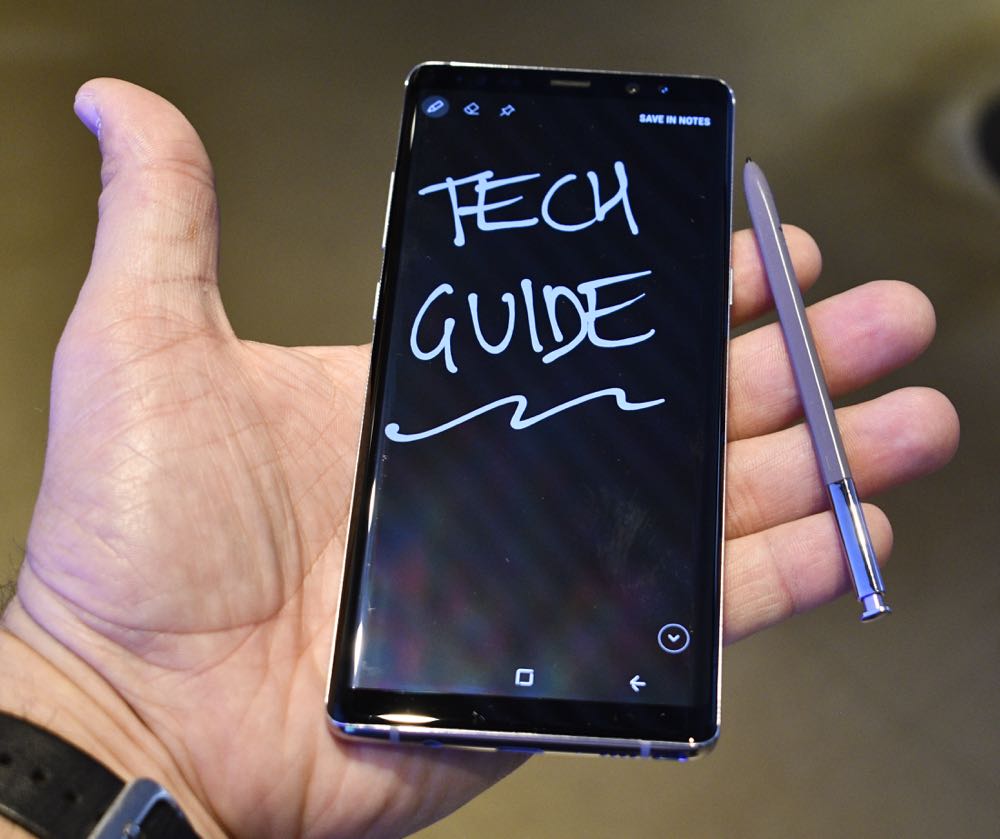 And the S Pen can not only write, it can also translate up to 71 languages.

You simply open the camera, find the sentence you want to translate and hover the S Pen above it and it will appear in the language of your choosing. 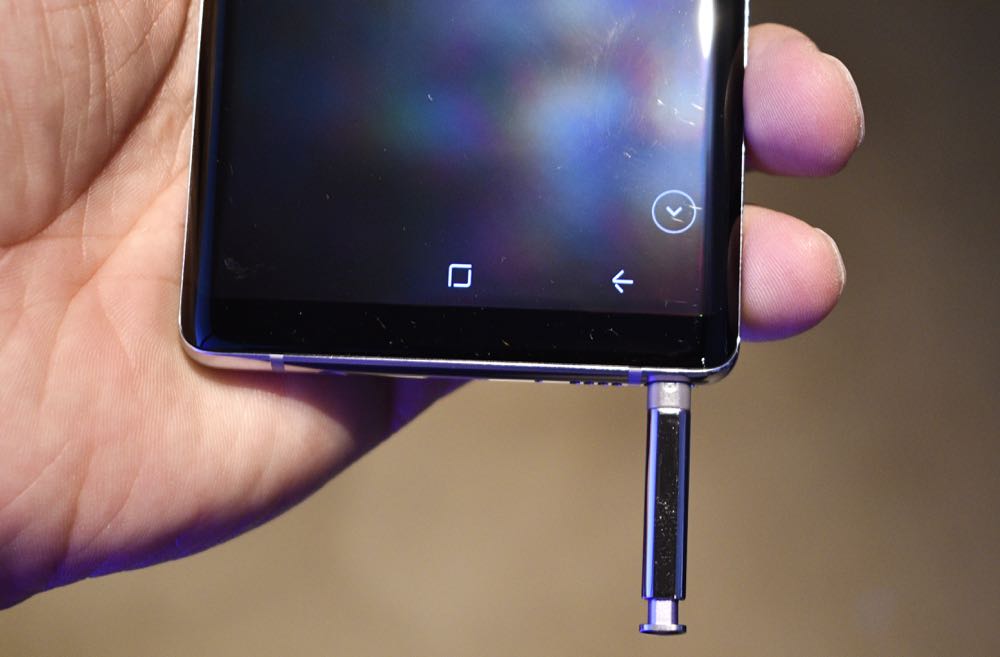 It will even convert currency amounts and units of measurement.

Another fun feature you can enjoy with the S Pen is Live Messaging which allows users to write, draw and annotate photographs that can be converted into GIFs and shared with anyone. 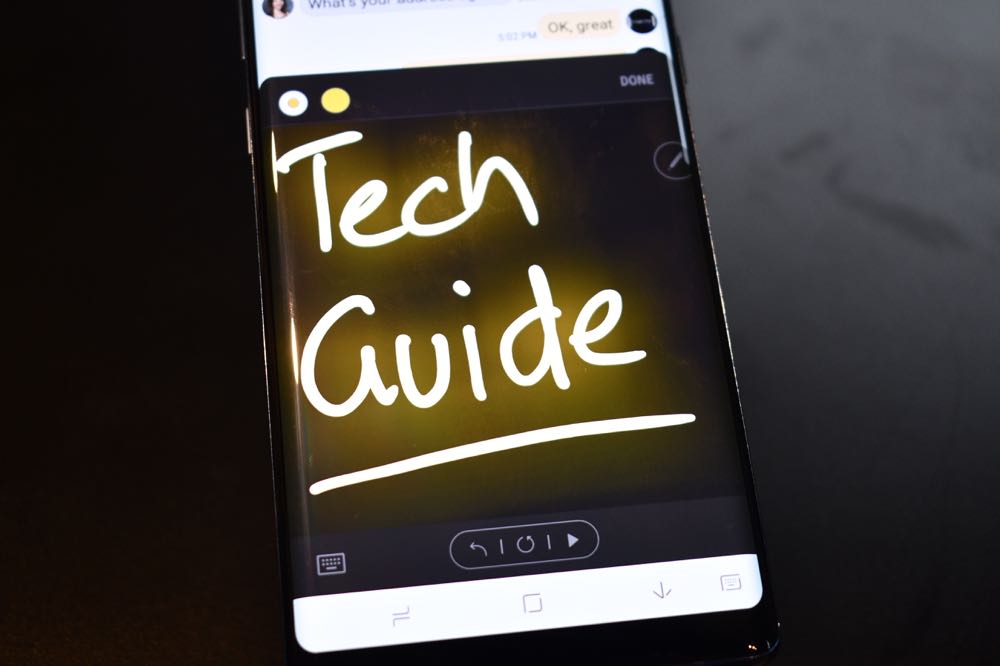 The Note8 benefits from having two lenses – a first for a Samsung mobile device.

One lens is telephoto and the other a wide-angle and there is optical image stabilisation for both.

The resolution for both is 12-megapixel with 2X optical zoom and up to 10X digital zoom. 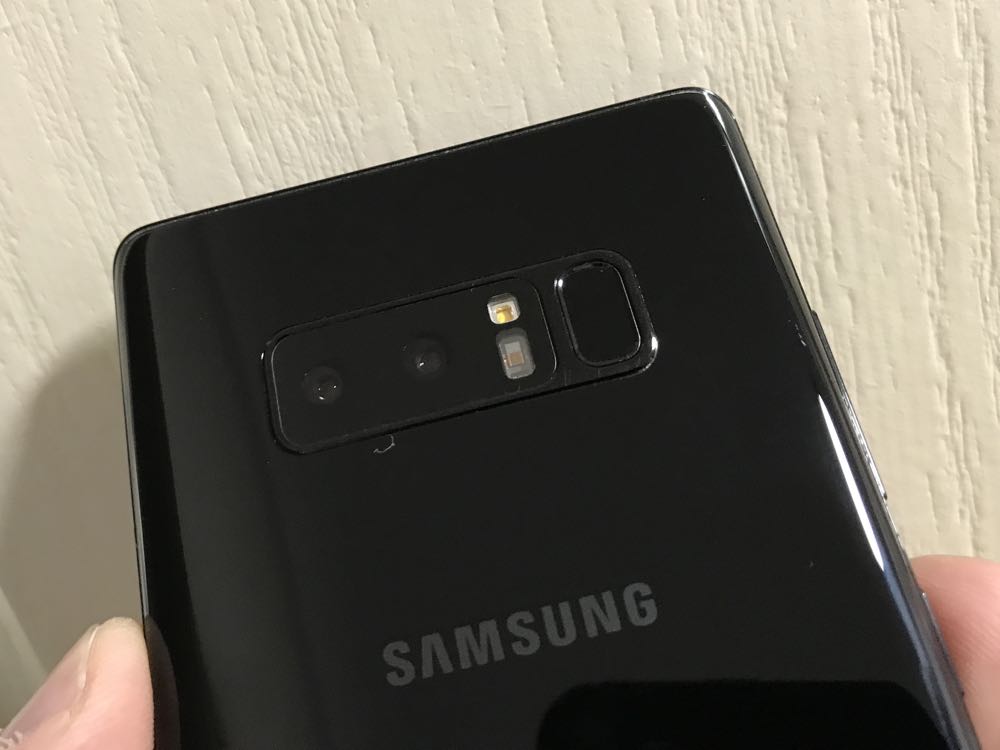 Having two lenses allows users to create excellent depth of field shots with the subject in focus in the foreground and a blurred background.

The Note8 takes that even further with its Live Focus mode that makes it possible to adjust the amount of blue you want to apply to the background. 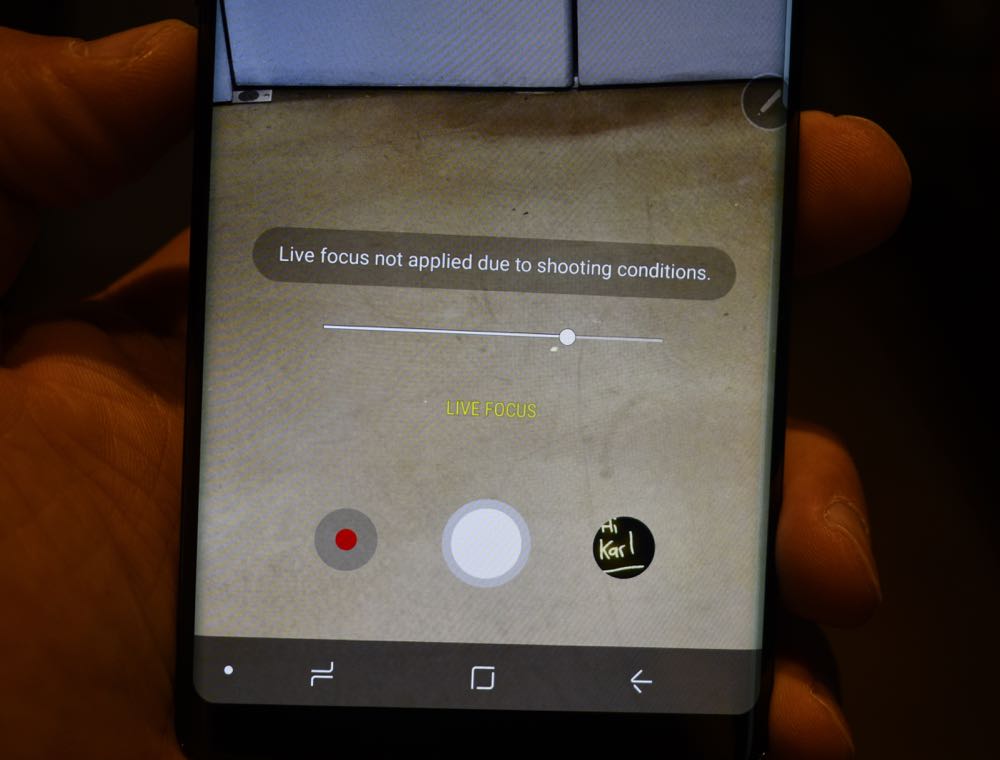 Another feature is Dual Capture mode which engages both cameras at the same time – one takes a photo with the telephoto lens while the other provides a wide shot so you’re not missing out on anything.

Photos taken with the Galaxy Note8 were sharp and bursting with colours. 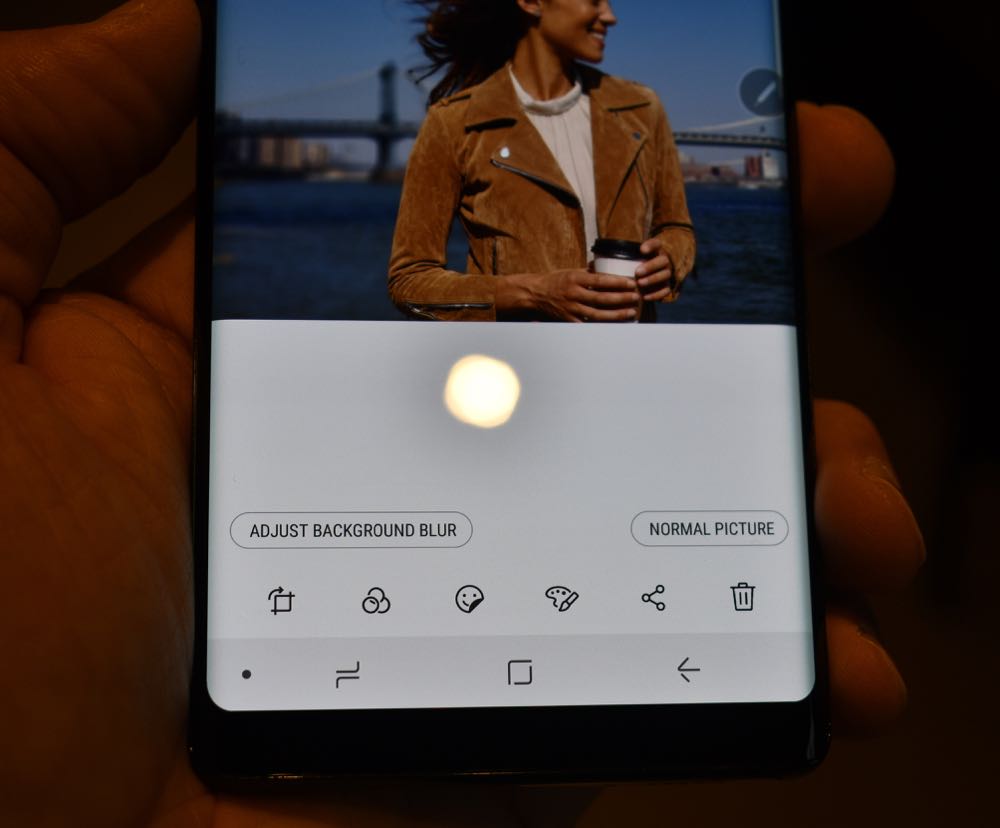 The phone’s Super AMOLED display does tend to flatter the Note8’s images so that every photo is saturated with colour.

Take the image off the device and it still holds its impressive quality but the colours are slightly more subdued.

The Samsung Galaxy Note8 is an absolute powerhouse when it comes to performance.

Under the hood are two 2.3 GHz 64-bit octa-cores inside a 10nm processor along with 6GB RAM and a microSD card slot to increase storage by up to 256GB. 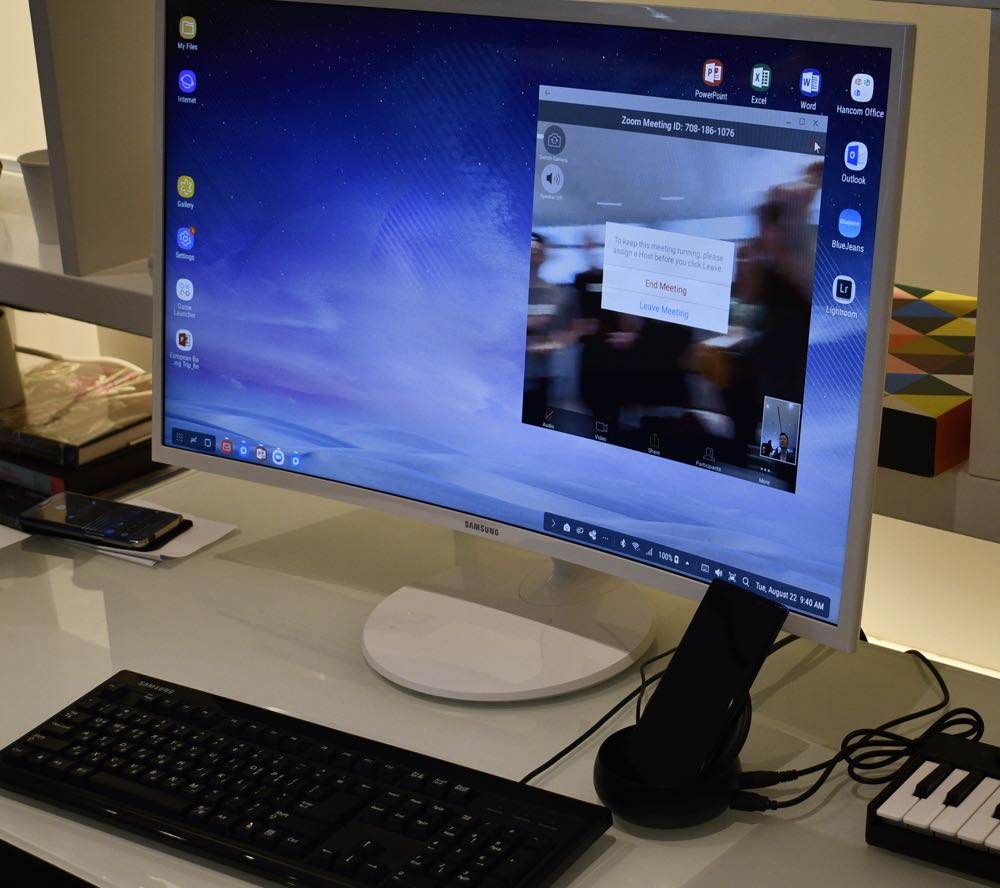 If there is one way of demonstrating the power of the Galaxy Note8 it’s the Samsung DEX.

DEX was introduced with the Galaxy S8 and allows users to dock the device and create a desktop computer experience.

The Note8 will work with the same Samsung DEX dock to provide an even more powerful connected experience. 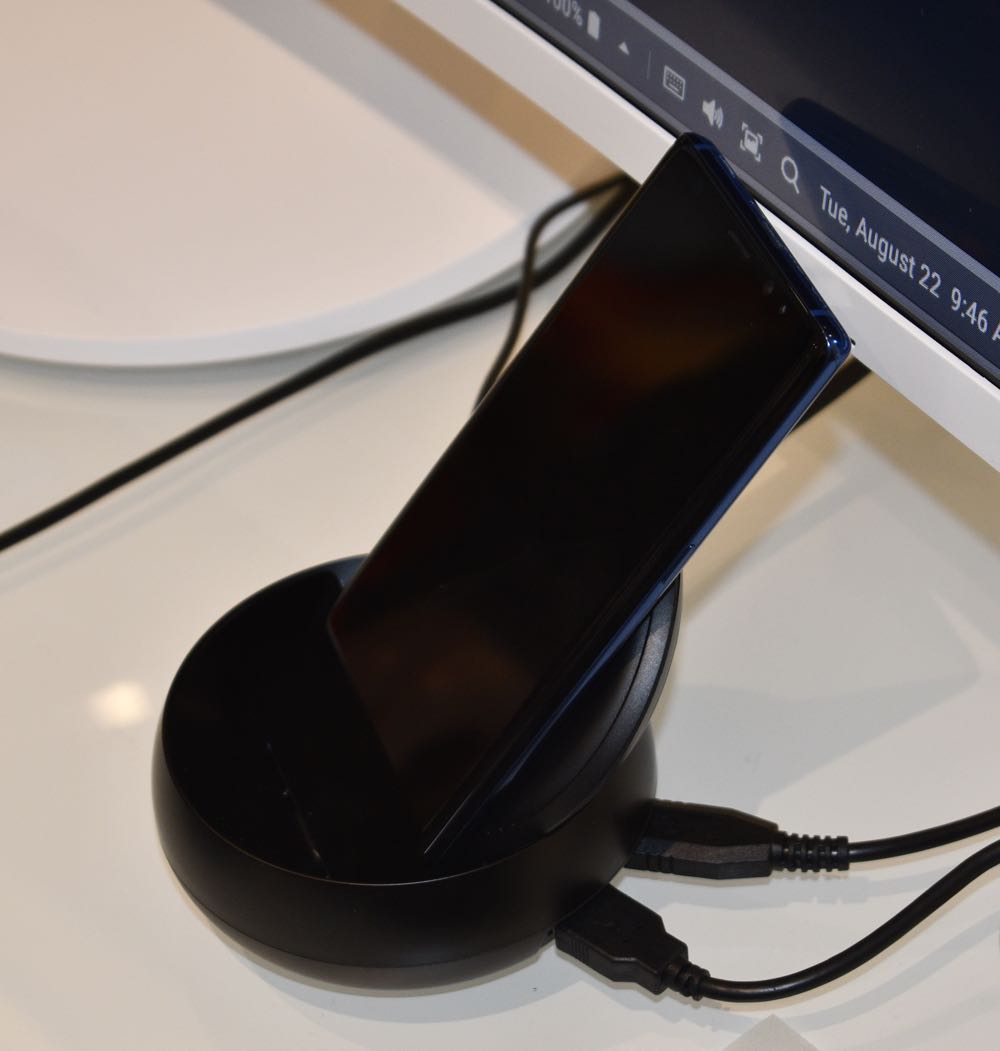 Users can access their email on a clean interface and be able to run several applications at the same time including YouTube, Word, PowerPoint and a browser.

You can run games full-screen on a connected monitor and you’d be forgiven for thinking they were running off a dedicated gaming PC.

It’s all the more impressive when you remember it’s running off the Note8. 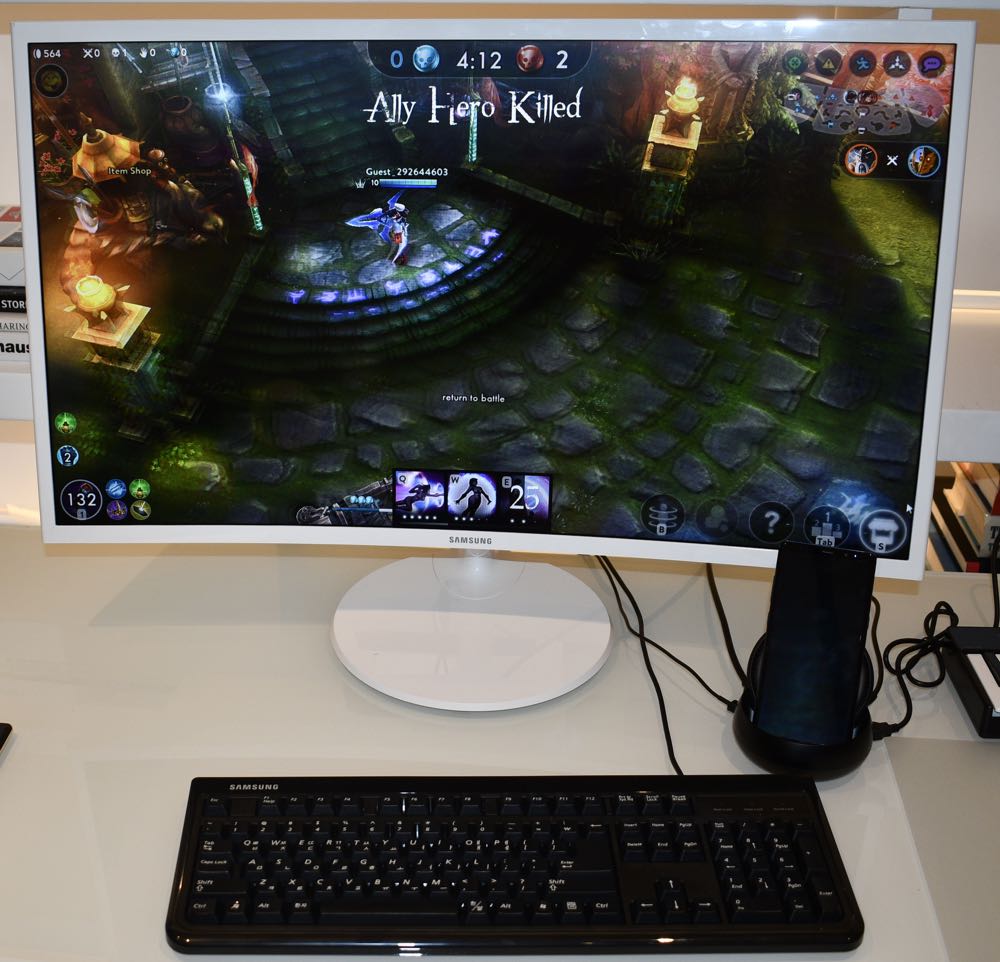 And when you’re done, you simply remove the device from the dock and move on without leaving any traces of your documents and data because all contained on the phone.

This feature alone should be reason enough for a high-end mobile user to seriously entertain the thought of making the Note8 their next smartphone.

On the security side, you’ve got a few ways of unlocking the device including iris scanning, facial recognition, fingerprint and a pass code.

The iris scanning and facial recognition is almost instant and an easy way to unlock the phone just by looking at it.

The fingerprint reader is located on the rear of the phone on the right-hand side beside the camera’s flash. 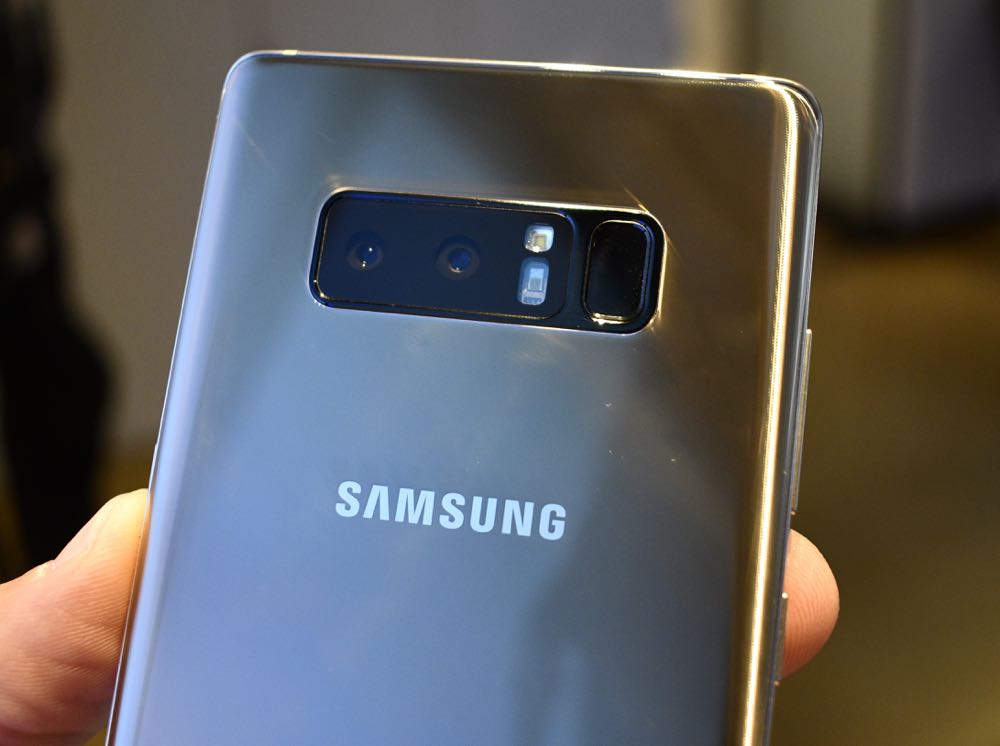 It would have been nice for Samsung to centre the fingerprint reader to make it easier to unlock it with both your left and right hand.

The Samsung Galaxy Note8 battery has a capacity of 3,300mAh which, when combined with the device’s smart battery management system, will easily power you through an entire day and well into the night.

The battery is a sensitive issue for Samsung considering it was the centre of the Note7’s woes so it wasn’t going to risk a battery with an even higher capacity.

The Samsung Galaxy Note8 is a remarkable phone with a big screen, big capabilities and big features and suitable for the power user who wants to work hard, play hard and enjoy content in its highest quality anywhere. It will certainly make the issues with the Note7 seem like a distant memory.

VERDICT: The Samsung Galaxy Note8 is a remarkable phone with a big screen, big capabilities and big features and suitable for the power user who wants to work hard, play hard and enjoy content in its highest quality anywhere. It will certainly make the issues with the Note7 seem like a distant memory.