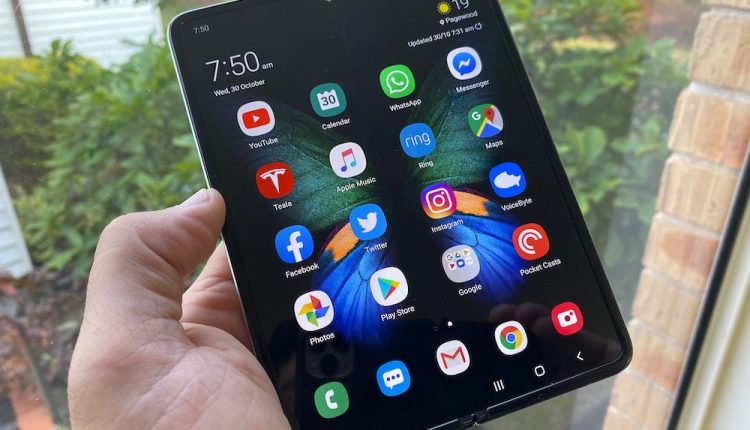 The Samsung Galaxy Fold heralds a new and exciting era in smartphones. The device is brilliantly executed and provides an incredible experience on the move. It's expensive and it's not for everyone but for power users and anyone who enjoys a lot of content on the go it will be extremely attractive.

The Samsung Galaxy Fold is a really impressive product. It’s the first foldable smartphone to hit the market at everyone we showed it to was absolutely amazed.

But there is a difference between taking a casual look and actually taking it on as your new mobile device.

Tech Guide spend a few days using the Samsung Galaxy Fold as our daily driver and thoroughly enjoyed the experience.

Yes we did love impressing people when we showed it to them – it was doing a little magic trick every time we opened up the device to reveal the larger 7.3-inch screen on the inside.

It was also great knowing we have this large canvas at our disposal to view our apps, websites and content on a grander scale.

And it also helped us to multitask – you can actually run three different apps at the same time on the large internal display.

Taking on a device like this though does takes some getting used to.

You kind of have to change a habit we’ve had for more than a decade which is only having one screen.

The Samsung Galaxy Fold has ushered a whole new wave of smartphones and how we use them.

The Samsung Galaxy Fold has a tremendous build quality and feels really sturdy in your hand.

We expected the device to be chunkier than it actually is. 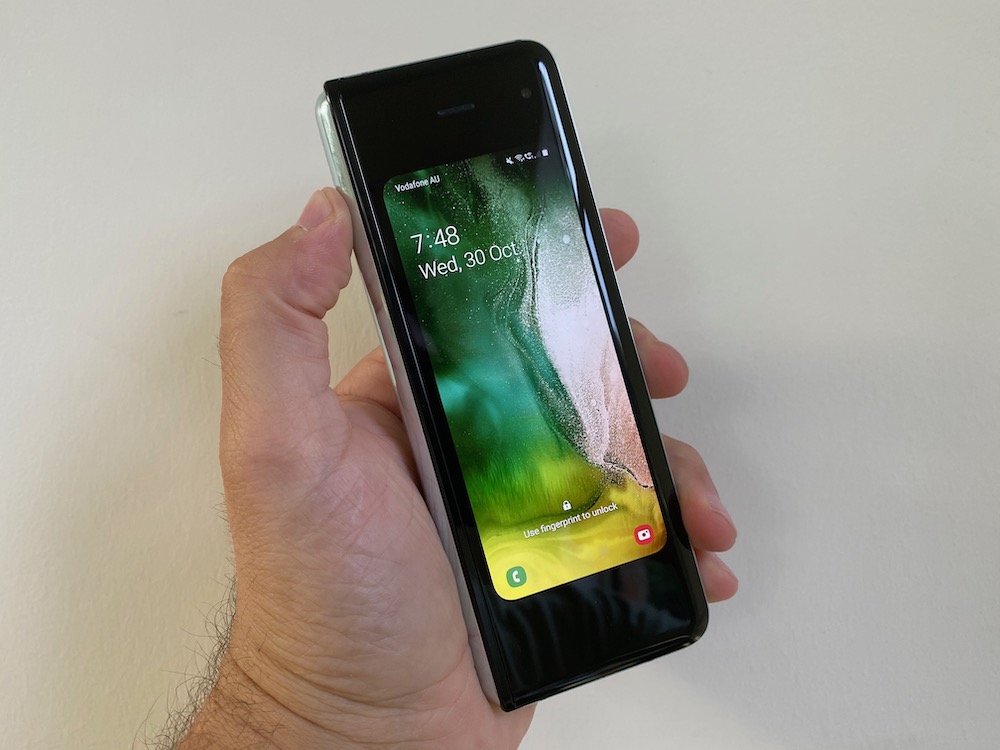 Despite it being 1.7cm at the hinge and 1.3cm at the edge (so it’s like a wedge shape) we didn’t consider the size to be cumbersome at all.

It was no more cumbersome than a regular smartphone. 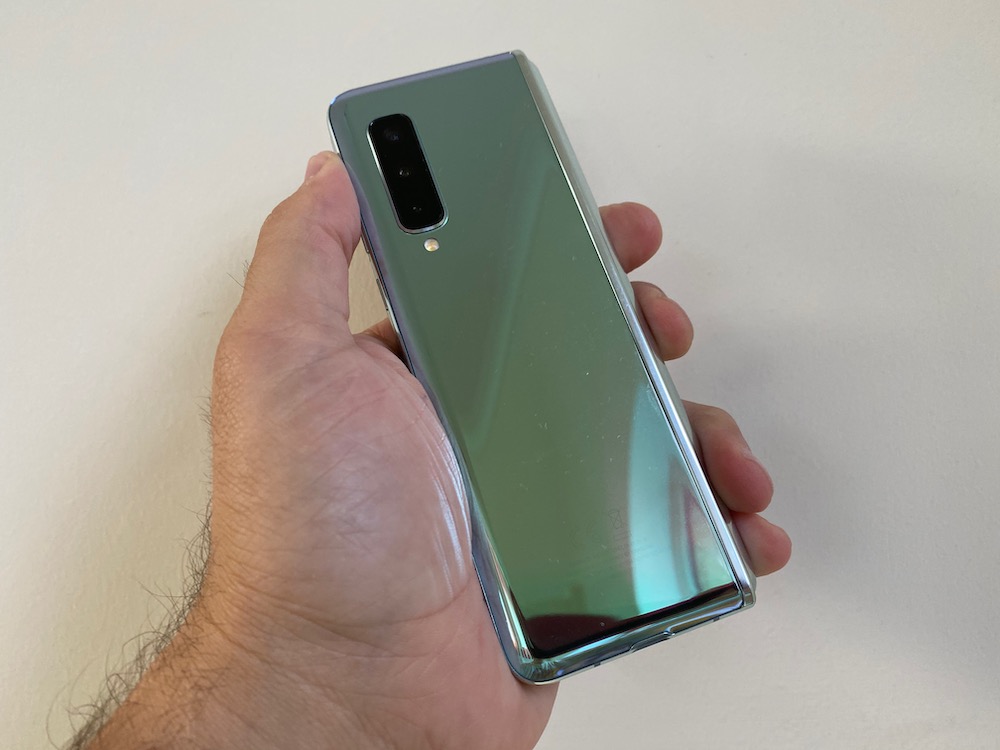 Yes it’s slightly thicker but the Samsung Galaxy Fold is also much narrower than your regular device.

The engineering kudos has to go to the hinge. 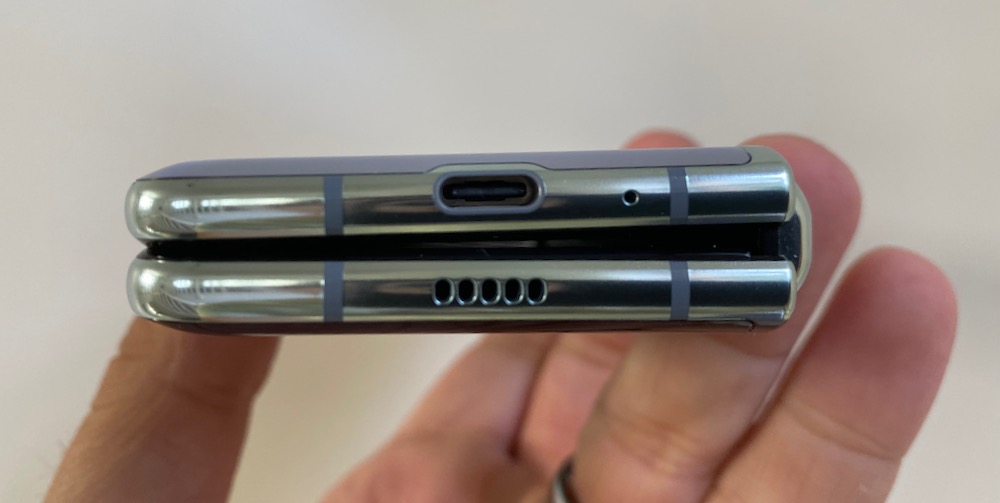 This is the secret sauce behind the device and what makes the foldable screen possible.

This hinge has to manage several layers that make up the flexible polymer screen when folded and unfolded and do it accurately every single time.

On the front is a 4.6-inch display which is handy for checking your notifications, making and receiving calls and doing those casual tasks that you would carry out on a regular device. 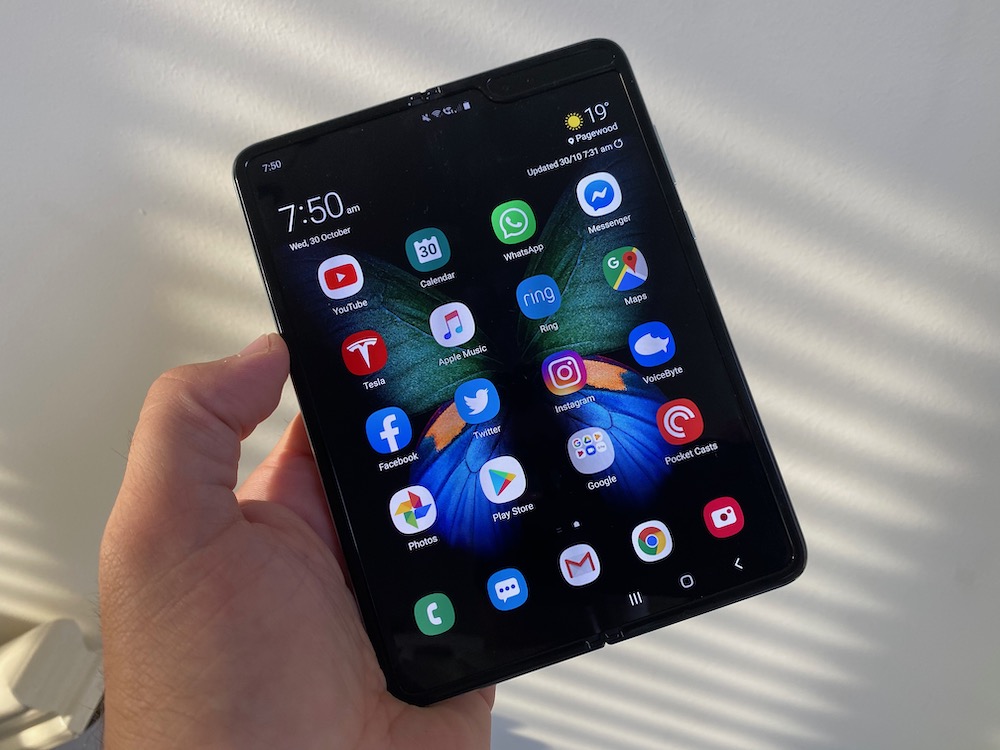 It’s a shame that front screen isn’t a little larger.

We’re so used to having phones displays that are 6-inch and larger.

When you’re using the device one-handed it doesn’t give you a lot of room to move.

And even trying to type on that front screen is rather difficult because the keyboard is quite small.

Yes, there’s that larger tablet-size 7.3-inch display inside but it’s not always possible to access it.

You can’t open the device one-handed – the hinge is just too strong so while the front display is adequate, it would have been nice to have an extra inch to play with. 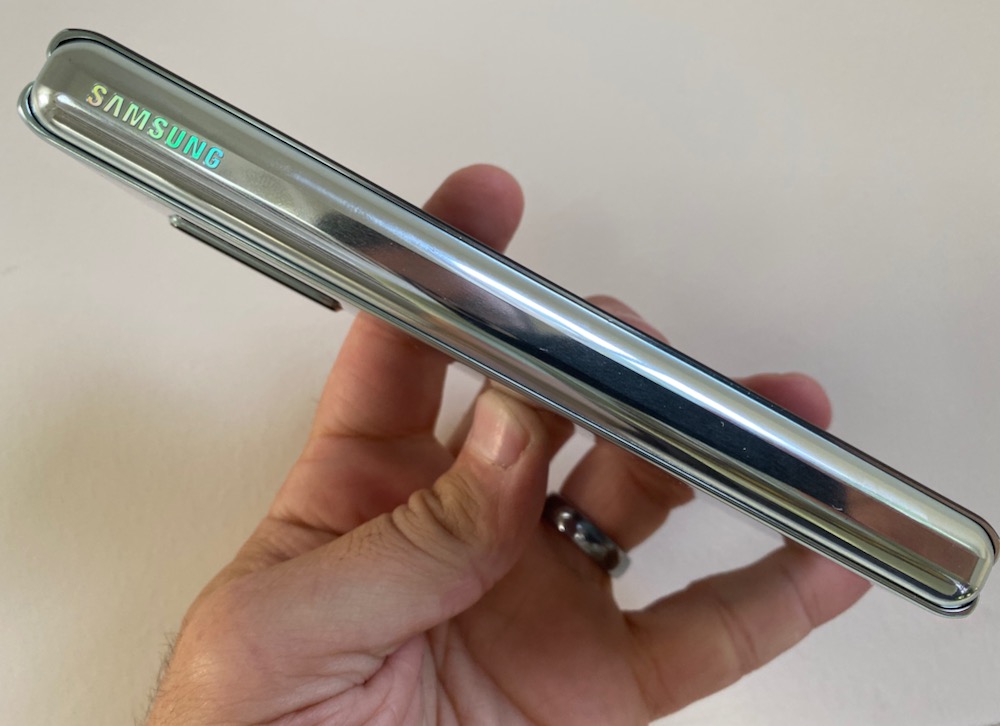 And it looks gorgeous. It has the same brightness, sharpness and colour accuracy as a regular smartphone display so your photos, movies, websites, apps and games look incredible.

On the back of the Samsung Galaxy Fold is a triple camera system. There also a front camera as well is dual cameras in the top right corner of the internal screen.

Under the hood is a next-generation AP chipset and a massive 12GB RAM so the device hums along with the speed and performance of a computer.

That performance comes in handy when viewing content but also when running several apps at the same time. 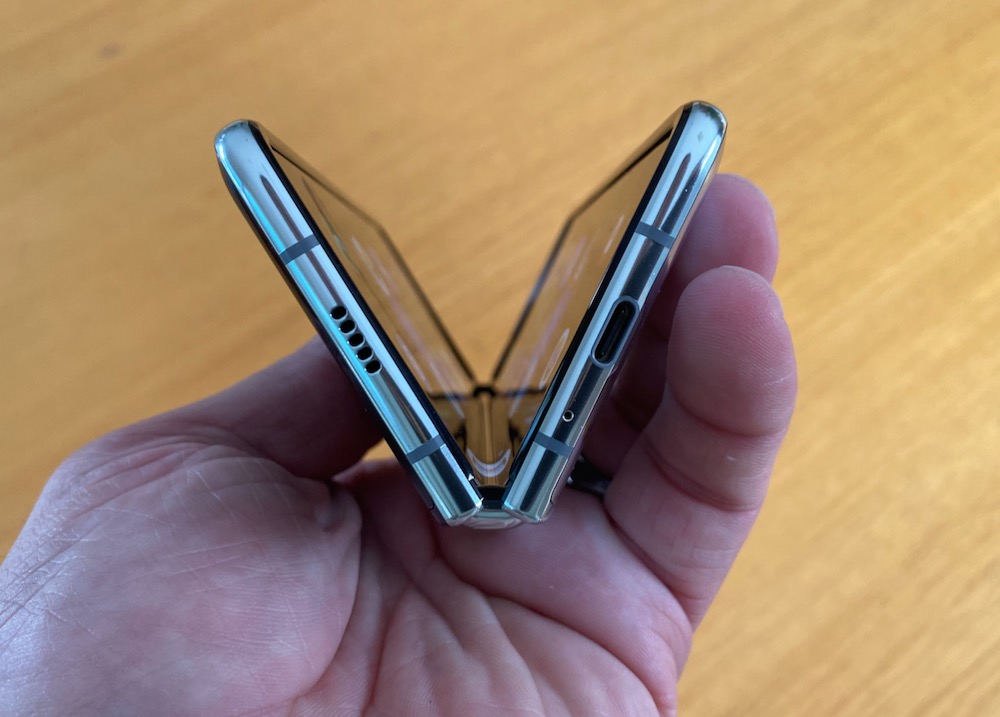 There is also 512GB of memory on board but unfortunately that memory cannot be expanded with a microSD card.

On the security side, there is a fingerprint reader on the edge of the Galaxy Fold as well as the option of using face recognition.

For our review we used the Smart Lock feature that kept the device unlocked when it was connected to a trusted device like the Galaxy Watch and our Tesla Model S.

So who is the Samsung Galaxy Fold designed for?
Straight up, they need to be cashed up – it does cost $2999 after all.

But money aside, the ideal user would be a mobile professional, a content creator and a content consumer. 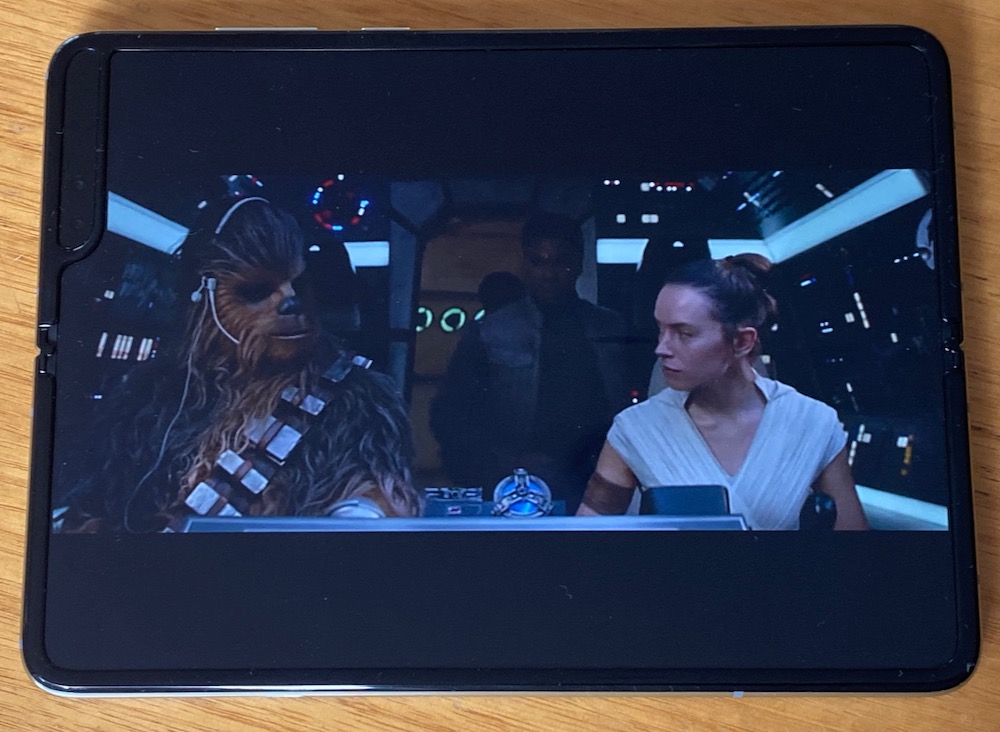 For the mobile professional, the Samsung Galaxy Fold is an excellent multitasking device.

The large 7.3 inch screen can be split to run three apps at the same time.

You may have email in one section, your browser in another and a calendar in the third section. 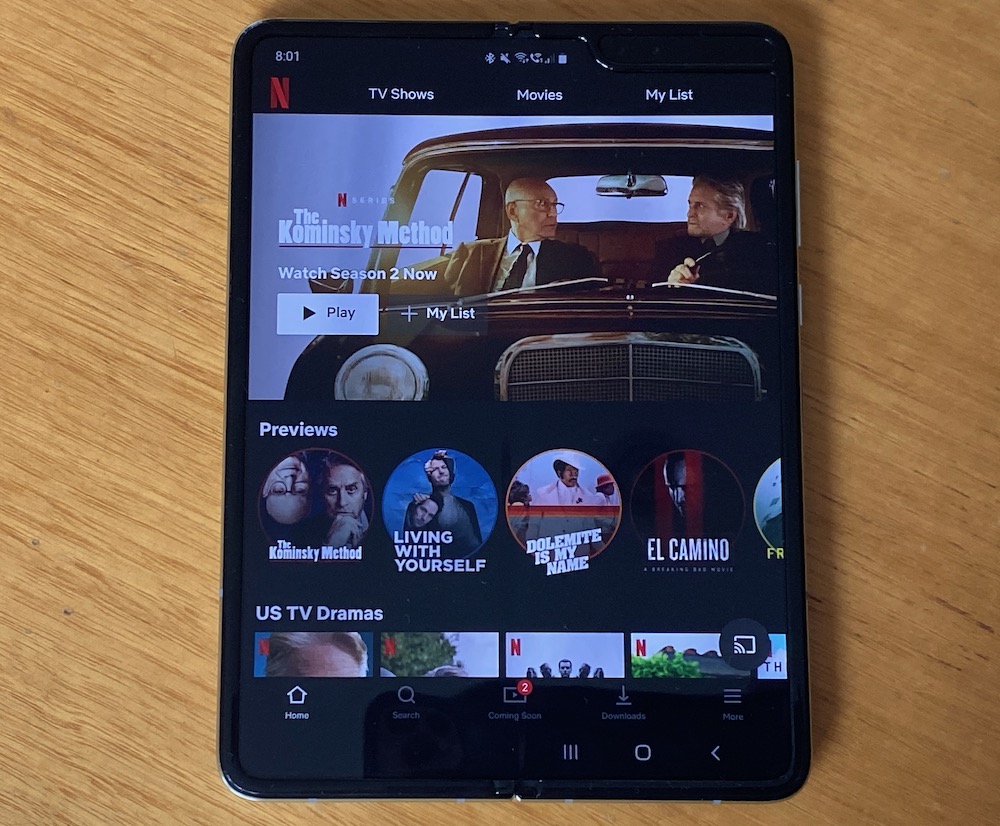 Users simply swipe in from the right side to introduce the apps you would like to use at the same time.

And it’s easy to resize the windows and actually drag-and-drop apps to different positions on the screen.

But that large canvas is just perfect for enjoying your content.

The device sounds good as well thanks to the onboard stereo speakers tuned by AKG which are also capable of Dolby Atmos.

Included in the box are a pair of wire-free Galaxy Buds as well. 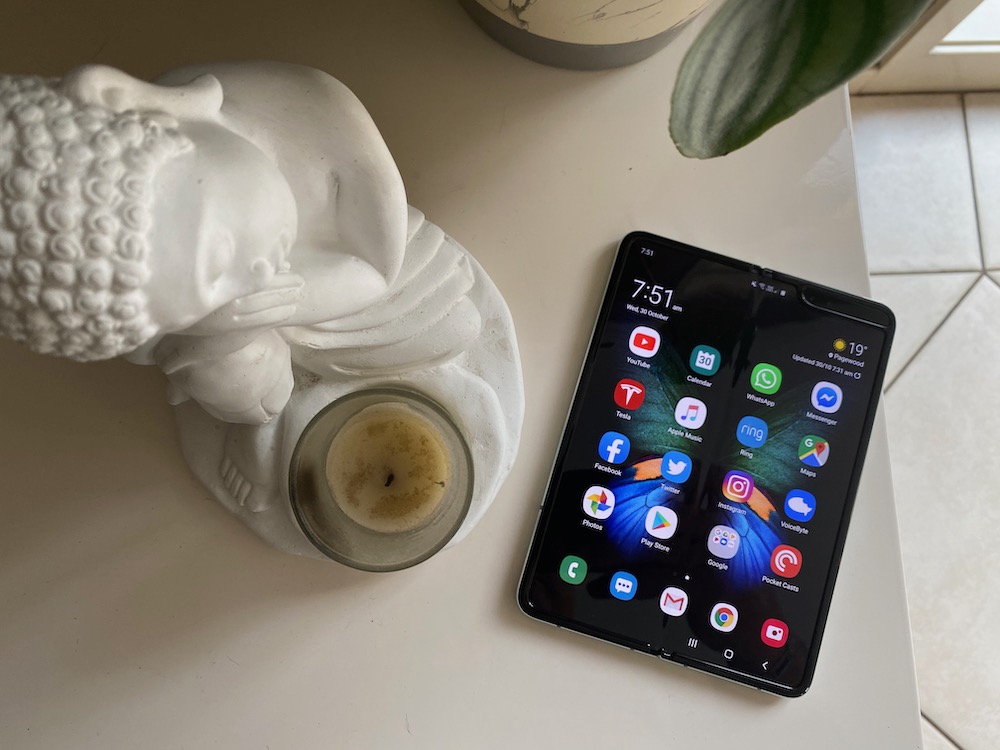 If consuming content on the move is something you do quite often the Galaxy Fold has got your back and is perfect for watching YouTube, Netflix and Stan anywhere you like.

Even browsing the web is an all-new and more enjoyable experience with the Galaxy Fold.

Sites render as they would on a tablet or a laptop to make them much easier to read.

So here you have a situation where instead of carrying two devices all you need is one.

It can be used as a mobile device and then transform instantly into a tablet.

If you’re a commuter or about to board a long flight the Samsung Galaxy Fold is the device that can meet all your needs.

Most apps look impressive and are easier to use when viewed on a larger scale like games, maps, your gallery and reading apps.

The larger screen makes them all much more enjoyable to use. 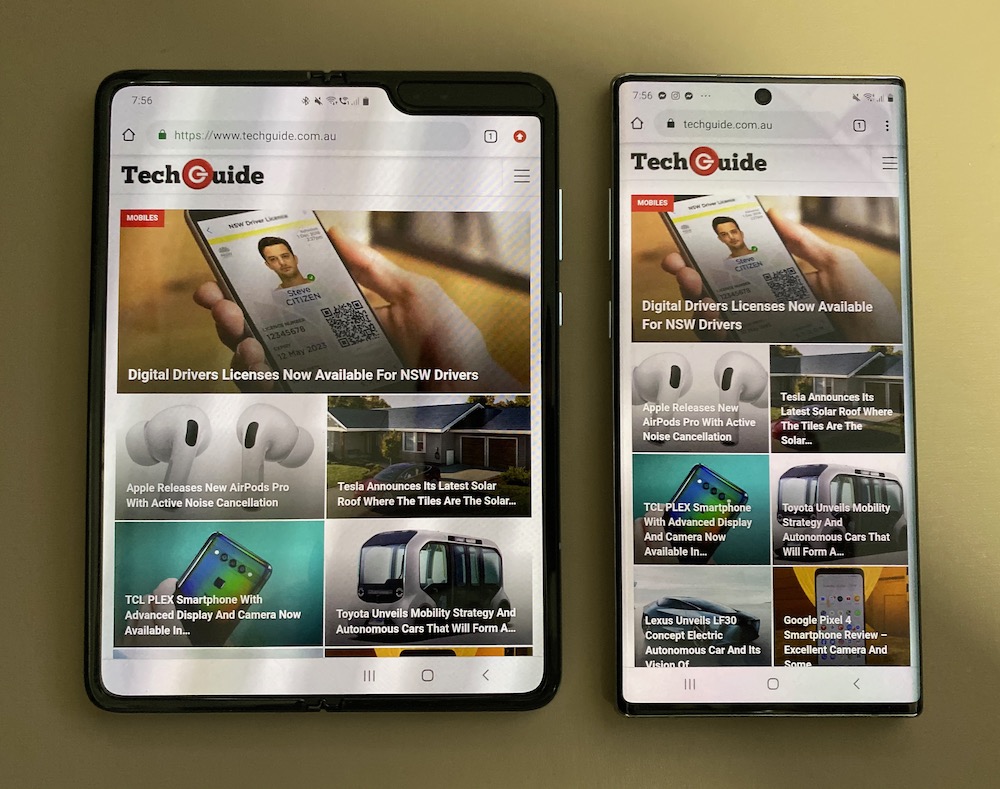 One cool feature is Continuity which means that whatever app you happen to be using on either screen will transfer to the other when you fold or unfold the device.

For example, you may be viewing a map on the small front display and when you unfold the device you will find it is precisely where you left off.

With a 4.2:3 aspect ratio, the Galaxy Fold’s larger screen is more like a square. 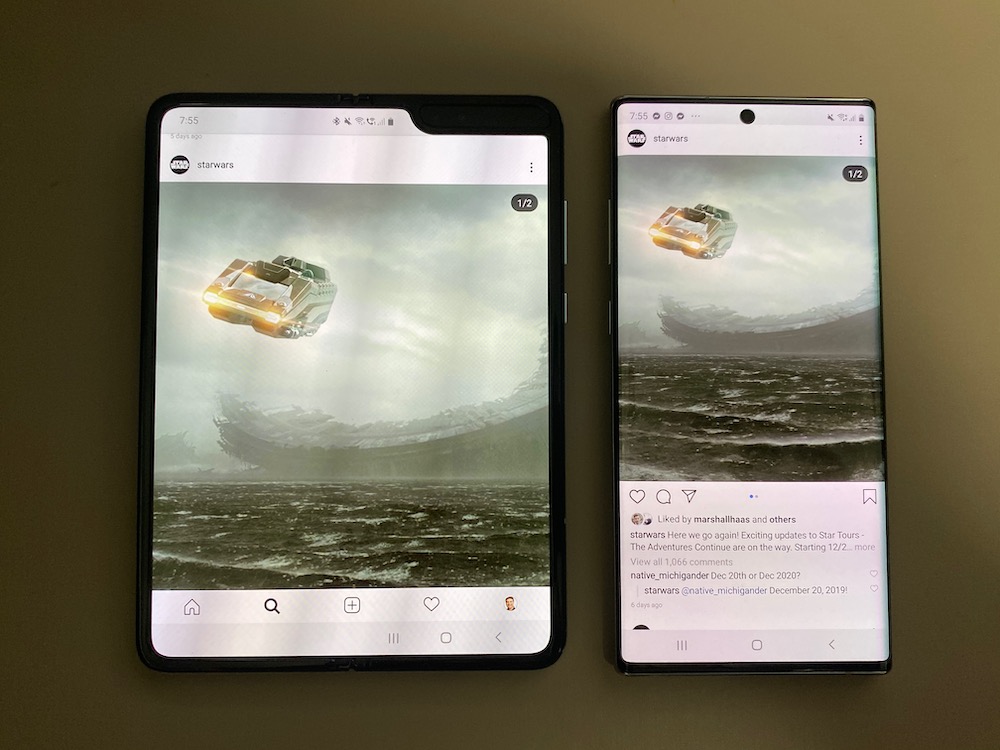 So while the Galaxy Fold excels when it comes to playing video, viewing images, playing games and studying maps – some apps actually work better on the smaller front screen or on a regular smartphone.

To get the same look and feel to these apps own the Galaxy Fold you need to divide the screen – but then you’re looking at that content in a smaller scale than you would on a regular smartphone. 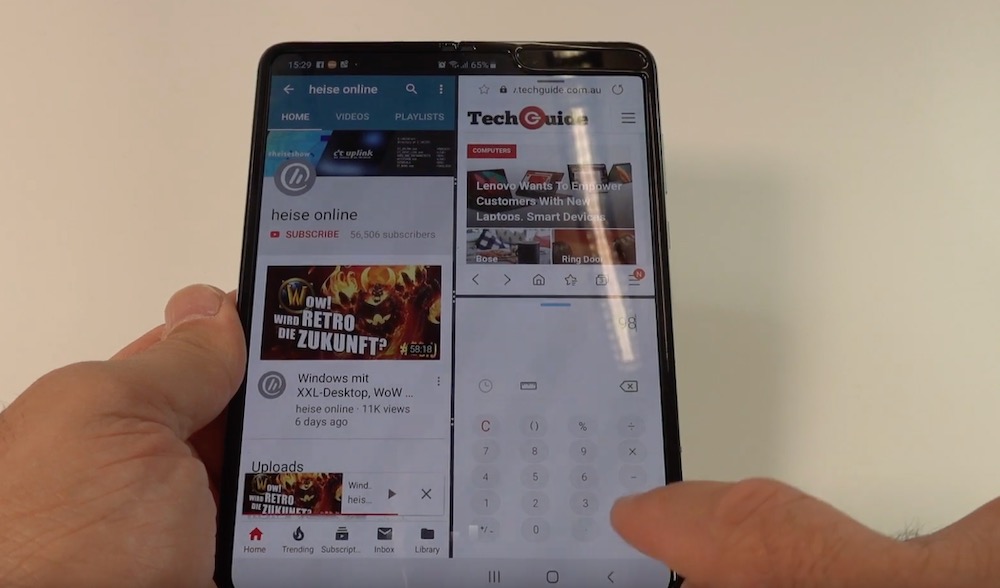 The camera onboard the Samsung Galaxy Fold is exceptional – similar to the system you’ll find on the Galaxy S10 – and includes a 16-megapixel ultrawide, 12-megapixel wide-angle and 12-megapixel telephoto on the rear panel.

And having that massive 7.3-inch display is plenty of room for a viewfinder.

The dual front cameras can also be used to take Live Focus shots which lets you control the background were an add an artistic look to your photos.

OK, here’s what we didn’t like about the Samsung Galaxy Fold.

With this huge inside screen, we were disappointed that Samsung still had to include a notch for the internal cameras.

It would have been nice for the cameras to be integrated into the bezel to give the screen an uninterrupted shape. 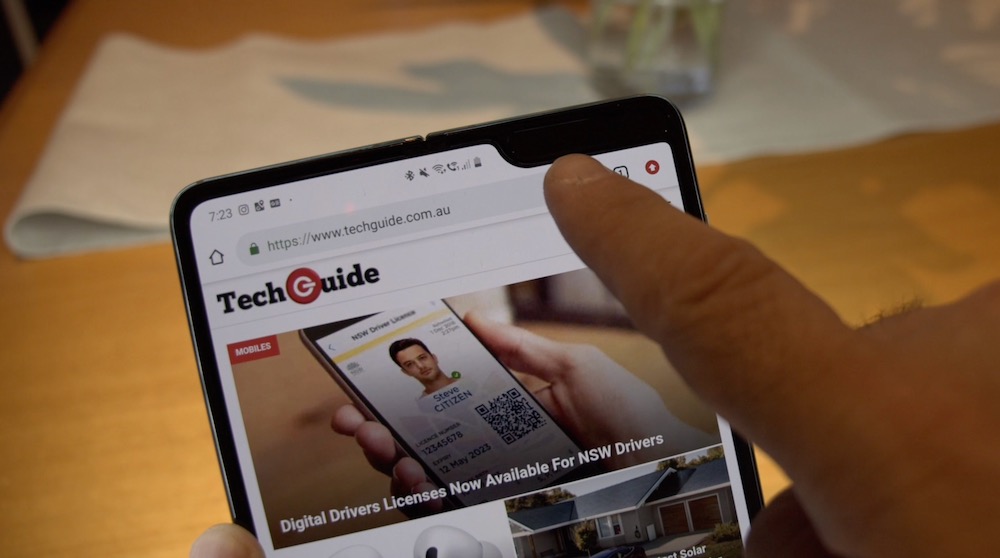 It doesn’t intrude too much when using apps and browsing the web but it is noticeable when viewing movies and looking at your images.

We’ve already mentioned our preference for a larger front screen to be able to do more on the device without having to unfold when trying to complete simple tasks like quickly replying to a message.

What’s as stunning as the device itself is the price.

At $2999 it’s going to be the most expensive smartphone in Australia. 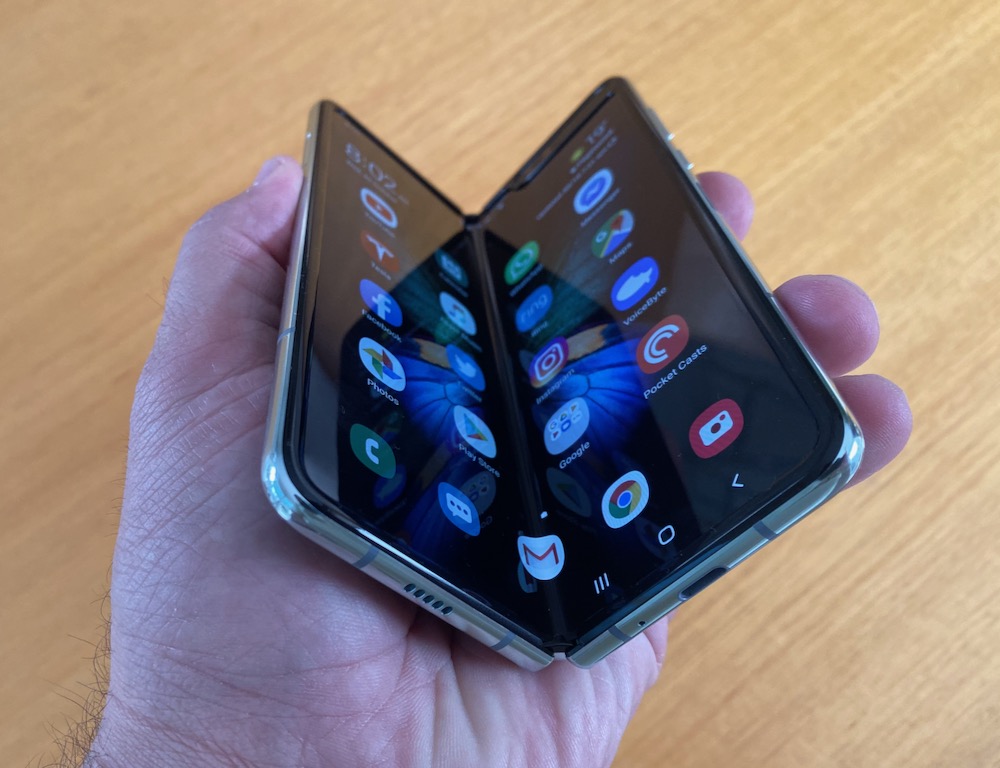 The Samsung Galaxy Fold does not have expandable memory.

If ever there was a device we would love to insert our microSD card with all seven seasons of the West Wing to view on the go – it is the Galaxy Fold.

There is 512GB of internal storage so you can load up the device with your favourite content but it would have been a hell of a lot easier if there was room for a microSD card.

The Australian version of the Samsung Galaxy Fold is a 4G LTE device.

Other markets around the world we’ll have the 5G model of the Galaxy Fold.

Anyone thinking of investing in the device (and at $2,999 – it really is an investment) will properly hang on to it for two, three or even four years without access to 5G which will be more widespread from 2020. 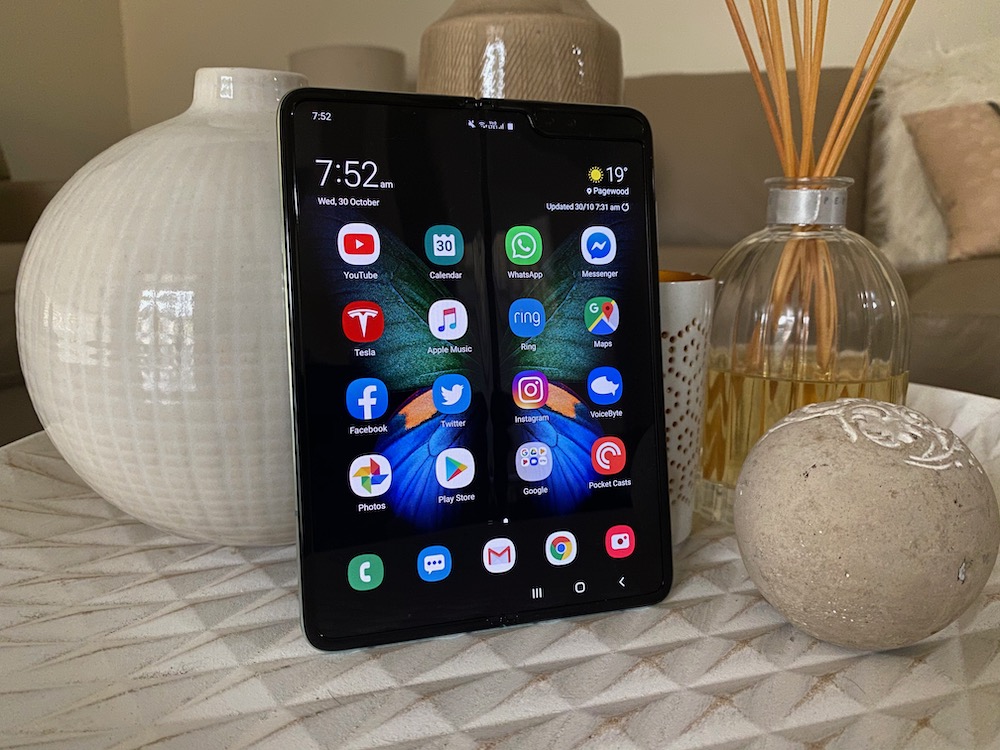 On the battery side, the Samsung Galaxy Fold is well-equipped with not one, but actually two batteries on board.

The dual battery system comes with a temperature sensor and has a combined capacity 4,380mAh.

For our review, the battery performance was excellent and crushed an entire day of usage, browsing, email and viewing content and still had about 40 per cent in the tank at the end of the day.

The device also has fast charging it took us about 90 minutes to get back up to 100 per cent.

The Samsung Galaxy Fold also has Wireless Power Share so you can charge other Qi-compatible devices like the Galaxy Watch Active or the Galaxy Buds.

The Samsung Galaxy Fold heralds a new and exciting era in smartphones. The device is brilliantly executed and provides an incredible experience on the move. It’s expensive and it’s not for everyone but for power users and anyone who enjoys a lot of content on the go it will be extremely attractive.