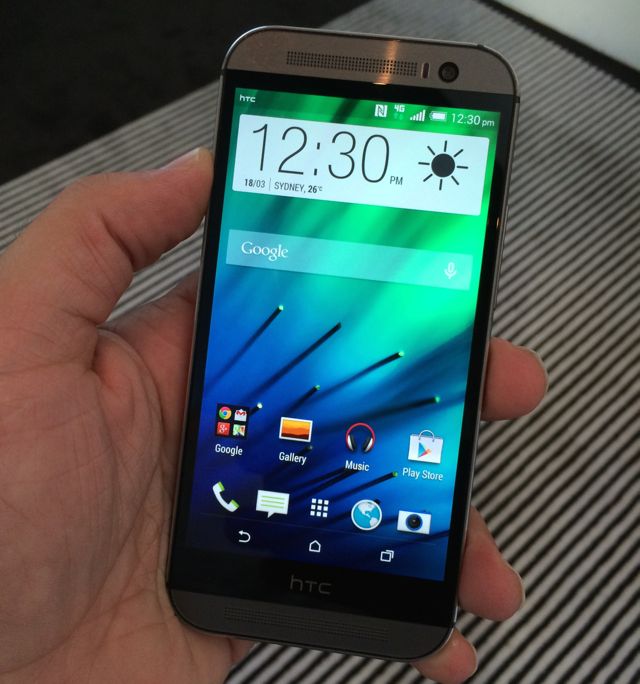 The first thing that struck us when we held the new metal HTC One M8 smartphone in our hands for the first time was how light it is.

Being made mostly of metal, we thought it would weigh more than your regular phone. It doesn’t.

Being wrapped in a jewellery grade finish definitely gives the device a real feel of quality and workmanship.

There have been complaints that some smartphones felt too “plasticky”. Those people definitely won’t have that issue with the HTC One M8.

Its curved back panel is smooth and rests comfortably in your hand to give you an even better grip on the device.

The 5-inch full high definition screen is bright and crisp and take almost the entire front face of the HTC One M8.

The new Sense 6 UI (user interface) looks and feels sleeker and lighter so it’s not spread too thick above the onboard Android 4.4 Kit Kat operating system.

HTC said the phone was designed to respond the user and it adopts new Motion Launch features.

Instead of having to find the small power button and press it to unlock the device – simply tap the screen twice. Tap it twice again and the screen is locked again.

Yes’s it’s similar to the LG G2 but one thing he LG doesn’t have are swipe commands. Swipe left on the locked screen and you get the home screen, swipe right and you get Blinkfeed.

Blinkfeed – the area that gathers all of the online news and social media content that’s important to you, has also been streamlined.

And you can now hone it even further so if you’re want to hear any news about even the most obscure topics, you can with the HTC One M8.

Flip the device over and you’ll see the dual cameras on the back panel to give your photos more layers and an added sense of depth.

Having this sort of feature on a smartphone really takes the pressure off the user.

If you have an object in the foreground or background – including a person or an entire building – you can tap on it and get rid of it. And there’s no need to learn how to use Photoshop either.

You can even add people to your photos so if you’ve got a couple of snaps you like you can now make them into one good image with the HTC One M8.

And being able to adjust the focus and play around with various creative options is only going to give people even more reason to make the device their main camera and leave the dedicated digital camera behind.

Taking photos with the device is fast – it can start the camera in less than a second to make sure you capture your image and it can focus in .3 of a second.

Music lovers will love the HTC One M8. There speakers above and below the screen whose holes have been micro dripped into the metal.

But what will make your jaw drop is the sound quality you’re going to get from the device.

It’s as good as the audio quality you’d hear with a dedicated Bluetooth speaker. So if you have the HTC One M8 – forget streaming to a speaker – just play your music out loud through the device’s own speakers.

Accessories are going to play a big part in the launch of the HTC One M8 with several companies already lined up to produce.

But it’s HTC’s own Dot View cover that will get people talking.

Not only can the cover protect the device but it can also put the product into a standby mode that allows info like time, weather from the screen to shine through the front flap and still be readable without having to open it.

And if you get a call you can answer or reject the calls by swiping up or down on the Dot View cover.

The HTC One M8 is a smartphone that lives up the smart name.

* Stephen Fenech travelled to New York as a guest of HTC

Jawbone UP24 activity wristband now on sale in Australia