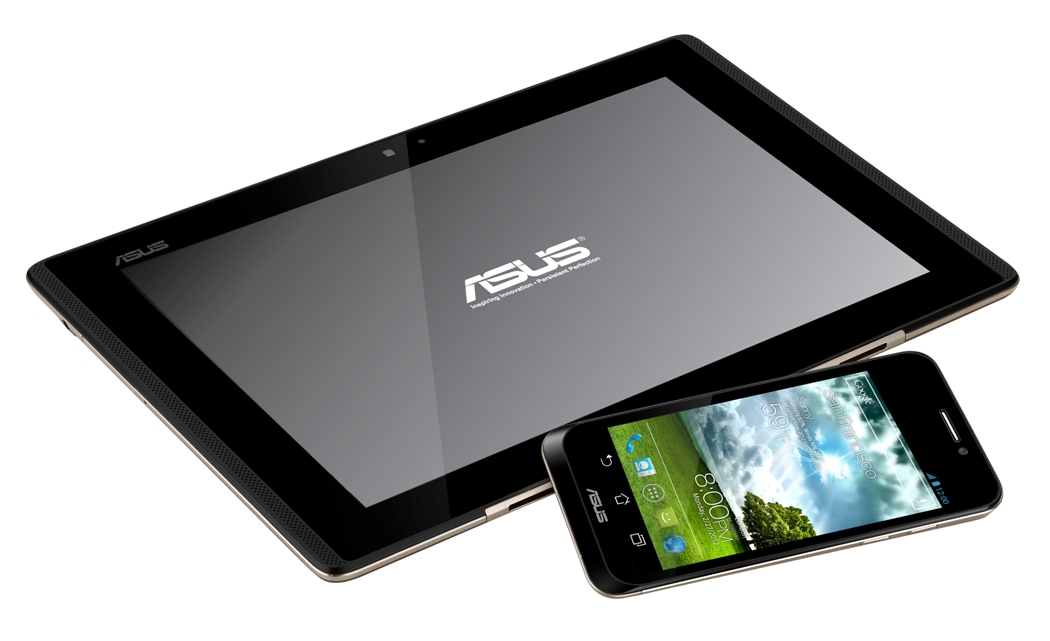 It’s not unusual for people to have both a smartphone and a tablet but Asus has united these two products like never before with the Padfone.

As it’s name suggests the device is actually two products in one – a tablet and a phone and they literally fit together like a hand in a glove.

The Asus smartphone fits under a flap on the rear of the tablet and provides its brains and data connection to access on a larger screen.

Users can even make a phone call on the tablet via the Asus smartphone while it is safely stowed inside the device.

The whole idea of the Padfone is to have the best of both worlds whether you’re using the device as a tablet and a smartphone.

In terms of design, both the Asus smartphone and tablet that make up the Padfone share a similar look.

The smartphone has a 4.3-inch screen with 960 x 540 resolution, is running Android 4.0 operating system and has a textured rear panel.

It is only 9.2mm thick and has an 8-megapixel camera with flash that’s capable of shooting full high definition video.

The flap that holds the smartphone in place inside the tablet station actually has two small holes so the smartphone’s camera and flash can still be used.

The tablet has a larger 10.1-inch screen with a 1280 x 800 resolution, its own front-camera and power port to recharge its own on-board battery.

In terms of performance the Asus Padfone has a Qualcomm 1.5Ghz fourth generation processor to provide fast and slick operation.

Using Asus proprietary technology Dynamic Display users are able to automatically adjust the smartphone’s 4.3-inch screen and scale it up to the tablet’s 10.1-inch screen as soon as the smartphone is clicked into place under the docking flap.

This works well for email, web browsing and even playing games because Padfone always remembers where you’re up to when you connect the smartphone.

And it leaves right off exactly where you were when you disengage the smartphone from the dock.

But one thing to note – the Padfone, without the smartphone docked inside it won’t work.

It is like a larger monitor and will be just another accessory you’ll need to carry around when the smartphone is not resting in the dock.

But what about phone calls? When the Asus Padfone is detached from the tablet station it works just like any other mobile.

But what about if you get a call in tablet mode? Holding this thing to your head will make you look pretty silly.

Which is why Asus have included a Bluetooth stylus. The device has a soft rounded tip to use instead of your finger in the smartphone or the tablet screen.

This helps reduce the amount of fingerprints that can smudge on the screen.

But being a Bluetooth stylus also means it can be paired to the device. Now if you look closely there is actually a speaker and microphone so, in fact, it can be used like a phone.

From a convenience point of view the stylus solution is a little easier to manage and a lot smaller but that still doesn’t remove the fact that you’ll look like you’re talking into a pen.

Or you can simply detach the smartphone from the dock and answer the call that way.

There are many advantages of having the Asus tablet and smartphone linked together in this way.

The first is that your data is always up to date and in the same place no matter which screen you’re viewing it from.

Another is the convenience of having a larger screen to work with when the smaller smartphone screen isn’t enough to get the job done.

But perhaps one of the biggest advantages is the battery life. Both the Asus smartphone and tablet have their own batteries.

That means you can have a total of 63 hours of battery life between both the Asus smartphone and tablet.

If the smartphone is running low on battery, simply insert it inside the tablet’s dock and you’ll get more power and extend the battery’s life.

Between the two batteries we easily got a day and half of battery life.

On the memory side the Padfone smartphone is available with 32GB flash memory but it also a microSD card slot to extend the storage even further.

Having the keyboard dock, apart from the obvious benefit of having a physical keyboard, also adds another rechargeable battery to the system and can take your battery life up to an amazing 102 hours.

The Asus Padfone provides a convenient solution for the user who wants a consistent experience when using either a tablet or a smartphone without the need to fuss over syncing data between the two products.

The Padfone also eliminates the need for two separate data plans because essentially you are using the phone’s data connection.

Now this can also be achieved with other smartphones when used as a wireless hotspot with a tablet.

The downside of the Padfone system is they can’t work when separated so there’s no handing off the Padfone tablet to your child to play a game, for example, when making a call on the smartphone.

While there’s a certain convenience factor behind the whole design of the Padfone, the tablet portion is just another accessory that has to be carried around when not in use.

But on the bright side there’s the price which, at $999, delivers a Android 4.0 smartphone and a tablet/monitor and Bluetooth stylus.

If you were to buy these products separately – a smartphone and a tablet – you’ll be paying a lot more but, of course, the tablet will work independently of the smartphone and data would have to be synced via cloud storage.