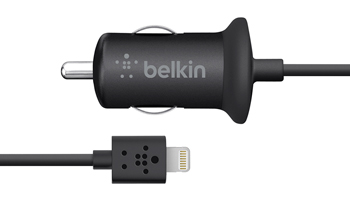 Belkin has become the first third-party manufacturer to release accessories designed to work with Apple’s new smaller Lightning dock connector on the iPhone 5 and the latest iPads and iPods.

Belkin’s Car Charger for Lightning and the Charge and Sync Dock are available now and will be the first of many Lightning compatible products are scheduled to launch.

“Belkin ANZ is thrilled to announce that we will be first to market with solutions for the new Apple Lightning connector,” said Brendan Sparks, Head of Marketing and Product Management ANZ.

This is an updated version of Belkin’s slim profile car charger and includes a 1.2m Lightning cable.

It is available in black and can supply 2.1amp charge which means it has enough power to also charge the full sized iPad.

It also has over-voltage protection to protect a device that requires a lower power charge.

Users can charge and sync and still hear their movies and music when their iPhone 5 is connected to the Belkin Charge and Sync dock.

The dock doesn’t come with an included Lightning cable but the user can easily use the cable that came with their device and feed it into place thanks to the removable magnetic base.

Also onboard is a foldaway AUX connection that links through the iPhone 5’s headphone jack.

Anyone who still want to listen to music or watch a video can simply connect their earphone or speakers to the audio out jack on the back of the dock.