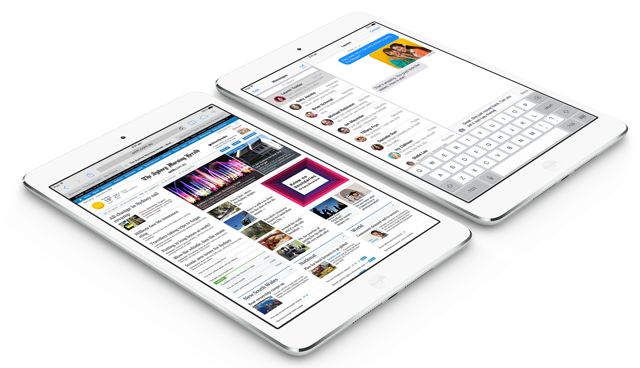 All of those pixels and screen resolution have been packed into the thin and light 7.9-inch device.

And that’s not the only thing Apple has shoehorned onto the product.

Also on board the iPad Mini with Retina Display is the same A7 64-bit processor that is also found on the larger iPad Air.

So right off the bat, the only choice customers have to make when buying an iPad is deciding on the screen size.

And if they do decide on the iPad Mini with Retina Display, having a smaller screen does not mean they have to make any compromises on the performance.

Under the hood both products are identical – the only difference is that screen size.

The iPad Mini’s 7.9-inch screen size is an excellent choice for a number of reasons.

The first is that all of the apps – and there are more than 475,000 designed just for the iPad – will scale perfectly on the smaller screen.

But another interesting fact is the 7.9-inch screen – slightly larger than the popular 7-inch screen size on the market – offers up to 35 per cent more screen space because of that extra .9 of an inch and the wider shape of the screen.

The biggest new feature of the iPad Mini is the new Retina Display which fits in more than 3.1 million pixels into the screen with a resolution of 2048 x 1536 with 326ppi (pixels per inch).

In short, it’s looks gorgeous. Your pictures, videos, websites, ebooks and apps all look amazing on this screen.

And with the A7 64-bit processor on board it can handle some high-end apps for picture and video editing and design as well.

The device is just 7.5mm thick – amazingly the larger iPad Air is the same thickness – and it weighs a featherweight 331g.

And because of its handy size, the iPad Mini is easy to hold and grip with one hand.

This makes it ideal as an e-reader using the onboard iBook store. Reading books on the iPad Mini – and the iPad Air for that matter – is an enjoyable experience.

It offers the convenience of e-books as well as a realistic animation of the each page turning. You can even see the words from the underside of the page as you turn it.

On the connectivity side the iPad Mini has improved wi-fi performance with dual band antennas and MIMO (multiple in multiple out) technology that can easily connect at high speed with 2.4Ghz and 5Ghz 802.11n networks.

We would have loved to see the latest 802.11ac wi-fi standard on board but having MIMO onboard still offers a noticeable improvement.

Apple reportedly left 802.11ac out of the iPhone 5S and the new iPads because the new standard has an impact on battery performance.

But that didn’t stop Apple including 802.11ac on its latest MacBook Pro and MacBook Air models because they have bigger batteries.

Speaking of the battery, the iPad Mini with Retina Display still offers excellent battery performance with more than 10 hours of usage between charges.

This is a direct result of the improved A7 processor that not only offers an increase in speed but also makes the device work more efficiently to conserve power at every opportunity.

Another impressive improvement for the wi-fi + cellular version is the addition of even more 4G bands to make it support cellular networks around the world.

In fact, Apple now only makes one 4G iPad model which can be used anywhere in the world whereas last year they had to make different versions for different markets around the world.

The iPad Mini was already an impressive product but with the addition of the Retina Display, a faster processor, excellent battery life and 4G connectivity anywhere in the world – it’s an irresistible choice if you’re looking for a smaller tablet.