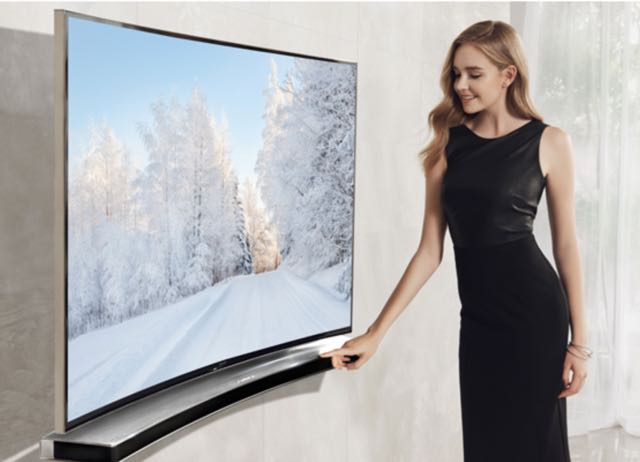 Samsung has expanded its curved TV portfolio that will include the world’s largest curved Ultra High Definition television – a 105-inch model unveiled at IFA in Berlin.

With a panoramic aspect ratio of 21:9, the 105-inch TV rests on its own stand and provides an immersive cinema-like viewing experience in your home – if you can afford it.

The product will be available in Australia and pricing has yet to be announced but it will likely be easily more than $100,000.

The 105-inch curved UHD TV has more than 11 million pixels on the screen with a resolution of 5120 x 2160 which is actually five times the resolution of full high definition.

Samsung also introduced the world’s first and largest bendable TV with a 105-inch UHD screen that allows the viewer to decide whether they want to watch it as a flat or a curved TV.

And it’s not just the TVs that are curved at Samsung.

The company has also revealed a curved soundbar – the HW-H7500 and HW-H7501 – to match the curvature of Samsung’s expanding range of curved TVs.

The M3 speakers, like the popular M5 and M7 – can be used in any room in your home and controlled wirelessly from within your network.

The speakers can also be linked to your Samsung Smart TV to act as surround sound speakers.