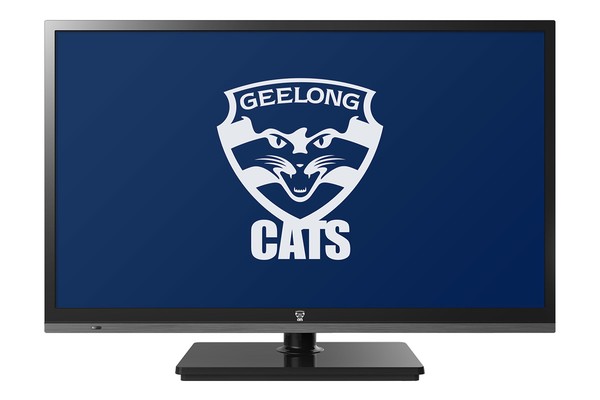 Priced at just $249, the Kogan official Geelong 32-inch LED TV has the logo on the frame of the TV and on the remote control as well as on the start up screen every time the set is turned on.

This isn’t the first time Kogan has released a branded TV for AFL fans. Last year in July the company released a Collingwood TV.

“Geelong fans certainly have much to be proud of being one of the top footy clubs and Kogan’s Limited Edition Geelong TV is another way to show their loyalty to the team,” said Ruslan Kogan, company founder and CEO.

And, of course, the limited-edition TV was welcomed by the Geelong AFL club.

“Our supporters are passionate about their team and nothing could be better than watching the Cats play on a Geelong TV,” said Geelong general manager for commercial operations David Lever.

“This is a great initiative by Kogan to allow our great and passionate supporters and members to watch ‘the greatest team of all’ in action in high definition.”

The Geelong 32-inch LED TV has a high definition resolution of 1366 x 763 and has three HDMI inputs, and a USB port which can be used to connect powered external hard drives up to 1TB to store recordings from the built-in PVR.

The Geelong 32-inch LED TV is available for pre-order here with a delivery expected in mid July.