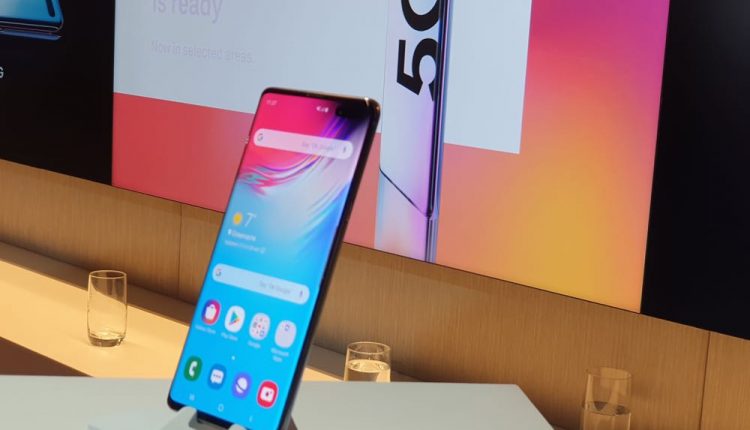 Telstra has impressively demonstrated the speed of its 5G network with Samsung’s new Galaxy S10 5G smartphone – the first 5G handset to be released in Australia.

From tomorrow (May 28) customers can get their hands on the Samsung Galaxy S10 5G which boasts a 6.7-inch display, a six camera system and a 4,500mAh battery with fast charging.

Also available on the Telstra 5G network this week is the HTC 5G Hub – the world’s first 5G mobile hotspot that also has a place in the home with the ability to connect up to 20 devices wirelessly.

The biggest attraction to 5G is the speed and Telstra certainly impressed with its demonstration using the Samsung Galaxy S10 5G at its Sydney CBD headquarters.

Using the Speedtest app on the Galaxy S10 5G, the Telstra 5G speed got up to an incredible download speed of 1.216Gbps – that’s 12 times faster than the NBN.

Telstra says customers can expect speed in 5G coverage areas to be twice that of 4G.

The telco has already deployed 5G in 10 cities around Australia with a goal to expand to 25 more cities and major regional centres within the next 12 months.

“This is a game-changing moment for our customers. We are putting the future into their hands. 5G promises our customers even better connectivity,” says Telstra consumer executive Kevin Teoh.

“Ultrafast speeds, ultra-low latency and greater bandwidth will transform the way we live and work by enabling all sorts of future applications and technologies.”

Australia will become the third market in the world to receive the Samsung Galaxy S5 after South Korea and the US.

Samsung sees Australia as a formative market with expectations high the technology will be quickly adopted by customers.

Customers who purchased the Samsung Galaxy S10+ smartphone through Telstra will be able to upgrade to the Galaxy S10 5G for free when they hand in their device in reasonable condition.

Those who wish to take up the offer have until June 18 to do the swap.

“Today is an historic moment in smartphone technology. Australians will be amongst the first in the world to experience the power of 5G as this is the third country globally where Samsung has launched the Galaxy S10 5G,” said Samsung vice president, mobile division Garry McGregor.

“We are delivering on a longstanding commitment to ensure that Samsung continues to set new milestones with its smartphones through meaningful innovation in design, engineering and network collaboration.

“There has been many years of research and development to get to this point and today represents the next chapter for what mobile technology can offer to Australians.”

Tech Guide took a hands on look at the Samsung Galaxy S10 5G which is noticeably larger than the Galaxy S10+ but only 0.1mm thicker.

The biggest new feature, apart from 5G connectivity and the larger display, is the six camera system which has depth sensors front and back to take portrait style photos and videos with adjustable background blur.

Sony Bravia TVs will now include the Kayo Sports app