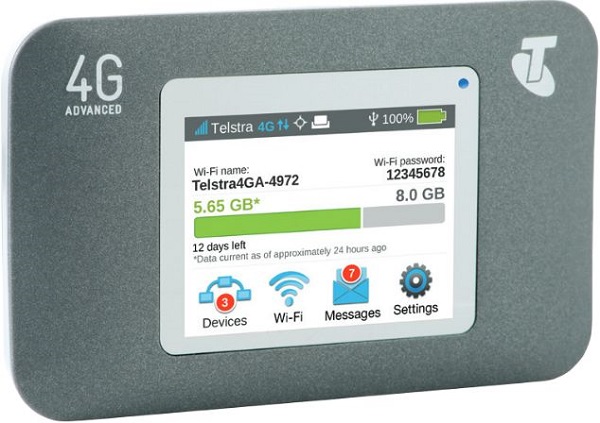 Telstra has released an advanced new 4G hotspot that can connect up to 10 devices to Australia’s most extensive 4G network.

The Telstra Wi-Fi 4G Advanced has a 10-hour battery to connect to the speedy network and then create a hotspot for other devices like smartphone, tablets and laptops.

It has a 2.4-inch colour screen and can display information like data usage, network name, number of products connected and the remaining battery level.

The release of the new product comes as Telstra connected its 3,000th 4G base station in Dalby, Queensland.

The company says it only has 500 base stations to go to hits its 3,500 target by Christmas and to have 4G coverage to 85 per cent of the Australian population.

Telstra’s 4G network covers an area that is four times greater than any other telco in Australia.

Also on board the device are 4G Category 4 and 3G Dual Channel so customers can access the fastest connect that’s available to them in that particular area.

It also has dual band wi-fi and can provide coverage on the 2.4Ghz and 5Ghz bands.

The Telstra 4G Wi-Fi Advanced is available now on a 24-month contract for $6 a month on the $50 Telstra Mobile Broadband plan which also provides 8GB of data per month to use anywhere in Australia.

Go back to the future with retro portable Crosley turntables