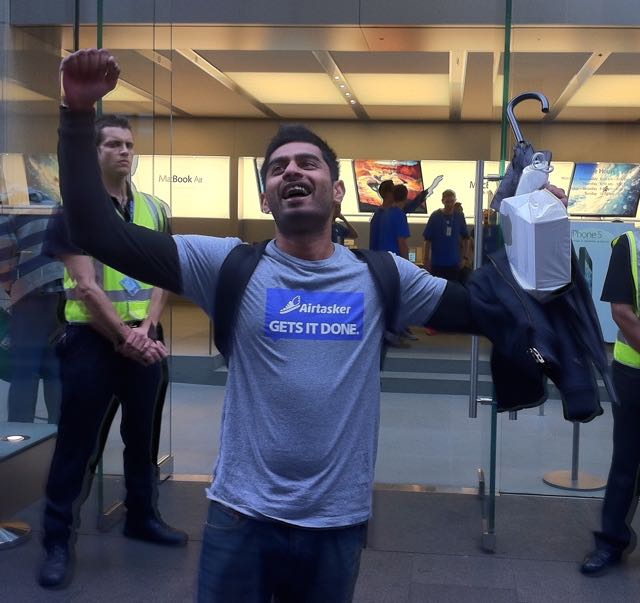 The iPhone 6 and iPhone 6 Plus are a week away from release but there are already people lining up to buy them when they go on sale on September 19.

But some of the people who want the new iPhones on day one won’t actually be in the lines outside the Apple Store themselves.

These individuals have posted those jobs on Airtasker the outsourcing site and will pay others to wait in the line for them.

Airtasker is the site for time poor people to get things done and for those looking to earn extra dollars with their skills, talents and their time.

One person using Airtasker is 20-year-old Alex G who is offering $150 for someone to wait 24 hours before the launch.

“I want it early because if you don’t get it early you have to wait almost a month for the second release and I can’t bear the fact that there’s other people that have it and I don’t,” he said.

“I’ve had every single iPhone since the 4, I haven’t lined up because back then I was in school but last year when the 5S came out I actually lined up myself.

“This year I’ve got a job and it’s a bit inconvenient and you’re really tired the next day so I thought it’s better to just pay someone. I’ve got two people lined up.”

The person who took up Alex’s task is 41-year-old Adam Kirkley from Brisbane.

“I’m going to line up 24 hours beforehand, which probably works out to be $5 an hour but I don’t have to do much.

“I’m not interested in technology and I don’t want the iPhone 6 for myself, I’m just going to take my chair and my iPod and get paid.”

Domenic Carosa is an entrepreneur who has also posted the job to queue for the new iPhone on Airtasker.

“I’m a devoted Apple fanboy. I want to get things on the first day,” he said.

“I’ve actually posted an advert for both Melbourne and Sydney because I don’t know which state I’m going to be in, so I’ll basically get two.”