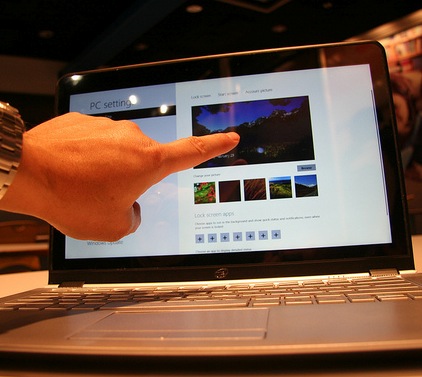 Do you prefer using a touchscreen tablet or would you rather have a laptop? According to research from Intel consumers actually want both.

Recent Intel user testing showed people want to use a single device which has a keyboard and a touchscreen.

And it’s not just a matter of adding a keyboard to a tablet. The majority prefer a laptop which opens and closes and includes a touchscreen display.

Touchscreens have usually only been reserved or devices like smartphones and tablets because they can be held at a comfortable angle with our arms in a relaxed position.

But enabling touch on a laptop – considered a “vertical” screen has been thought to result in what engineers call “gorilla arm”.

This is a condition to describe the tiring effect of holding your arm up to the vertical touch interface.

The company found users spent 77 per cent of the time touching the laptop’s screen while surfing the web, adjusting the settings, viewing and editing photos and viewing online video.

“People told me that touch on the laptop was intuitive, fun, immersive and freed them from the mouse and trackpad, especially when they discovered actions like flicking the screen to scroll up or down and navigate between tasks,” said Daria Loi, a user experience manager at Intel.

Intel says the study dispelled another industry concern about the hinges holding the screen upright not being able to withstand constant touching and pinching.

In many cases, users in the test group tilted the laptop screen back and used their thumbs on the screen in a similar way they would with a tablet or smartphone.

And while the touchscreen was popular, users expressed strongly that they still wanted a physical keyboard because they liked the tactile feel of the keys under their fingers.

Most users said they didn’t like using the virtual keyboard even though they favoured the touchscreen as an input method.

Intel says the release of Windows 8 later this year will also have a big effect on the number of laptops produced with touchscreens as the new Microsoft operating system has also been optimised for touch.