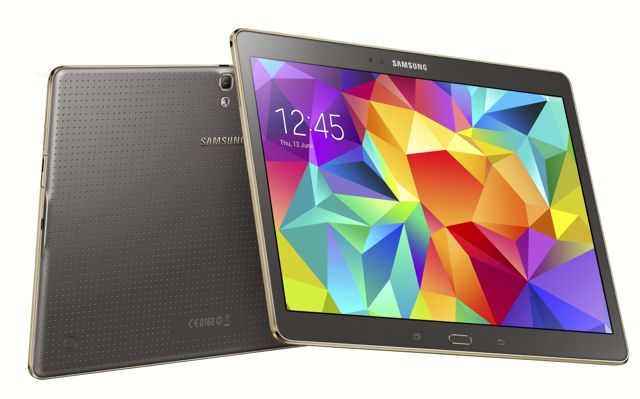 It will be available with 16GB and 32GB onboard capacities plus a microSD card slot to increase the memory by up to an extra 128GB.

Under the hood is the Exynos 5 Octa processor – actually a 1.9Ghz and 1.3Ghz quad-core processor working together – so the performance is equally impressive as the rest of the product.

But despite the head-turning design, it’s the impressive Super AMOLED screen that will really grab users’ attention.

It is the same type of ultra-sharp screen Samsung uses in the popular Galaxy S5 smartphone with a resolution of 2650 x 1600.

With TV-like quality, the display has a contrast ratio of 100,000:1 – that’s 100 times greater than a regular TFT LCD screen for better whites and black levels. It also has a 20 per cent larger colour range than an LCD screen.

The display is also adaptive so it can automatically detect ambient light and adjust the brightness, sharpness and colour to optimise the screen quality to suit the conditions.

Samsung’s decision to include a screen of this quality was to provide an uncompromised viewing experience.

The company’s research revealed users spend most time on their tablets watching videos, playing games and browsing the web.

With that in mind Samsung hopes the high quality Galaxy Tab S will appeal to customers who want to enhance that experience even further.

On the design size Samsung took considerable care with the look and feel of the Galaxy Tab S with architectural aesthetics.

In fact the look of the product from side I was inspired by the look of a flat pool that’s been filled to the point of overflowing.

When it comes to connectivity the Galaxy Tab S delivers in several areas and can seamlessly link to other Galaxy devices like smartphones and smartwatches.

A feature never seen before on a Samsung tablet is SideSync 3.0 which uses a direct wi-fi connection to mirror their Galaxy smartphone on the Tab S.

Once connected an exact image of your device sits on the screen to make it possible to access not only all of your apps and the functionality of the smartphone but also the ability to make and answer calls on the tablet.

Callers can also share information like maps and pictures from the Galaxy Tab S to the person they’re calling through their linked smartphone.

The Galaxy Tab S has also inherited the fingerprint scanner that was introduced with the Galaxy S5 smartphone. It can store three fingerprints per user.

Multi-user mode make it easy to share the device with your family with up to eight users able to set up their own log-in profiles and fingerprint security on the device.

Samsung customers who purchase the Galaxy Tab S will also be able high quality content that will showcase the screen’s amazing quality.

PaperGarden is a new portal that allows users to access premium magazine content that will display boldly on the device.

Accessories for the device will include a cover that clips securely to the Tab S like a clip button on a shirt rather than using magnets.

The Samsung Galaxy Tab S will be available in July with Australian prices to be announced closer to the release date.