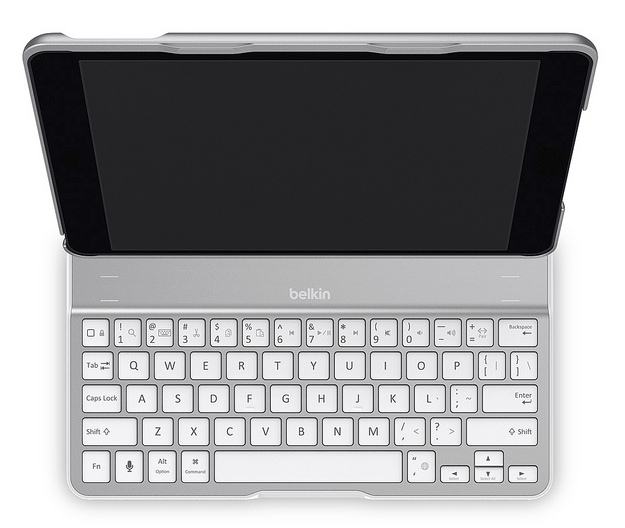 Even before the iPad Air has hit the market, Belkin has already revealed its new range of cases and keyboards designed to work with Apple’s lighter, thinner device.

The collection includes three new Qode keyboard cases and a range of folios that are ideal for use whether you’re on the move or just relaxing with the iPad Air.

Belkin’s new products have been designed to not only protect their precious cargo but to also add versatility and comfort to the user experience.

The case is made out of aircraft grade aluminum so it’s strong and light while offering a premium look and feel.

The TruType keys are well-spaced for more accurate typing while the case can be positioned in three different viewing angles.

And when you just want to use the iPad Air’s touchscreen, the keyboard folds away into the case for easier handheld use.

Available in black and white, the Qode Ultimate Keyboard Case for iPad Air has a rechargeable battery that can run for more than 260 hours.

Belkin’s keyboard case and screen cover has function and iOS specific keys and can securely hold the iPad Air in place with a magnet.

The case is less than 4mm thick and can be positioned at two angles to allow portrait or landscape viewing.

The Qode folio style cover incorporates a keyboard with TruType keys for those times when typing on the screen just won’t cut it.

It has a stand to position the iPad Air for viewing or typing and also has handheld mode so the keyboard can fold neatly out of the way.

The LapStand used proprietary technology to keep the iPad Air steady in your lap along with ComfortForm material that can mould to your body and create a stable base for viewing or typing.

It is available in charcoal, red, cream and sorbet.

The MultiTask Cover for iPad Air ($69.95) is crafted from natural grain leather and has room to store a stylus and business cards and is designed for business users on the go.

All of the Belkin accessories for the iPad Air will be available from November.