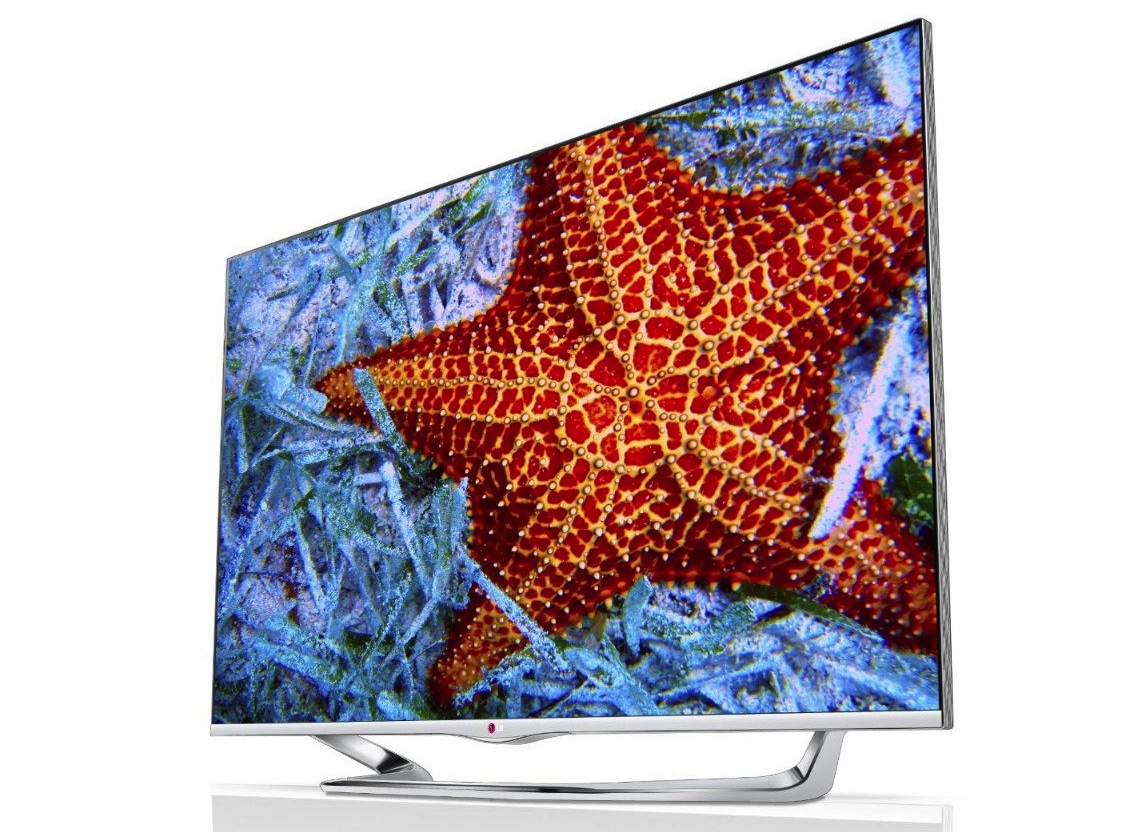 The 55-inch TV has taken a step up in terms of design and function for the 2013 range and integrates with your home network and the other devices in your household.

A lot has gone into this new model with an obvious improvement in quality inside and out.

The LG LA7400 has a sleek design with a swivel stand that gives the impression the screen is floating above the surface.

The TV doesn’t have a bezel with a single silver strip along the bottom edge of the display.

It is framed with a thin metal strip outside a black frame within the screen.

The result is a virtually borderless TV so the viewer can see nothing but the excellent full high definition picture.

The LA7400 is designed to look good in any room with its minimalist style whether it’s on a stand or mounted on the wall.

It’s hard to go past the most obvious and impressive feature of the LA7400 and that’s the picture quality.

It is remarkable and is the result of a combination of technologies including LED Plus, TruMotion, Triple XD Engine and Contrast Optimiser.

LED Plus is all-new backlight technology which offers control of the LEDS in the panel for enhanced contrast and colour.

TruMotion smooths out the picture when there are fast moving images and reduces motion judder while maintaining a high refresh rate.

Triple XD Engine is the LA7400 image processor and is responsible for providing the colour, contrast and clarity that is represented in the screen.

Contrast Optimiser lives up to its name and, when combined with LED Plus, contrast, brightness and picture detail can be localised and adjusted in different areas of the screen at the same time.

On the connectivity side there are USB ports to allow viewers to watch movies or listen to music directly from a hard drive or thumb drive.

Users can also use the USB port to connect a hard drive and turn the LA7400 into a PVR (personal video recorder) as well.

It’s not just the picture that will attract you to LG’s LA7400 but also the connectivity which links your screen to the internet by cable or with the built-in wi-fi and to your home network to access content, download apps and browse the web.

The Smart Home is the dashboard on the TV where users can access apps, the internet, their settings, connected sources and other content.

And it’s easy to navigate with either the regular remote or the Magic Remote.

The improved Magic Remote puts a pointer on the screen that is easy to guide around the screen to navigate the features in the same way you would with a mouse on your computer.

You can even download a smartphone app for iPhone or Android which gives you complete control of the TV and even lets you watch the current channel or a different channel on your device while on the same network.

The app also lets you control the volume, program up and down and the smartphone’s touchscreen can turn into a trackpad to move the arrow around the screen.

The connection to your home network makes outside content accessible but can also put the content inside your home on various connected devices at your fingertips as well to enjoy on the LG LA7400’s screen.

Miracast also makes it easy to wirelessly share your compatible mobile, tablet or laptop screen on the LG’s 55-inch display.

With the addition of the LG Video Call camera, which can be purchased separately, it’s also possible to turn the TV into a Skype video phone. And with such a large screen you can fit a lot more people into the shot and into the conversation.

Of course the LA7400 is a 3D TV as well and uses lightweight battery-free glasses so there’s no need to charge them or replace batteries. When you’re ready to watch 3D, the glasses are ready to go as well. It comes with four pairs of glasses.

Picture quality has improved even further over last year’s models which themselves where a step ahead of the previous generation.

Several viewing modes are available – vivid, standard, cinema, gaming and eco along with two other modes which can be professionally calibrated.

For our use we took on the vivid mode and only had to make slight adjustments to the settings to set the picture to our taste.

Users can adjust the backlight, contrast, brightness, sharpness, colour, tint and colour temperature so you can get the picture exactly how you like it.

But if that sounds too complicated there’s always the Picture Wizard II which can take viewers through each step of the process to optimise the picture to your taste.

It simply asks you to pick between the better of two pictures at each step until you’re done.

Picture quality is sharp and crisp with a nice balance of brightness and contrast for a natural life-like picture.

Skin tones are accurate while at the same time the blues, reds and greens are warm and rich without being oversaturated.

Contrast is also impressive with excellent black levels and plenty of detail in those dark scenes.

Sound quality is also above average thanks to the Smart Sound Mode which adapt to the content being viewed whether it’s music, movies, sport or games.

The LG LA7400 has a 2.1 channel sound system built-in along with a feature that recognises and enhances to volume of human voices in movies and TV shows.

The LG LA7400 is a smart TV that offers excellent picture quality and the latest smart features in one package.

It has the connectivity to put the latest content and information at your fingertips and the credentials to provide an all-round entertainment experience in your home.