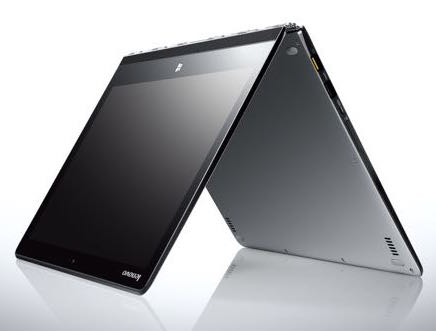 Lenovo’s new YOGA 3 Pro is a lot more than just an ultra book thanks to a unique new design and commitment to adapt to the customer instead of the other way round.

This hybrid convertible device has the power of a work horse and the fun of a tablet all rolled into one.

It’s equally at home at work or play whether it’s powering through a document or watching a video.

Lenovo’s design direction with the YOGA 3 Pro, which is running Windows 8.1, was to make it a product of many guises.

The star of the show that enabled the product’s versatility is the new watchband hinge. It is made up of more than 800 pieces of steel and aluminium.

It resembles the links of a watch and runs the length of the device with six points of stability to allow the screen to be moved in any direction.

The innovative new hinge means the YOGA 3 Pro can be laid out flat, positioned like an ultra book, folded backwards into stand mode, turned on its head in tent mode and folded all the way back on itself in tablet mode.

And of course the screen adjusts to the mode it happens to find itself in and the device also confirms this with a notification in the top right corner of the screen as soon as it detects its new position.

At first glance it looks like a thin ultra book with a familiar form factor.

The device is remarkably thin at 12.8mm and weighs in at just 1.19kg. The watchband hinge has helped reduced that overall thickness.

In the closed position the YOGA  3 Pro tapers from back to front and when you actually pick it up you’ll be impressed by both the light weight of the product and its svelte proportions.

Despite the wafer thin design there has been no compromise on the connectivity side.

There are three USB ports with one cleverly doubling as a charging port as well and yet again another way it saves space and thickness.

Also on board is a mini-HDMI out port, an SD card reader along with a 3.5mm headphone/audio jack, screen rotation lock key, volume controls and the on button.

Opening the computer was a little frustrating as there is no recess to pry the lid open with one hand.

We had to grip the computer with two hands with one to hold the bottom still and the other to lift the lid.

In laptop mode the user is presented with a 13.3-inch Quad HD touchscreen display with a resolution of 3200 x 1800 plus a full-size five-row keyboard.

What you don’t get is a dedicated row of functions keys. On the YOGA 3 Pro the number keys have to double as the function keys.

The YOGA 3 Pro screen is bright and crisp with excellent colours, amazing detail and impressive contrast.

Websites, photos and movies looked great on the display which can be positioned at any angle you want courtesy of that watchband hinge.

There is a decent sized wrist rest along with an ample track pad that allows easy screen navigation and left and right mouse button options.

The area around the keyboard is covered in a rubberised material to make it easy to keep your hands or wrists from slipping no matter which way you happen to be holding it.

And the keys themselves are slightly smaller than usual which meant it took a little while to get used to typing on the device.

Under the slender hood of the YOGA 3 Pro is the Intel Core M-70 processor that can take the credit for offering impressive performance while still fitting inside a chassis as slender as this one.

The processor listed at 1.1Ghz can actually run at up to 2.6Ghz with a turbo boost.

Graphics are also handled from the same silicon through the integrated HD 5300 so you’ll get smooth performance but high-end gaming might be a stretch.

There’s also 8GB RAM on board and a 256GB SSD (solid state drive) with an option for 512GB capacity.

Speed is evident from the moment you turn on the device – it’s up and running in less than 10 seconds. It also wakes from sleep just as fast.

Having a touchscreen makes the YOGA 3 Pro so much more versatile and, of course, works in every mode you use with the device.

There’s also pre-loaded software called Harmony that can adapt the device more closely to you to suit your usage habits.

It recognises the mode the YOGA 3 Pro is in and shares insights like your most used applications in each of these modes and other stats about how you use the product.

On the battery side, Lenovo says the device will run for up to nine hours on a single charge but our testing brought it in at slightly less at around the eight and a half hour mark.

There are different modes to conserve power – balanced, performance and power saver – so you get to decide how you want to use your battery.

The battery icon is always displaying time left before a recharge. Even at 20 per cent capacity there was still more than an hour and a half of use before you need to reach for the charger.

And when it does hit the 20 per cent mark it asks to take the YOGA 3 Pro into power saving mode and brings down the screen brightness and switches off the speakers.

Lenovo’s YOGA 3 Pro is a device that will appeal to a wide range of customers thanks to its amazing versatility as a computer, as a tablet and as a hybrid device.

The innovative watchband hinge gives the device an edge over its competitors and enhances its style and design.

As a result the YOGA 3 Pro has the ability to suit any situation and provides the performance to meet the needs of a consumer at work or play.