The next generation of drones was unveiled on Sydney Harbour with the new 3DR Solo making its maiden voyage over the iconic waterway to capture amazing pictures and videos.

What sets the 3DR Solo drone apart is its computer-assisted flight and camera control.

This onboard intelligence can help users capture professional looking footage and images.

Onboard is a GoPro camera that is stabilised with a gimbal that can stream live video to an Android device or iOS device. 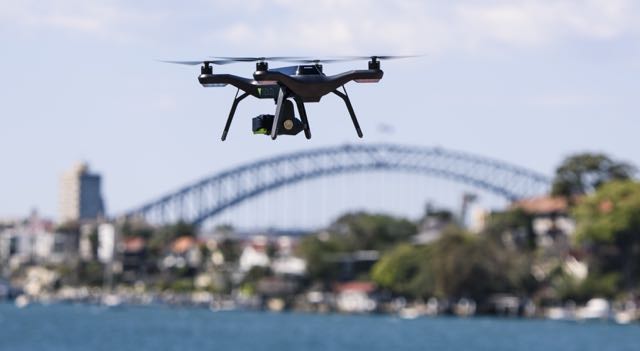 For its first flight in Sydney, the 3DR Drone lifted off from Cockatoo Island and captured a 360 video of the island and the harbour using its Smart Shots technology.

The “smart” drone has preset manoeuvres to execute certain shots in the controller app.

For example – the user might want a “dronie” – a selfie captured by the drone – and the 3DR Solo goes ahead and flies off on its own to shoot the video.

The smarts also extend to the controller which has been ergonomically designed and easy to use.

“Today, we were able to capture the rich beauty of Sydney’s harbour with limitless imagination”, said Colin Guinn, SVP of Sales and Marketing for 3DR Robotics.

“This is the first time Solo was able to record vision in this country, and we look forward to more Australians capturing the wonder of their own backyard.”

It is available from Harvey Norman and independent resellers including www.sphere.net.au.