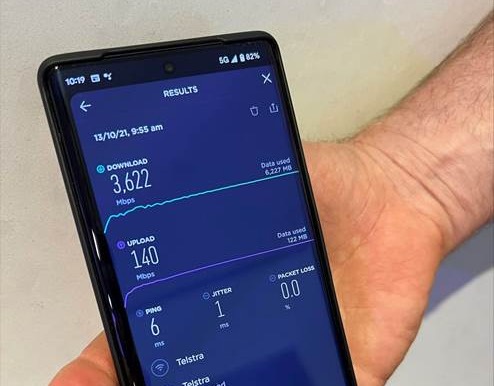 Telstra has clocked an incredible speed of 3.6Gbps in the Sydney CBD using the new Google Pixel 6 Pro – the first smartphone in Australia to support mmWave 5G.

Telstra sees mmWave as the next stage in the evolution of 5G.

It can dramatically improve the capacity of the network by a factor of 10 when compared to Sub 6 and deliver much faster speeds.

mmWave signals only travel a few hundred metres from a cell are best suited for areas of intensive customer demand including transport hubs, shopping districts, airports, sports stadiums and tourism hotspots like the Sydney Opera House on New Year’s Eve.

mmWave allows tens of thousands of people at one location to connect stream or upload content simultaneously.

There are already 65 live Telstra mmWave 5G sites with plans to almost triple that number before the end of the year.

Telstra’s current mmWave sites which provide fast 5G coverage and extra capacity include the Queen Victoria Building, the Opera House and Darling Harbour in Sydney, the MCG and Flinders Lane in Melbourne and Fortitude Valley in Brisbane.

Meanwhile, Optus says it has been testing its own mmWave sights for the last six months which delivered speeds of more than 4.5Gbps in a commercial environment and greater than 5Gbps in a lab using a fixed wireless modem.

Optus is calling its mmWave rollout 5G Max which will offer speeds 40 to 80 times faster than the current speeds on 4G and the NBN.