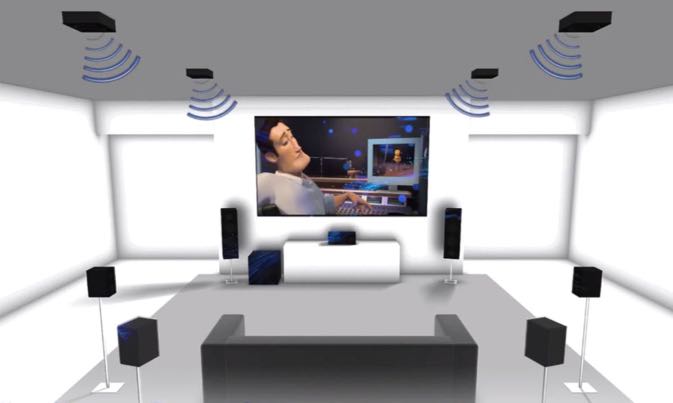 Surround sound in cinemas and in our homes has been reinvented with a new audio format called Dolby Atmos to create a multi-dimensional experience.

With 5.1 and 7.1 channel sound we’re already used to hearing sound all around us.

But now with Dolby Atmos the sound can truly envelope the viewer and not only comes from all directions but also from above our heads.

It’s being called the biggest thing to happen to home theatre in 20 years.

Tech Guide had a chance to experience Dolby Atmos (short for Atmosphere) in the Onkyo offices – one of the first companies to produce Dolby Atmos compatible products.

We were played a number of clips in the Onkyo theatre which had a 7.1 channel speaker set-up as well as four speakers in the ceiling – making a 7.1.4 system.

What we heard was more of a three-dimensional sound that literally wrapped itself around us while still having specific directional sounds from each speaker.

A number of films have been made with a Dolby Atmos soundtrack for the selected public theatres that have the right set-up including The Amazing Spider-Man 2, Godzilla and Guardians of the Galaxy and Oblivion to name a few.

And films will also have the Dolby Atmos soundtrack when they are released on Blu-ray Disc with the first being the latest Transformers: Age of Extinction which hits shelves later this month.

Onkyo has a number of receivers as well as an all-in-one system with Dolby Atmos onboard available to purchase now.

At the top of the line is the Onkyo TX-NR3030 11.2 channel network A/V receiver which has 230W per channel output, seven HDMI inputs and three HDMI outputs.

Priced at $3,999, this high-end receiver is aimed at customers with a serious home theatre set-up.

Customers have the option of installing speakers in the ceiling to create the Dolby Atmos effect but that might not suit all users.

The alternative to overhead speakers are Dolby Atmos enabled floor speakers which have, on top of the usual speaker, an upward firing speaker.

This can create that overhead sound despite being about a metre off the floor because it is reflected off the ceiling and back down to the viewer.

These speakers are included with the Onkyo HT-S7705 5.1.2 system which can be integrated into your existing set-up in your lounge room.

This speaker package, priced at $1,799, includes a receiver and a subwoofer and also has Bluetooth on board to stream your music from your computer and mobile devices.

Now you can hear your favourite movies coming at you from all directions.

Logitech K480 keyboard links to all your devices at once

Jawbone UP Move review – smaller, cheaper but with all the features