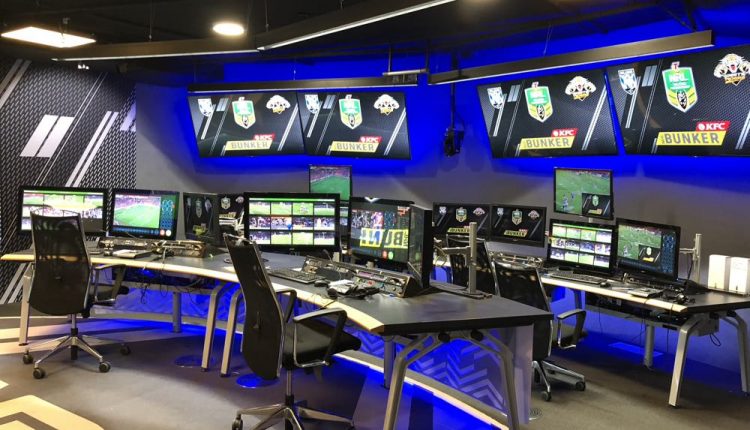 The NRL Bunker plays an essential part in every rugby league match. It is the place where the line-ball calls are decided so it is important for officials to have the latest technology at their fingertips.

Tech Guide was given a behind the scenes tour of the NRL Bunker and the complex hardware and software and also met the operators who make it all work quickly and efficiently.

The idea of the NRL Bunker was conceived in 2012 after a controversial final series which included a contentious decision which ended the North Queensland Cowboys in their semi-final against the Manly Sea Eagles.

At that time, the video referee was a single match official in a box in the grandstand looking at a 32-inch screen trying to come up with the right call while angry fans were pounding on the glass.

“We had to challenge yourselves to say whether or not what we were doing was good enough,” said Nathan McGuirk, NRL general manager for competitions and operations.

“We started to look at what other sports internationally were doing in this space.”

The following year the NRL travelled to New York and Toronto took a look at how major international sports like the NFL and the NHL handled their video adjudication and from that the idea for the NRL Bunker was born.

“From 2014 onwards we started planning this place and looking at how viable it was for us,” McGuirk said.

“We had a lot of technical challenges back then and it was amazing how quickly technology was changing and evolving.”

The facility was actually originally going to be named the Command Centre but it was called the Bunker – a name that NRL CEO Todd Greenberg came up with – and it stuck. 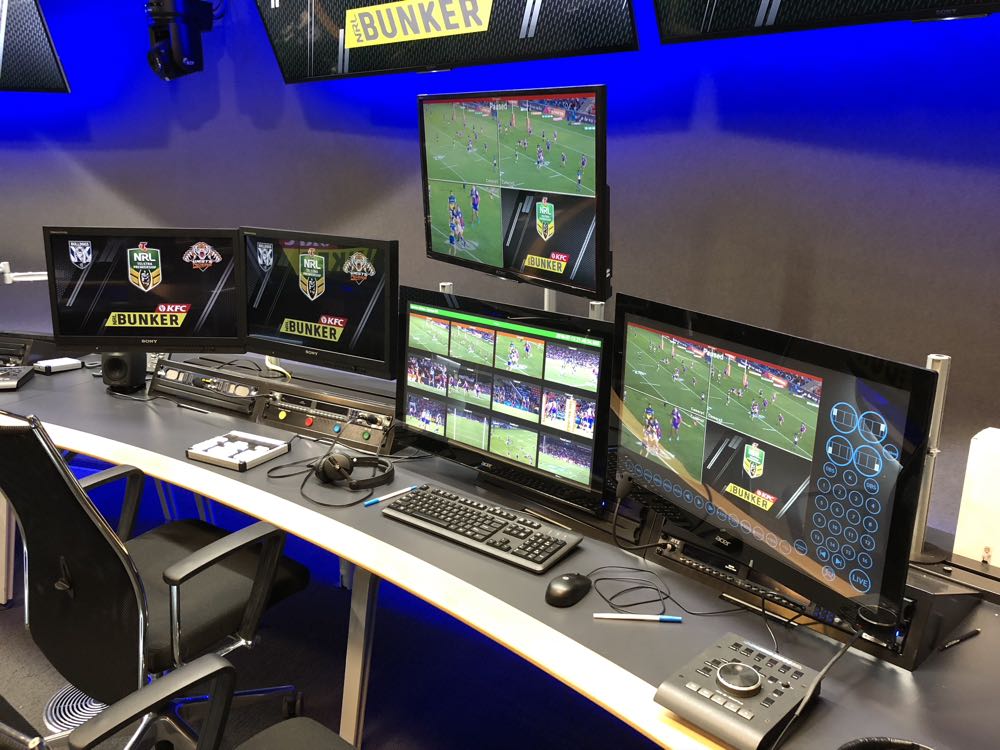 Each station has a jog wheel to control the speed of the vision so they can go as slow as frame by frame.

There are also tag pads that allow the operator tag different points and incidents during a game which can then be quickly referred to again later.

What you can’t see in the large room nestled in Eveleigh are the 20 server racks and 29km of cables that connects everything together.

Coming into the Bunker are 20 HD video feeds from all the venues used for NRL matches.

Review officials have access to up to 20 camera angles with the ability to zoom and split screens to make their decision.

The NRL partnered with NEP Broadcast Solutions to bring the Bunker to reality along with Hawkeye, already familiar to sports fans in cricket and tennis adjudication, to supply the software that runs the system.

On game day, the NRL Bunker is manned by the Senior Review Official (SRO) along with a second match official and an operator who cues up the best angles to make the decision. 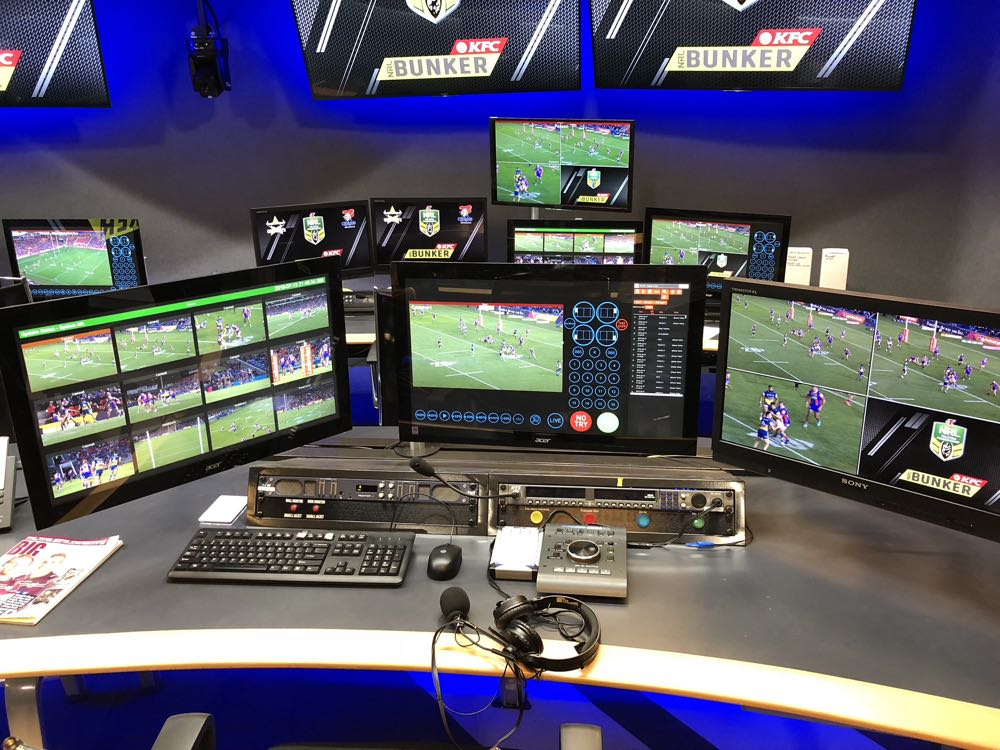 There are four pods inside the Bunker which are rotated for each game. The NRL built it this way to cope with the fact that some NRL games were played at the same time.

Today, NRL matches are played concurrently so there is no overlap and less strain on the Bunker.

In the early days, it took up to 90 seconds for the NRL Bunker to make its decision but with practice and improvements in technology that time has come down to well below a minute.

There have now been more than 1600 decisions made by the NRL Bunker in the two and a half years it has been operating.

The NRL still has the old video referees system, manned by the referees coach, at the ground mainly for coaching purposes but it is also used as a backup for the Bunker. 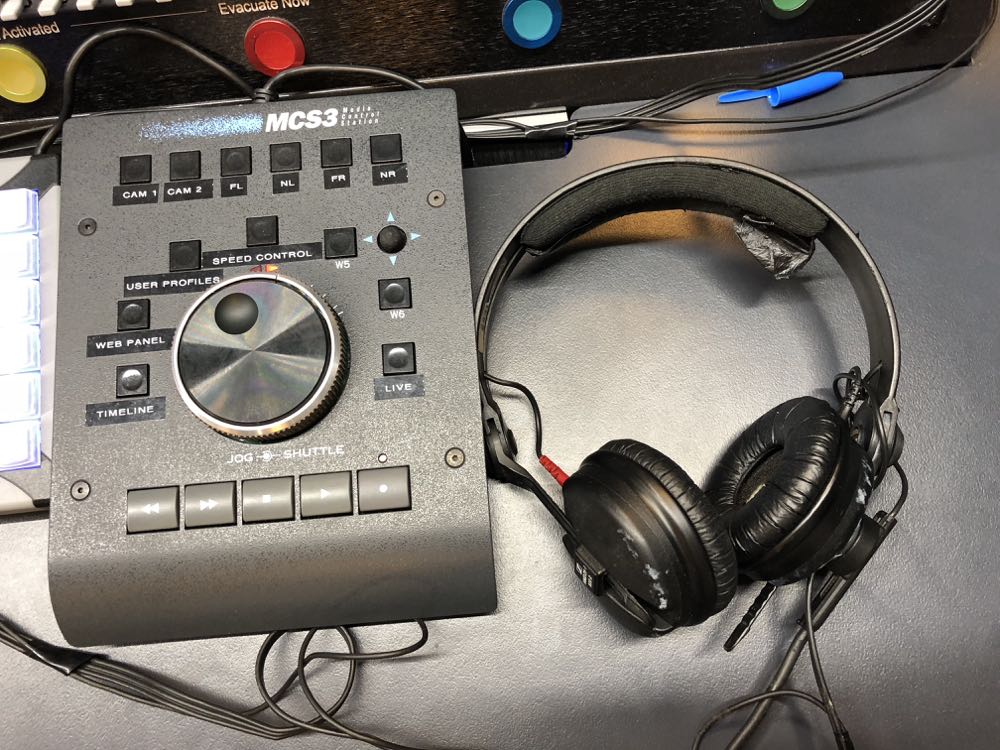 And in all the time only one video decision has been made outside the Bunker, due to a technical issue, by the old video referee system.

The NRL Bunker can be used to help make point-scoring decisions, to review incidents of foul play and to decide on restarts if it is unclear which team forced the ball to go out or over the deadball line.

McGuirk says the NRL Bunker is also surprisingly quiet during a match.

“Everyone is wearing earphones but the guys still have a feel for what’s happening at the match but it’s completely silent here,” he said. 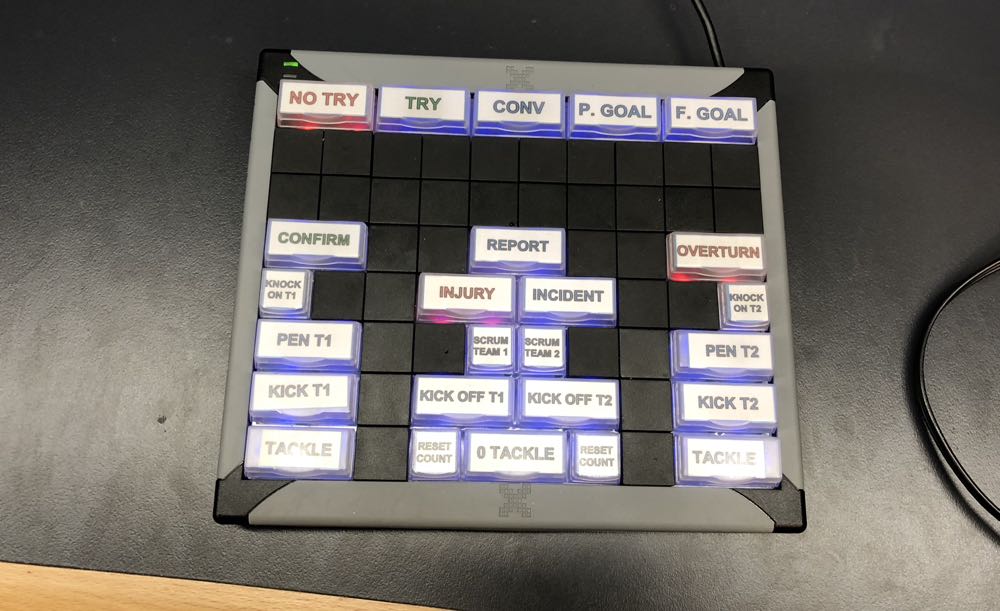 “The environment for the match officials in making the right decisions is essential and it was one of the key things we set for ourselves.”

On the software side, Hawkeye provides the backbone of the system.

“The core of the system allows all of the pitch facing cameras to be brought back to the centralised bunker and kept in sync to allow the referees to make informed decisions as they need to,” says Alex Varnish, Hawkeye general manager in Australasia.

“Many people know us from our presence when were used in the tennis and the cricket but we are also used in a wealth of other sports in a similar capacity.

“Our operators, in conjunction with the NRL officials, need to ensure that they’re checking everything from kick-off through to the final whistle.”

One thing that is critical to the entire set up is synching all the camera angles.

“It’s really important especially for rugby league, you want to know whether there was foot on the line at the same time he’s putting the ball down so if the cameras are not in sync you can make the wrong decision.” 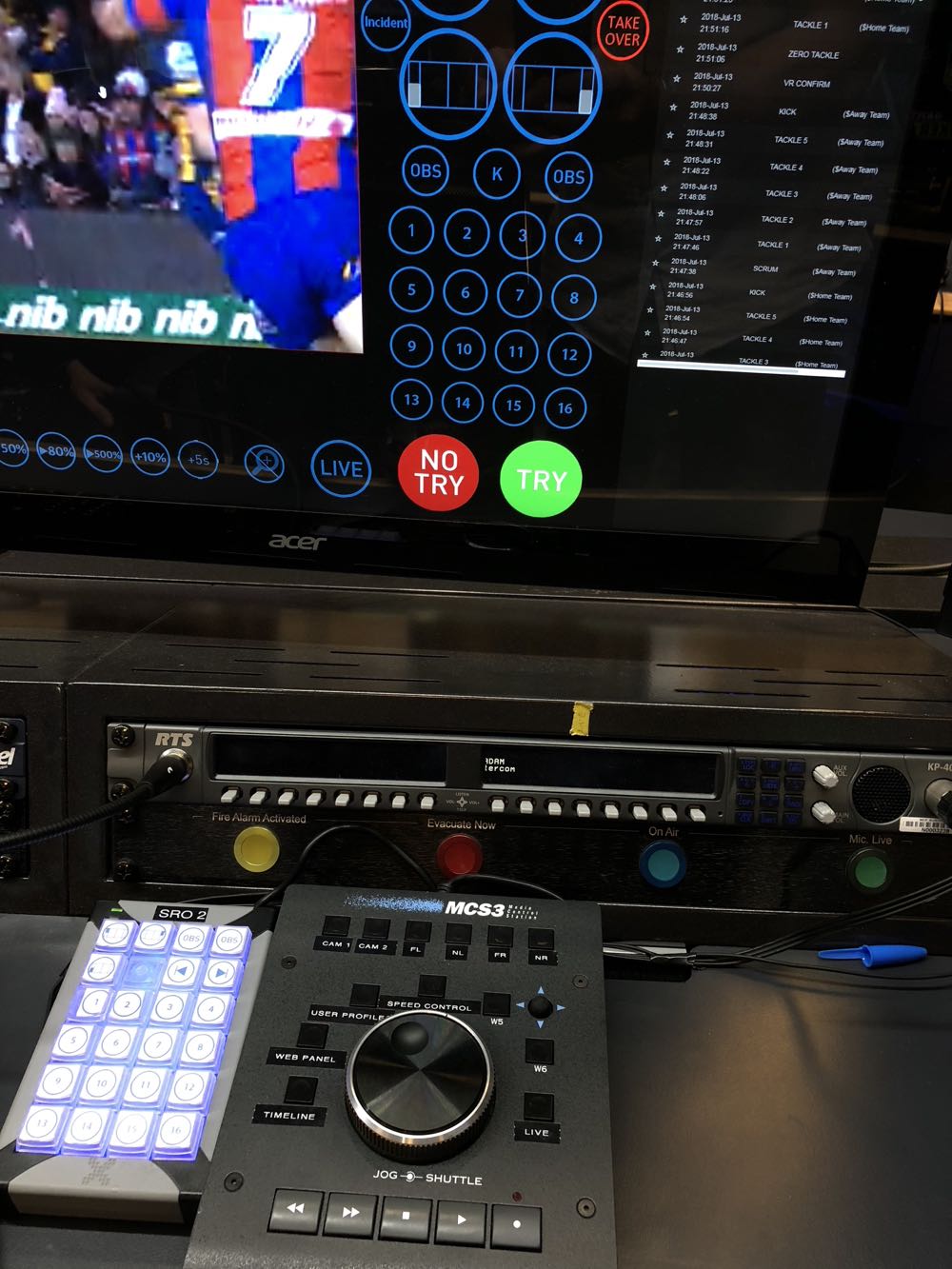 A synch check is performed one and a half hours before the game when all the broadcasters aim every pitch-facing camera on a broadcast individual on the field who will clap his hands above his head.

This will prompt the Hawkeye software to get all the angles in synch at the same time.

Varnish says technology is always improving and updates to the software are always being made. 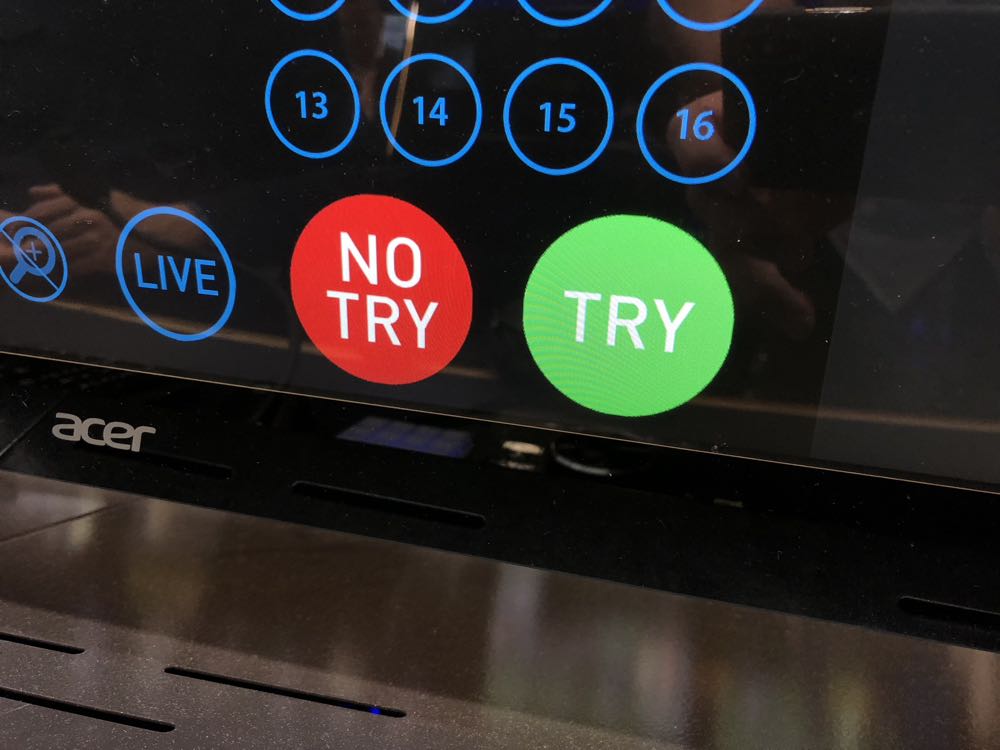 “It’s like what most people would be familiar with at home with their phones with constant software updates,” he said.

“Our software is no different, we’re constantly evolving our software to be best of breed.

“The system has remained relatively similar since the commencement of the 2016 season. “Where we see an evolution is in the process and workflow of the referees and the operator to ensure we’re getting that time down that the decision-making process takes.

“The bunker is a transparent environment, what we’re seeing here and making our decisions around is what you’re seeing at home on Channel 9 or Fox league.”

Want to work in IT? You need CompTIA A+ Certification and these valuable tips to help you pass