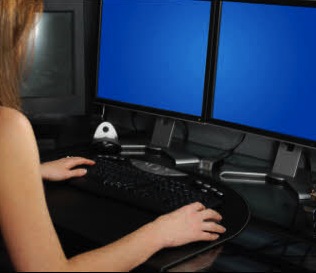 Our computers can be used in so many different ways that there are times when it would help to have more than one screen.

Having that extra screen space can really help productivity, organising files and sorting through digital photos, videos and music.

It can also be helpful to display a number of websites at the same time or even dedicate one screen for email and social networking and the other screen for everything else.

For other professional users like video editors and graphic designers having an extra screen make their jobs even easier.

Whatever the case may be the good news is it’s a relatively easy exercise to add a second screen to your computer whether it’s a PC or a Mac.

Most late model computers have the ability to support two monitors. If you own a PC you can check the back panel of the computer if there are two monitor connections – either two VGA (video graphics array) ports or two DVI (digital visual interface) or one of each.

If not, two monitors are still possible with a video adaptor or by upgrading the video card.

Mac users simply look for the Mini Display port on the back of the computer and, with the help of the right adaptor cable can connect to a VGA or DVI monitor.

iMac users who already enjoy a built-in LED display can now sit a second monitor beside their all-in-one computer.

Similarly laptop users can connect a monitor to either use it to have a larger representation of their screen (mirror view) or as additional space (extended desktop) to work with.

When two screens are connected to extend the desktop the user can move files, open windows and browsers from one screen to the next.

It’s not quite Minority Report but still a lot of fun.

Turn your PC or Mac into a multi-region DVD player

Monitor your pulse wirelessly with myTrek