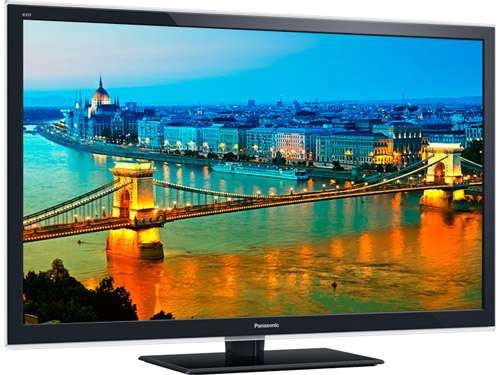 Panasonic, usually known for producing high quality plasma panels, has also made a name for itself with some new LED TVs including the 47-inch Viera TH-L47ET50A.

The LED TV has impressive full high definition 1920 x 1080 resolution in 2D and 3D as well as high quality sound through eight micro speakers built into the silver crystal frame.

The TH-L4ET50A has Ethernet or wireless connectivity and provides access to lots of content along with access to the internet, apps plus it has its very own smart phone app.

Panasonic’s LED TV has a silver frame that is ringed by a transparent edge around the entire bezel.

The frame itself is quite thin so that when the TV is on, the frame almost recedes into the background.

The table top stand is also quite unimposing and gives the appearance that the TV is floating on air. This is because the stem connects from the back of the screen to the back portion of the stand.

The Panasonics’s 47-inch full HD screen has enhanced colour reproduction, high contrast and a feature called IPS (in plane switching) for clear sharp images and with a viewing angle of 178 degrees.

A clear panel filter also part of the screen and works well to cut down external reflections to maintain the picture’s true brightness and colour.

The TH-L47ET50A has built-in wi-fi and is every inch a smart TV and can be used to connect to catch up TV services, surf the web, use apps and access favourite online destinations like Facebook, Twitter, YouTube and Skype (which works with an additional camera accessory).

And with DLNA (digital living network alliance) users can also stream content stored on compatible devices like computers, smartphones and tablets wirelessly to the TV.

It’s also possible to record programs to a USB drive or even an SD card and utilise the TVs built in EPG (electronic program guide).

There also controls on the app that replicate the actual remote including volume, channel up and down and changing the source.

It also provides a keyboard to make typing on the screen even easier when browsing the web or entering text.

Speaking of the web, it’s possible to find a website on the app and then simply flick it upwards towards the TV and, in a few seconds, it appears on the Panasonic’s screen.

You can also do that that with pictures and videos on your smartphone to enjoy them in all of their glory on the 47-inch screen.

The Panasonic might have a lot of added features and connectivity options but it certainly doesn’t do anything to sacrifice the picture quality.

Out of the box we adjusted the backlight, contrast and brightness and preferred the Dynamic mode to give the picture some added warmth and better black levels.

We like the fact that users could go as little or as far as they wanted with fine tuning the image quality.

Blu-rays looks sharp and detailed as did high definition free to air TV.

3D mode is also on board and provided an above average experience.

There were some minor issues with crosstalk (when you can see the left and right image at the same time) which was apparent in the background of some of the 3D movies we watched.

But this was hardly a deal breaker and it still provided a respectable 3D experience with the Panasonic’s lightweight active glasses.

Speaking of glasses, there is only one pair in the box. So if you’ve got a family and want everyone to have their own pair of 3D glasses that’s going to cost you an extra $99 each which is a bit of a downer.

Audio quality is also above average thanks to an 8-train speaker system that is reflected toward the viewer from the edge of the frame.

The Panasonic TH-L47ET50A 47-inch smart TV offers a lot of value and quality in an attractive package.

And although it’s an above average television, the Panasonic’s connectivity makes it a useful and easy way to access outside content and also enjoy your own.