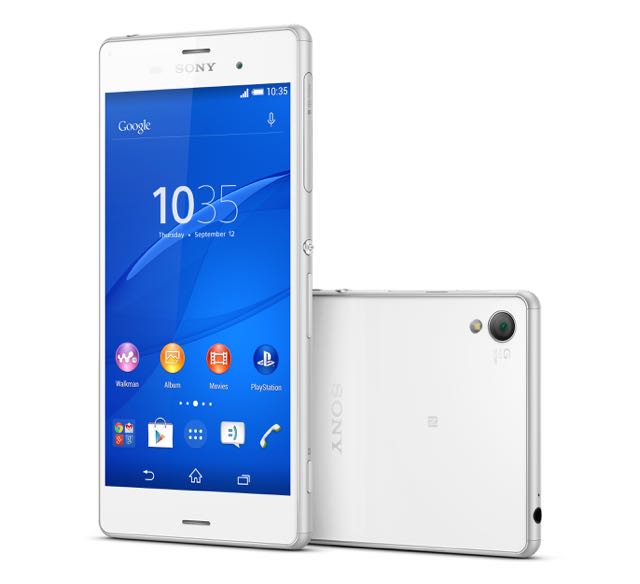 Sony has raised the bar with the release of its premium Xperia Z3 smartphones at IFA that include a long list of top shelf features and head-turning designs.

Sony Xperia Z3 and Z3 compact have a 5.2-inch and 4.6-inch screen respectively.

They have each brought together the best of Sony’s cutting edge achievements including high quality screen technology, enhanced camera sensors, superior audio output, unparalleled gaming and a two-day battery.

And the products also offer the highest waterproof and dustproof rating.

Sony’s goal with this collection of features and abilities is to provide the customer with not just a good experience – but an all-round great experience.

The Sony Xperia Z3 and Z3 Compact each offer the same performance and feature set with the screen size and resolution the only differentiation between the two products to allow greater choice for customers.

The Xperia Z3 has an updated slimmer design at just 7.3mm thick with a more rounded aluminium frame. The device weighs just 152g.

The Z3 compact, which is aimed at customers who don’t want a larger screen and want the option of using the device with one hand, is 8.3mm thick and is a featherweight 129g.

Both smartphones are powered by a quad-core Qualcomm Snapdragon 801 processor running at 2.5Ghz to allow smooth and fast operation and browsing and more immersive graphics.

The screens of the new Xperia Z3 and Z3 Compact includes Sony’s proprietary Triluminos technology that can be found on the company’s stunning line up of Bravia smart TVs for better viewing in any conditions.

The Xperia Z3’s 5.2-inch display has a full HD resolution while the Z3 Compact has a 720p display.

On the camera side, users will find a 20.7-megapixel sensor and 25mm G Lens with the Exmor RS sensor designed for mobile to allow for superior pictures even in low light conditions.

As a camcorder, the Z3 and Z3 Compact can also capture 4K video which is four times the resolution of full HD.

The camera also has a number of social features including Multi-Camera which can pair up to three Xperia devices to capture video from several angles at the same time.

Sony has brought its audio expertise into the new smartphones as well with DSEE HX technology onboard to upscale the quality of your MP3 and AAC music files to near high-resolution quality.

Also onboard the new Xperia devices is noise-cancelling capabilities which can reduce outside noise by up to 98 per cent when paired with Sony’s MDR-NC31EM digital noise cancelling headset.

Gamers will also be excited to learn the Xperia devices also have PS4 Remote Play functionality which allows users to stream a game from their PlayStation 4 console and play it on the smartphone’s screen with the PS4 controller.

So if the TV is being used and you still want to play your latest game – PS4 Remote Play comes to the rescue for you to use with the Xperia Z3 and Z3 compact anywhere on your home network.

The Xperia Z3 and Z3 Compact also boast the longest lasting batteries on the market with the company claiming two days of use on a single charge.