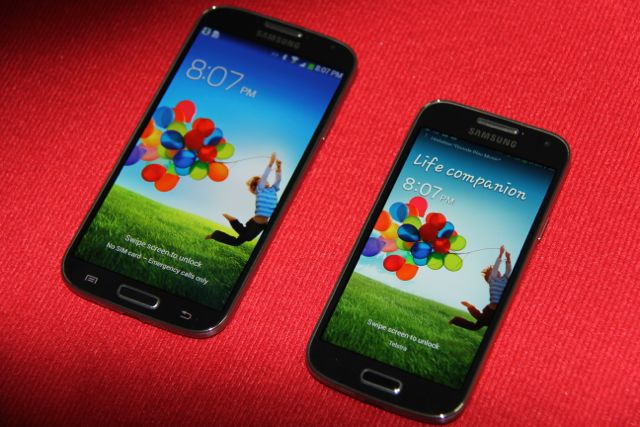 Samsung has downsized the bestselling Galaxy S4 to a size to make it an option for users looking for a similar product without the bulk of a larger screen.

The Galaxy S4 Mini has a 4.3-inch screen – down from its big brother’s display size of 5-inches.

And even with a 4.3-inch display, the S4 Mini still outsizes the screen on the iPhone 5 despite the Samsung product being a few millimetres shorter than Apple’s device.

The Samsung Galaxy S4 Mini is truly just a shrunken down version of the Galaxy S4.

Anyone who has ever complained the Galaxy S4’s screen is too big for them now have no other excuses.

The S4 Mini is a comfortable size that has inherited most of the larger S4’s attractive features.

The S4 Mini has a rounded back panel that feels good in your hand and comfortable to hold.

Volume up/down is on the left, on/off/lock button is on the right while the headphone jack is on the top edge and the microUSB charge port is on the bottom.

The back panel is also easily removable so users can get easy access to the sim card slot, the microSD card to expand the device’s 8GB internal memory and, of course, the battery.

While the S4 Mini has most of the features of the Galaxy S4 the obvious difference is not only screen size but also screen quality.

The shape of the screen is long and narrow and still offers plenty of room for apps, comfortable web browsing and email.

It has a dual-core 1.7Ghz processor so it is quite fast and responsive and also packs in 1.5GB RAM.

It also has an 8-megapixel camera and a 1.9-megapixel front-facing camera. Not the 13-megapixel shooter you’ll find on the Galaxy S4 but certainly no slouch.

And there are most of the same camera features and modes including beauty shot, best photo, burst mode and panorama.

And all of your favourite apps and features can also be found aboard the Galaxy S4 Mini.

These include S Translator (translating app), S Voice (for voice control), Smart Stay (which can pause a video when you look away from the screen) along with Group Play (to sync multiple devices to play the same song).

Not all of the gesture controls seen on the Galaxy S4 have made their way to the S4 Mini.

Air Gestures is one omission but there is still motion control where you can call a contact simply by moving the device to your ear along with palm motion that lets you mute incoming calls and pause media by touching the screen with your palm.

The device is satisfyingly fast thanks to the 1.7Ghz dual-core processor so getting to the various features on board and to your favourite apps happens almost instantly.

On the battery side, the S4 Mini is more than up to the job even for heavy users.

We easily got more than a day’s usage on a single charge.

The onboard 1900mAh battery might be smaller than the one aboard the Galaxy S4 but is does have a smaller screen to power so the differences almost cancel each other out.

Samsung’s Galaxy S4 is one of the most popular smartphones on the market and it was a clever move to offer a smaller version to give the model every opportunity in this competitive market.

The result is the S4 Mini which would have to be one of the capable devices in this size.

It has the power and features of its big brother but in a smaller convenient form factor.

The Samsung Galaxy S4 Mini is available now from Mobicity.