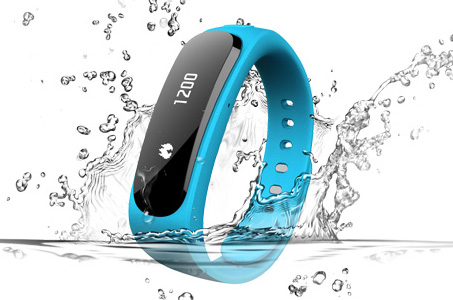 Huawei has revealed a new range of devices at the Mobile World Congress including a 7-inch and 8-inch tablet, an activity tracker smartwatch and a 4.5-inch smartphone.

Huawei kicked off the show by revealing the new 7-inch MediaPad X1 “phablet”, the 8-inch MediaPad M1 tablet, the TalkBand B1 and the Ascend G6 4.5-inch 4G smartphone.

The MediaPad X1 has a 7-inch display and is part smartphone and part tablet with 4G/LTE connectivity.

Constructed from an aluminium unibody, the MediaPad X1 weighs in at 239g and is just 7.19mm thick making it the world’s thinnest 7-inch 4G phablet (phone-tablet).

Its device has a 7-inch 10-point capacitive touch display with a full high definition resolution.

On the battery side Huawei says the device can run for five days between charges thanks to the onboard 5000mAh lithium polymer cell.

The MediaPad M1 tablet has an 8-inch IPS (in-plane switching) screen with a resolution of 1200 x 800 along with dual front-facing speakers and dual microphones for enhanced sound quality.

Like the MediaPad X1, the M1 has 4G/LTE connectivity and also features an AirSharing function which allows users to wirelessly share their screen and transfer images via cloud photo sharing.

The Huawei TalkBand B1 is part activity tracker and part smartwatch and is a companion device to the MediaPad X1 phablet.

The product is a fashionable bracelet made from sweat-resistant and anti-UV materials so it doesn’t fade or age.

It links to the X1 using Bluetooth 4.1 for wireless calling and activity tracking.

The TalkBand B1 can also support wireless calling on other devices running Android 2.3 and higher and iPhones running iOS 5 and above.

A small earpiece weighing just 9.4g sits securely within the band and is easily removable when needed.

There are also vibration alerts if the device is separated from your smartphone by more than 10 metres.

The Ascend G6 smartphone has a 4.5-inch qHD screen and 5-megapixel front-facing camera so you can take even higher quality selfies.

The 4G LTE device is 7.85mm thick and weighs just 115g and will be available in a range of colours when it is released in April.

LCD display quality of the G6 is 245ppi (pixels per inch) which offers a brighter and sharper experience.

There is also an 8-megapixel rear-facing camera, a 1.2Ghz quad-core processor and a new Emotion 2.0 UI (user interface).

Huawei’s MediaPad X1, MediaPad M1 and TalkBand B1 will be released next month.