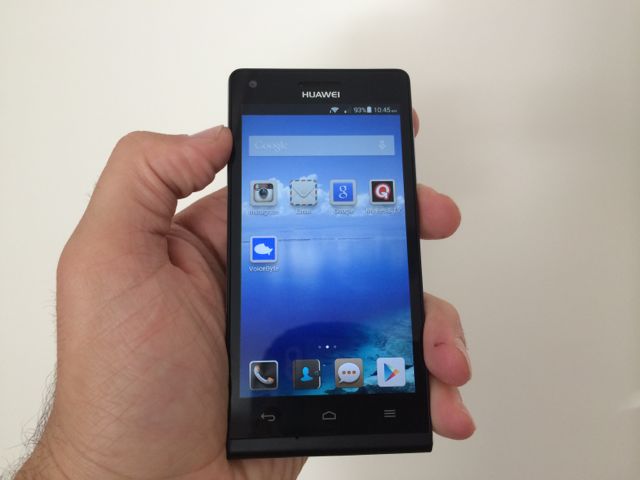 Huawei might not be as well known as Apple and Samsung in the smartphone market but it has released some quality devices including its latest Ascend G6.

The company has made a habit of delivering quality devices that are loaded with features but with an affordable price.

The Ascend G6 continues this tradition and features a slick design, impressive cameras and the Emotion UI (user interface).

Huawei’s Ascend G6 is slim and light – 7.5mm thick and 115g – and has silver edging along the top and sides with a curved bottom edge.

Unlike some other larger screen smartphones in the market, the Ascend A6 fits nicely in your hand.

It has a screen that’s big enough to enjoy your content but still small enough to operate with one hand.

In fact, it’s not much bigger in length and width to the iPhone but has a screen that’s half an inch bigger.

It has a detachable back cover so you can insert a SIM card and microSD card. The battery can be seen but cannot be removed.

The Ascend G6 has 4G connectivity so you’ll have a fast connection to your content and with all of your apps.

One of the first thing users will notice is the Emotion 2.0 UI (users interface) which sits on top of the Android operating system.

It allows users to choose a home screen style – the standard style with apps scattered across several screen or the simple style which has self explanatory tiles to link you to the appropriate apps.

In the standard style users can customise their screens with widgets and other shortcuts.

But we did find it odd that there was no simple way to access all of your apps in one place.

Usually on Android there is a shortcut that brings you to scrollable screen of all of your apps – don’t even look for that on the Ascend G6.

The closest we found was in Simple Mode when you click on the Others tile to reveal all of the installed apps in one place.

If you like taking pictures with your smartphone and also snapping the odd selfie you will find a friend in the Ascend G6.

The main camera on the back has 8-megapixel resolution which produces excellent images.

And if you want to take a selfie either on your own, with a friend or celebrity or in front of a landmark the the Ascend A6 has one of the best front-facing cameras to help you with all of that.

First up it is a 5-megapixel camera so it’s much better quality than most other front-facing cameras.

There’s also a 10-level auto face enhancement function so you’ll be looking your best in any picture you share.

It’s got an 88 degree wide angle lens so you can easily fit your friends in the picture or any other landmark on your travels.

There’s even a preview window that tell you where to look – most make the mistake of looking at themselves on the screen rather than into the lens – and also has a countdown before snapping your picture.

Also on board is a Phone Manager which can run diagnostic checks of the Ascend G6 and suggest ways to keep the device running in peak condition like emptying the trash and turning off apps running in the background to save power.

The Huawei Ascend G6 is powered by Qualcomm MSM 1.2Ghz quad-core processor and has Android Jelly Bean version 4.3 of the operating system.

Performance is responsive and fast whether you’re browsing the web, watching content or playing a game.

On the connectivity side there is 802.11n, Bluetooth 4.0 and also has screen mirroring so you can share whatever is on the Ascend G6’s screen onto your connected smart TV.

The 2000mAh battery onboard is also a workhorse and you’ll easily cruise through a full day and well into the next before you need to plug in the charger again.

The Huawei Ascend G6 is a device that offers great design, a range of useful features and excellent value.

Huawei might not have the same brand strength of Apple and Samsung but it has still managed to produce a device that challenges its fancied rivals at a fraction of the price.