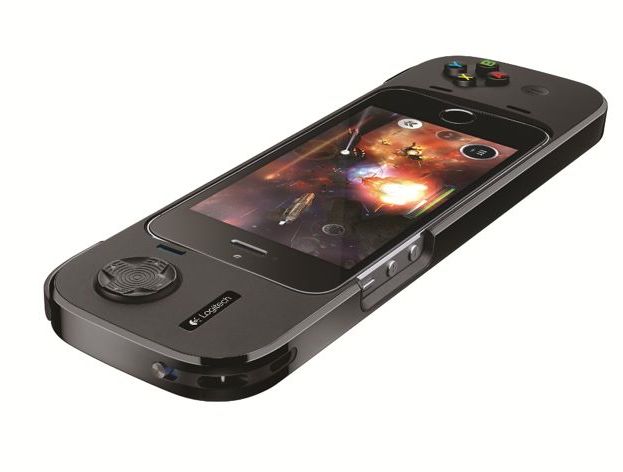 Logitech has introduced a new device that will turn your iPhone into a mobile gaming console complete with physical controls and a back-up battery.

The Logitech Powershell Controller and Battery fits an iPhone 5, iPhone 5s or iPod Touch Fifth Generation snugly inside like a standard case.

There is also a built-in Lightning connector which connects the iPhone or iPod to the device when playing controller-compatible games.

And there is a growing list of game apps that can work with the Logitech Powershell like flying, shooting and driving games that are not usually as easy to play on a touchscreen.

These include Bastion, Fast and Furious 6: The Game, MetalStorm Aces, Galaxy On Fire 2 HD and Nitro.

By adding physical controls, the Logitech Powershell allows players to get their hands away the screen to enjoy the entire image.

And the tactile controls, including a D-Pad, shoulder triggers and face buttons, improve gameplay to make the experience more like a console game.

Thank to the excellent graphics and the processing power of the iPhone, the quality of games has improved dramatically and Logitech’s Powershell takes that even further by adding physical controls.

When the iPhone is sitting inside the device, users are still also able to access all of the buttons including volume and the lock key.

There is also an opening for the camera and flash and an audio extension adaptor lets you still plug in headphones so you won’t have disturb others with the sound of the game.

But the Logitech product isn’t called the Powershell for nothing. Also onboard is a 1500mAh battery that can recharge your iPhone on the go.

If you plug-in the Powershell while the iPhone or iPod is still inside you can charge both the Logitech device and the mobile device as well.

The Logitech Powershell Controller and Battery will be available from mid-December at the Apple Online Store and Apple Retail Stores and will be priced at $129.95.

Mobile calls during flights may soon be allowed