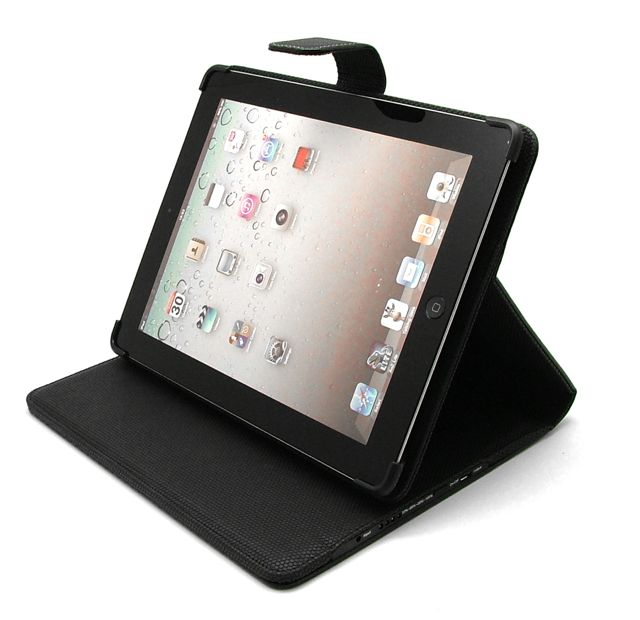 This product, from Padacs, wraps a faux-leather cover around a case purpose-built to fit the new iPad and in the lid of the case there is a 5.5mm-thick, 6800mAh Li-ion battery that, fully juiced, can transfer a very useful charge to the iPad.

Putting it to the test comprised two scenarios. The first, charging the iPad while it was continually in use. Second, charging an iPad when not in use.

In the first instance, I ran the iPad flat by looping a feature movie with Wi-Fi turned on, which lasted almost 11 hours.

Once the iPad’s battery gave out, I connected the sync cable to the adaptor required to connect to the charging case and continued using the iPad as described.

The iPad’s battery recharges slowly and this presented a bit of a problem because with Wi-Fi on and the movie playing, the iPad sucked more charge than the charger could keep up with and after an hour the iPad shut down again, requiring about 15 minutes before the iPad was again usable.

This repeated itself twice. Of course, turning Wi-Fi off alleviates this problem somewhat.

Recharging the new iPad 3 that was not in use revived the iPad’s charge from 0 per cent to 40 per cent.

This provided five to seven hours charge time depending on usage. This sits fairly well with the maker’s claim of extending the new iPad’s battery life by 50 percent. PADACS also claims the Enduro can extend an iPad 2’s battery life by 75 per cent.

Based on these results, it’s clear the charging case would have a practical use for anyone putting their iPads under a heavy load while distanced from a power supply, or even for people who just like the idea of a back-up charge.

Nothing worse than settling in with a latté at your favourite café only to have your iPad die on you, right?

On pure practical terms, the PADACS case scores well but what about looks?

On this count, the case scores well, too. The outer has a genuine leather feel and the stitching is quality work.

The rubberised inner material provides a solid grip when the case is folded out for handheld use of the iPad and will hold the iPad in place at an adjustable angle for hands-free viewing.

The corner clips can be a minor struggle to lock into place. The trick is to slip a finger behind the clip for some resistance rather than just apply pressure to the corner of the iPad’s screen.

On the side of the case are an on/off button for initiating a charge transfer, four LEDs that indicate charge level and an input for getting juice into the Enduro.

There’s no power supply shipped with the Enduro. I charged it from a computer USB port, which took about about five hours from entirely flat to fully charged.

Because the Enduro has a USB adaptor, you can use it to charge any device that syphons power over USB, so it’s good for iPhones and other devices. This adds appeal but be sure you keep that adaptor in a safe place. Without it, the Enduro is useless.

Weight-wise, the Enduro adds 623gm to your load, which I suspect would be barely noticeable for most people.

Bulk-wise, the case is 30mm thick with iPad inside, which for some people may necessitate re-packing their shoulder bag or briefcase but, given the benefit on offer, that’s really not a big ask.

* Chris Oaten is a professional photographer, and gadget reviewer, from Insight Visuals.

EasyPay app allows customers to serve themselves in Apple Stores