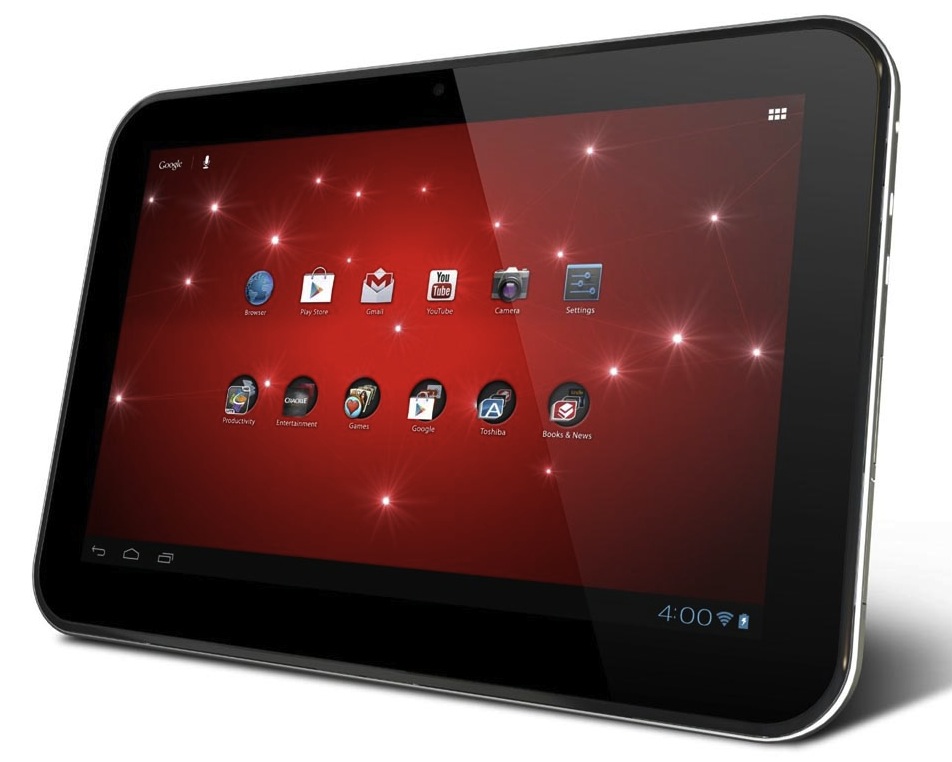 Toshiba has released a family of new tablets ranging in size from 7.7 inches to a massive 13.3 inches to suit a wide range of consumers.

There are three tablets in the line-up and all running the latest Android 4.0 Ice Cream Sandwich operating system.

The smallest device in the Toshiba tablet family has a sharp 7.7-inch AMOLED screen and has the same resolution – 1280 x 800 – as its 10-inch big brother.

The device has a silver finish and is small enough to hold comfortably in one hand so its ideal for reading ebooks.

Under the hood is an NVIDIA Tegra T30SL processor with 1GB RAM and 16GB storage. Memory can be expanded with the built-in microSD card slot.

There is a 5 megapixel camera on the rear and a 2 megapixel front-facing camera and battery life is rated at eight hours on a full charge.

For those who want to move up to a larger screen, there’s the AT300 with a 10.1-inch display which has automatic brightness control.

This larger screen allows the device to be used as a productivity tool whether you’re in the office or on the go.

But the device also works just as well for relaxing with the 16:10 aspect ratio perfect for movies and web browsing.

The AT300 is a larger version of the AT270 with the same screen resolution, same cameras, RAM and internal memory. And like the AT270, the AT300 has an expandable microSD card slot.

What the AT300 adds is a micro HDMI port and has the same eight hour battery life.

The big daddy of the Toshiba range is the AT330 with a massive 13.3-inch screen – making it the biggest tablet on the market.

The 16:9 aspect ratio cinematic screen has a resolution of 1600 x 900 and offers plenty of room for any task – work or play.

It is powered by the NVIDIA Tegra T30S processor and has a full size SD card slot and Bluetooth 3.0.

The AT330, like all of the Toshiba tablets, has a Corning Gorilla Glass display and sturdy aluminium construction to handle the day-to-day usage.