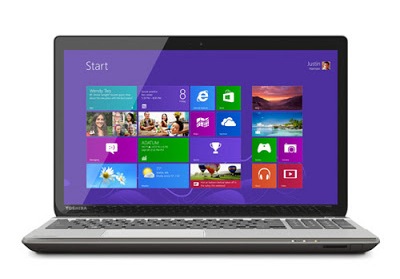 Toshiba’s Satellite P50t is a laptop designed for the user who wants all of the features of their desktop computer with them on the go.

Priced at $1,999, the device has a generous 15.6-inch full high definition touchscreen display with plenty of connectivity options and a Blu-ray Disc optical drive.

Designed as much for entertainment as it is for work, the Satellite P50t is running Windows 8 with an Intel fourth generation Core i7 processor and 16GB RAM.

The Toshiba Satellite has a silver brushed aluminium lid with rounded edges and corners with a textured dark brown base.

Along the left side are two USB ports and an Ethernet port and the Blu-ray Disc optical drive tray while on the right you’ll find two USB 3.0 ports, HDMI and VGA ports along with headphone jack and microphone input.

This is a fully featured laptop – not an ultrabook – and needs some size to fit in its long list of features.

Those expecting a svelte and lightweight machine might be disappointed with the Satellite P50t’s dimensions. It weighs 2.4kg and is more than 3cm thick.

But those looking for a fully featured all-round laptop won’t mind these generous proportions.

When you open up the lid you’re greeted with not only a full size keyboard with good-sized keys but also a full number pad on the right side.

Above the keyboard and running the full width of the products are built-in Harman Kardon speakers.

The trackpad is also a good size and centred below the regular keyboard which makes it off to the left of the device.

The 15.6-inch touchscreen is sharp, bright and also quite glossy. That gloss will be its best feature indoors but makes it fairly reflective in brighter environments.

We suspect a laptop of this size will be used mainly indoors as it’s quite a commitment to carry around so the reflection of the screen would only ever be a minor annoyance.

And when it is inside the screen looks gorgeous whether you’re browsing the web, your own content, playing a game or watching a movie in full high definition.

The Toshiba Satellite P50t is powered by the Intel fourth generation Core i7 4700QM processor running at 2.4Ghz and also has an nVIDIA GeForce GT 745M graphics processor.

It also helps with speedy boot ups – the Satellite P50t takes only about 15 seconds to start up.

Performance is impressive but, unlike Ultrabooks which have complete SSD storage, the Satellite P50t is slightly slower because it’s using a mechanical hard drive but this is hardly a deal breaker. Performance is still above average.

One feature designed to stop the hard drive and park the heads for protection if it detects sudden movement, was also often visible even when just picking the device up off a table. The sensitivity can be adjusted in the settings so it doesn’t become a nuisance.

The full high definition display is impressive and a good size for work or play.

There’s enough screen real estate for a browser and a spreadsheet and, when all the work’s done, is great for watching movies and playing games.

Movies can be viewed in all of their high definition glory thanks to the internal Blu-ray Disc optical drive.

We had to remind ourselves that the display was also a touch screen and this was handy when navigating the Windows 8 live tiles on the home screen.

There are some operations which are still best left to the mouse because the buttons were too small for our fat fingers.

The downside of having a touchscreen though is fingerprints on the screen. It’s a handy feature to have to give users that added interactive option.

But extended periods of use touching a screen that’s at a steep angle – the screen can only extend back just past the perpendicular and not completely flat – means it will make your arm tired from holding it in the air for too long.

There’s a version of the Satellite available without a touchscreen that’s significantly cheaper ($1,299).

Audio is very impressive thanks to the built-in Harman Kardon speakers and they make a great companion to the Blu-ray drive making the Satellite P50t a portable home theatre system as well as a powerful laptop.

Battery life is about three hours so this is a machine that’s not designed as a workhorse you’d take with you everywhere you went.

Its size and weight shows it’s designed to be a device you’d use at home or as a desktop replacement so having a shorter battery life is not going to inconvenience the users it’s aimed at because there will always be a power point nearby.

The Toshiba Satellite P50t is a high quality all-round laptop computer that will give users an excellent experience whether it’s used for work or play.

The Satellite P50t’s long list of features and abilities will make it a popular choice for users who don’t want to compromise any part of their computing experience.