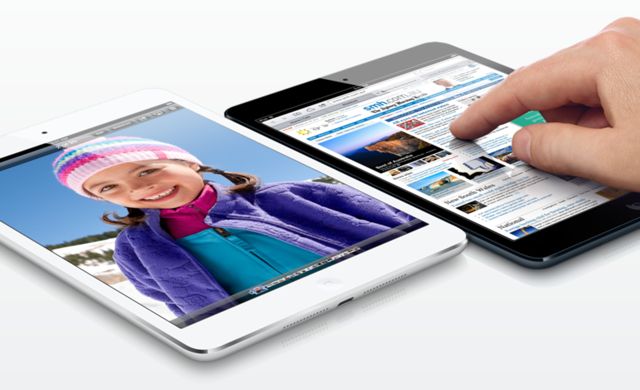 The iPad Mini packs all of the things users love about the regular iPad into a smaller, more convenient form factor that fits in one hand or in the back pocket of our jeans.

To many the iPad Mini will be the “just right” solution with that familiar look and feel that made larger iPad a smash hit.

But don’t think the smaller size means an inferior performance. As Apple said in its introductory video for the new device – it’s every inch an iPad.

And after using the iPad Mini 64GB wi-fi only model for a week now we’d have to concur.

In fact it has an identical screen resolution and the same processor as that of the iPad 2.

And most importantly all of the iPad apps – and there’s now more than 275,000 of them – will all working perfectly on the iPad Mini’s 7.9-inch screen without the need for scaling up or down.

The iPad Mini has taken more of a design cue from the recently released iPhone 5 than with the larger iPad.

It has the same diamond cut edge as the iPhone 5 as well as the same colour scheme – black/slate and white/silver.

The rear panel is made of anodised aluminium – the same material used for the MacBook.

But of course it still has much of the iPad’s DNA and has not been just shrunken down, but rather designed from its own drawing board to fit in the features we know and love about iPad into a smaller device.

The device feels good in your hands and the first time you hold it you’re pleasantly surprised by how thin and light it is.

This size will really appeal to users who like to read books on their iPad. The iPad Mini is almost the same size as a normal book and the fact it can be held easily in one hand will make it a compelling reading device.

One major design departure with the iPad Mini is the frame that fits around the device’s screen. Rather than being the same thickness all the way around like the larger iPad, the iPad Mini’s frame is greatly reduced on either side of the screen.

This clever design decision means the overall size of the iPad Mini is reduced while at the same time having a relatively large screen.

The first word that comes to mind when viewing the smaller size and lighter weight is convenience.

While you have all of the iPad features on board, the iPad Mini is small enough to grip in one hand. And with the reduced weight and thickness it’s no harder to hold than a light notepad.

One thing that stops users taking the 9.7-inch iPad anywhere with them is the size. But with the iPad Mini that barrier has been taken away.

In fact, the iPad Mini fits in the back pocket of our jeans and even inside a sports jacket pocket.

The iPad Mini’s screen is a standout and, despite not being Retina Display like the iPhone 5 and the 9.7-inch iPad, still offers a respectable resolution of 1024 x 768.

That’s the exact same resolution as the 9.7-inch screen of the iPad 2.

But because the iPad Mini fits in the same number of pixels in a smaller 7.9-inch screen it is quite bright and sharp.

The touchscreen of the iPad Mini has the same responsiveness of the larger iPad so moving between apps, surfing the web, reading a book and using an app provides an identical experience.

The dimensions of the screen and the scale of the icons in relation to the size of display is the same as the regular iPad.

So while the actual icons are smaller it is still easy to navigate through your various apps and menu items.

The shape of the screen also provides plenty of real estate when it comes to viewing web pages, using apps, using email and reading iBooks.

And even when tilted over in landscape mode the screen’s shape still provides a generous window to view web pages, movies and apps.

One of the most important things about the iPad Mini is the fact that all of the app designed for the larger iPad will still work perfectly on the smaller device.

With more than 275,000 apps for iPad available it was critical that each and every app scales perfectly to the screen. Apple’s choice of a 7.9-inch screen with a 1024 x 768 resolution ensured this would be the case.

The last thing Apple wanted to do was make it harder for developers to create exciting apps for the iOS platform.

So it’s business as usual for developers and there’s no need to develop new apps or adjust existing apps for another screen size.

Apple knows exactly where its strengths are and this is proven by the fact that the iPad Mini slots into the iPad family with the identical ability to run all of the apps.

All of the biggies like Angry Birds, Fruit Ninja, Facebook, Twitter, Real Racing and many, many others are all equally, playable, useful and enjoyable on the iPad Mini.

The iPad Mini had the identical A5 processor as the iPad 2 which is no slouch by any means.

The device’s smooth performance when opening apps, switching to other apps as well as playing games and movies is the result of the A5’s combined speed and graphics performance.

It should also take some of the credit for the iPad Mini’s excellent battery performance because of its power efficiency.

The A5’s excellent performance also shone through when doing things like editing movies and photos.

Using your 9.7-inch iPad as a camera is viewed by many as strange when holding up this large device to capture an image or a video. It does the trick but just looks odd.

Now the smaller iPad Mini has made the practice of capturing pictures and videos much less incongruous.

On board the iPad Mini is a FaceTime HD camera which is ideal for making FaceTime video calls between other iOS devices and Mac computers.

The 7.9-inch screen gives you a great view of the friend or family member you’re talking to.

And with the iPad Mini a convenient size to carry anywhere with you, it means you can capture those memorable moments with the 5 megapixel rear camera which is also capable of recording 1080p full high definition video as well.

The 7.9-inch screen is quite the viewfinder so framing your shots is very easy.

There’s also automatic video stabilisation on board so your videos are going to look pretty smooth as well.

The iPad Mini has inherited the same smaller Lightning dock connector that was first seen with the iPhone 5.

The connector is 80 per cent smaller and reversible so, unlike the old 30-pin dock connector, it doesn’t matter how you connect the cable.

The battery performance of the iPad has always been one of its star features and the iPad Mini is no exception.

We were using the wi-fi only iPad Mini so there was no 4G radio impacting the battery but we were still amazed by the performance.

The iPad Mini easily got through the 10-hour battery life listed by Apple and that was with constant use and with wi-fi switched on the entire time.

Speaking of wi-fi, the iPad Mini has an advanced wi-fi radio with dual band support over 2.4Ghz and 5Ghz and with a channel bonding feature that results in noticeably faster connections and downloads.

It wouldn’t be an iPad without a Smart Cover and the iPad Mini also has a mini Smart Cover.

The magnetic hinge of the iPad Mini smart cover is covered in the same coloured material as the rest of the cover.

It snaps into place just as easily to protect the screen and also puts the screen to sleep when it closes and then wakes it again when it’s opened.

The smaller Smart Cover for the iPad Mini, which is available in several colours, also folds into a stand for typing or viewing as well.

A Retina Display on the iPad Mini would have been a knockout but it would have also added significantly to the cost of the device.

But if it’s a Retina Display customers really want, they can choose the iPhone 4S or iPhone 5, the iPod Touch or the larger fourth generation iPad.

Apple has priced the device quite aggressively with the entry level iPad Mini – the 16GB wi-fi only model – priced at $369.

Not bad when you consider the iPod Touch fifth generation is priced at $329 but with more memory (32GB) and a 4-inch Retina Display.

The iPad Mini is also $170 cheaper than the 9.7-inch iPad with Retina Display across all configurations.

Apple has created a compelling new product with the iPad Mini that manages to fit all of the killer features of the larger iPad into a smaller, attractive chassis.

The iPad Mini will offer a size many customers have been looking for – bigger than an iPhone but not as large as the regular iPad.

So those people who’ve been holding buying an iPad for that reason now have every reason to buy the iPad Mini.

How 20th Century Fox converted I, Robot from 2D to 3D