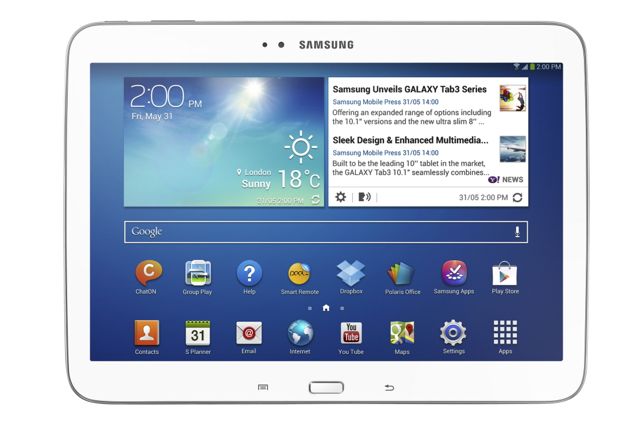 Samsung has released even more tablet devices – this time it’s the Galaxy Tab 3 which will be available this month in two sizes – 8-inch and 10.1-inch.

And this follows the Galaxy Tab 3 7-inch version which was unveiled by Samsung in late April.

The Galaxy Tab 3 have had a significant design refresh that bring them more into line with the look of the Galaxy S III and Galaxy S4 smartphones.

These changes include thinner bezels to maximise screen presence and thinner and lighter designs.

The new Samsung 8-inch and 10.1-inch products are running the latest Android 4.2 Jelly Bean operating system and will be available in wi-fi and 4G/LTE versions

Designed to be used for work and play, the Samsung Galaxy Tab 3 10.1-inch has an impressive look and equally impressive speed and responsiveness.

It is powered by the Intel Atom Z2560 1.6Ghz dual-core processor and comes with either 16GB or 32GB capacities which can be expanded further with a microSD card up to 32GB in capacity.

It can also be used to control your home entertainment system thanks to the Smart Remote capabilities as well as interact with the latest Samsung smart TVs and provide exciting second screen experiences.

The device is small enough to hold comfortably in one hand so users can enjoy a variety of uses from reading ebooks, browsing the web and email and using their favourite apps.

The device weighs 314g and is just 7.4mm thick and is available in 16GB and 32GB versions which is expandable with the microSD card slot.

Under the hood is a 1.5Ghz dual core processor with the device also including a 5-megapixel rear camera and a 1.3-megapixel front facing camera.

Pricing has yet to be officially announced with availability in the first half of June.