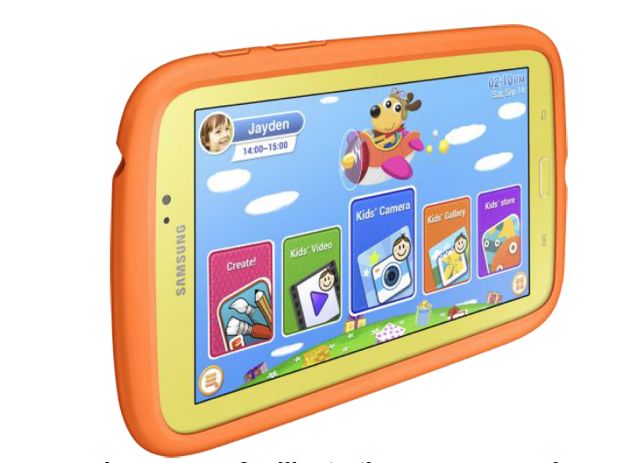 Samsung has released a tablet device aimed specifically at children with user settings for kids along with a standard mode for adults.

The Samsung Galaxy Tab 3 Kids has a 7-inch screen, a bright yellow bezel and a bright orange rubber casing for easier gripping in the smaller hands of a child.

The device is aimed at providing children with a range of apps and specific content that has been designed to both entertain and educate.

It is the first device Samsung has ever released in Australia that is aimed at a particular age group.

The device has a 3-megapixel rear camera and a 1.3-megapixel front-facing camera. It has a 1.2Ghz dual core processor and weighs 302g.

Galaxy Tab 3 Kids is preloaded with content and apps but users can access even more through a new app service called the Kids Store.

Also on board the device are parental controls which include a Time Management setting that can allow mums and dads to set time limits on the use of the device.

When the time limit is reached on the Galaxy Tab 3 Kids, a lock screen appears which requires a password to unlock again.

An application manager can also be used to monitor what kids have been doing on the device.

When the kids’ time is up, parents can switch the device to Standard Mode and use the Galaxy Tab 3 Kids like a regular Android tablet to access emails, the web and apps.

Samsung’s Galaxy Tab 3 Kids will be launched next week along with a range of accessories including an Interactive C Pen to allow kids to draw and write on the device’s screen.

Another accessory is the Kid Grip Cover which can protect the device, provide an easier way to grip the product as well as doubling as a stand.