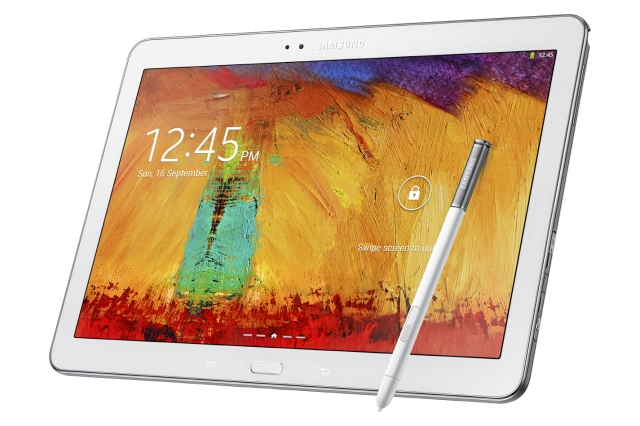 Samsung’s latest tablet – the Galaxy Note 10.1 2014 Edition – is a significant improvement over the previous version with added extras and sleek new look.

The device borrows heavily from Samsung’s popular Galaxy Note 3 smartphone both in terms of design and features.

It is also a shadow of its former self with the new version noticeably smaller and lighter with the latest model just 7.9mm thick and tipping the scales at 540g.

The Galaxy Note 10.1 2014 Edition has the same leather-like back panel as its Samsung younger brother the Galaxy Note 3 right down to the detailed stitching and leather grain look and feel.

It also has the same silver edging and an indentical home button and virtual key layout under the display.

Speaking of the display, the 10.1-inch display has a WQXGA resolution of 2560 x 1600 so your content will look sharp and clear.

The new tablet also inherits the same S-Pen stylus as the Galaxy Note 3 and it stores neatly inside the device in the top right corner until the user is ready to use it.

The S-Pen and the ability to write directly on the screen is what distinguishes Samsung’s Note tablets from its Tab range.

Users have the choice of using the Galaxy Tab 10.1 as a regular Android tablet but it also provides a tactile experience if you like the feel of a pen in your hand.

Apart from writing simple notes, the S Pen can be used to create charts, draw and paint and to also execute simple tasks through Air Command.

Action Memo allows users to write addresses and numbers that can be saved into your contacts or used to call, find on the web or on a map.

Scrapbooker makes it easy for users to gather information from the web and collect in one place. Simple circle a headline on a website with the S Pen and that link is placed into a scrapbook of your choice.

This is a handy feature if you’re researching a project or a new product to buy.

Screen Write lives up to its name and, when selected, snaps a picture of the screen which can then be written on if you wanted to draw on a map, write instructions or caption a photograph.

S Finder is an easy way to search through the content with your S Pen while Pen Window creates a space on the screen to run another application.

Once Pen Window is selected, the user simply draws a square on any part of the screen and selects another app from the list that appears in this space including a calculator, contact list and calendar for true multitasking.

Speaking of multi-tasking, the Galaxy Note 10.1 2014 Edition also makes it possible to split the device’s screen so you can run two full apps at once.

On the content side the device comes with My Magazine – an app that can gather content from your social media and news feeds and present in an easy-to-read magazine style.

Unlike the iPad Air, the Samsung tablet is designed to be used in landscape mode seeing the home button and logo are located along the top and bottom of the longest edges.

But that’s not to say you can’t turn the tablet on its side and view the content in portrait mode.

This was how we preferred to use it especially while writing directly on the screen as it felt more like a notepad.

But in this mode the user has to come to grips with the physical controls like the volume controls and home button not being in the right position.

And while the tablet isn’t always our first option when it comes to taking photos, it’s good to know the Galaxy Note 10.1 2014 Edition has an above average shooter that is as good as many smartphone cameras.

The device has done away with the proprietary connector/charging plug that was seen on the previous model and has replaced it with a microUSB port.

Also on board is a microSD card slot to expand the onboard 16GB memory and to make it easier carry around your favourite content.

There’s also a 4G version of the Galaxy Note 10.1 2014 Edition and it takes a micro SIM card to connect you to the cellular network to stay connected from anywhere.

There are a wide range of 4G/LTE bands where the tablet will work so it can keep you connected almost anywhere in the world.

The 4G version of the device will also work with the Samsung Galaxy Gear smartwatch so you can get notifications, emails and other alerts on your wrist.

Thanks to the 8220mAh battery onboard you’ll get up to two days of regular use but if your main task is watching videos and playing processor intensive games that will bring that down to a day.

The Samsung Galaxy Note 10.1 2014 Edition is a versatile device that offers all of the features of a regular tablet as well as the ability to write on the screen.

The device will suit a wide range of users whether they are creative or artistic or road warriors who are constantly on the go.

The S Pen makes is easier for any of these users to interact with the device and enter their information and sets the Galaxy Note 10.1 2014 Edition apart from its many competitors.

Samsung reveals the TV remote control of the future

You can win an LG Stylish Split System Air Conditioner